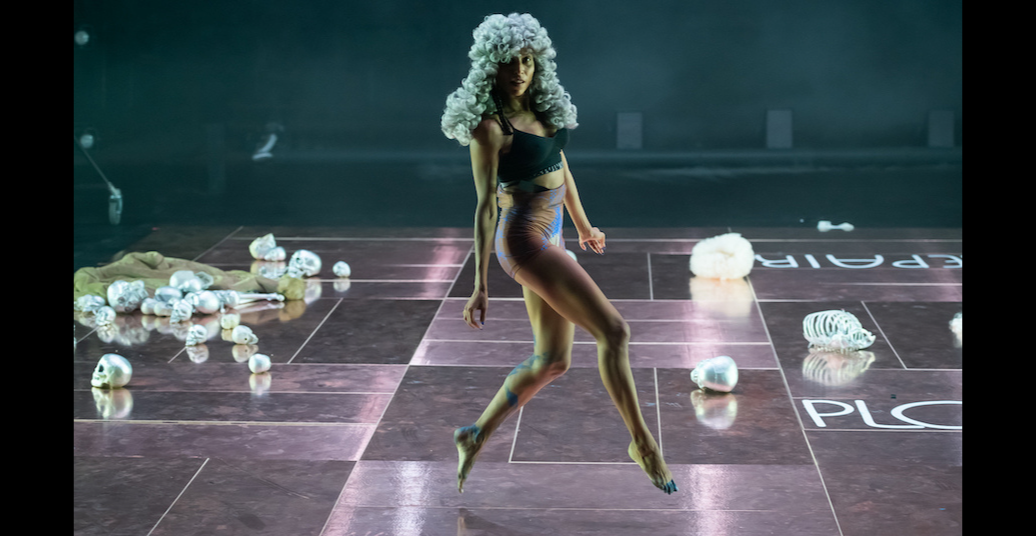 Ligia Lewis poses questions about destructing pre-existing plots and reconstructing new ones in “A Plot / A Scandal”, which premiered on 20 October 2022 at HAU Hebbel am Ufer.

In the artist talk after her performance “A Plot / A Scandal”, Ligia Lewis speaks about the starting point of the work. It was a movement study with an aim to stay in and work from the negative affects in her body. Reaching into this psychic space brought out the feelings of alienations of living as a black person in a world that is built on white supremacy as a norm. To live under this racial gaze that is inescapable. This trappedness made her want to destruct it all, the black femme representation and the history that created this stereotype.

The way Lewis chooses to break out of the cage built by generations of societal oppression is to finally take revenge. To release the rage and dismay, and to disrupt the “proper” orders in this personal world she creates on stage as the protagonist. When, on downstage left, a red neon sign that reads “Revenge” flashes on, she gets to action.

Lewis appears with a periwig and a long flowy gown. Underneath, she has only a white bra and white panties on. The accompanying sound of chirping birds and church bells reminds of a peaceful countryside. There are human skulls rolling around the floor, which Lewis kicks and stumbles around with comical exaggeration. She is holding a thin rod that is about a metre long, which, at one point, she pretends to hit the skulls with, as if playing golf. She falls on a big cushion on the floor, spreads her legs apart and kicks them up in the air. Then, she scoots on the floor with her butt, while her hands hold an imaginary horse rein.

After a short transition, to which I will come back later, Lewis teases the “servant”, Corey Scott-Gilbert, who brings out and holds up a plate of steak. She dramatically cuts and eats a piece as she gushes out “Deli——cious!” over and over again.

In the artist talk, Lewis names this humorous mimicry as “white drag”, in which she takes minstrelsy and turns it around. She comments how slaves had fun mimicking their masters in the time of slavery. I question if her decision to re-enact this past was an act of returning to the root cause of violence, which still breathes in our bodies and society. Or, was it a convenient option, as there exist multiple clichés to work with? Would this cynical representation of “the old times” make the white supremacy culture pat its own back for having moved onto the “better” times with “more racial equality?” What are the possibilities of bringing this picture of the past into the present tense? Was Lewis’s making and presenting of this work an attempt to criticise the contemporary troubles being carried on from the ongoing history of white supremacy?

In the next section, Lewis lip syncs and pretends to play the guitar and the flute along with the song, “Wild Thing” by The Troggs. I watch the music video of the song (Recorded in 1966) and realise that in the entire video, only white people are presented, although the video takes place mostly in a crowded subway platform. Is Lewis simply mocking this popular white culture? Or is she finally letting herself stand in the centre of the world that has erased her presence? Who is this “wild thing” that she confesses love to through the song? Black slaves who were degraded as “wild things”? Her rebellious great grandmother who practised Dominican Voodoo, despite the State oppression against it? Or, is it love for herself, through whom her great grandmother’s wild spirit lives on?

Now I am coming back to the short transition that I mentioned earlier. As the light dims and shadows move across the stage, Lewis gradually breaks her character of “white drag”. The balletic movements she carries out with a splash of sarcasm disintegrates into released movements free of forms. Her legs ground strongly to the floor as her arms flare out. Her face is animated in a series of soundless but dramatic expressions. I wonder who this is, what fuels these movements, and where the energy produced by these movements is channelled towards. I think about Lewis’s great grandmother.

When I ask about how she choreographed movements in this work, Lewis answers that it was an intuitive process of developing a physical language that expresses a physical narration. She explains how she tried to invoke the feeling of her great grandmother, who is “a figure Lewis turns to within her plot as a guide of resistance” (Quoted from the program note).

Towards the end of the piece, Lewis invites her great grandmother’s practice to take place through her body. After telling the story of her great grandmother, who lived in a small village near Haitian border and practised Dominican Voodoo as a way to “invite another form of life”, Lewis pulls up the blue dress she is wearing over her head. She takes a rod to dip its end into a bowl of white paint and splashes the paint all around the floor. She engages in fast and jerky movements and lets out a shout. She then dips her hands and feet into white paint and smears it on her body. The scene ends with her pulling up a banner from the floor that reads “Rest”. A spotlight shines on downstage left, where she brings the banner and sits with it, with an air of exhaustion. After this image sinks in, a yellow neon sign that reads “Repair?” flashes on, and the piece ends.

In the artist talk, Lewis says that the question of rest lies in the future: “How to create more safe spaces for us to rest?” How to find ways of rest and repair? How to rebel, make a scandal, plot against violence and oppression of the past and the present? These are the questions that Lewis raises through her work.