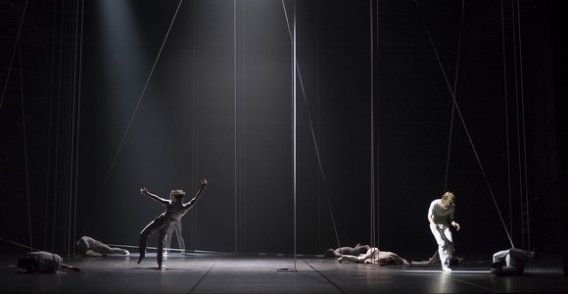 The Staatsballett Berlin closes its season—and its leadership by Nacho Duato—with a final programme of works from Gentian Doda, Marco Goecke, and Duato

Doda’s work, “was bleibt” (or, “what remains”), collaboratively created with dancers from the Staatsballet, opens the evening with a presentation of aesthetically striking snapshots. Bodies draped in white costumes cluster and break away from one another, sometimes moving in slow unison, at other times jittering in solos spread across the stage. The set, composed of suspended, moveable ropes highlighted by careful lighting, is beautiful, but, despite a few late-stage attempts from the dancers to interact with the suspended rope, doesn’t quite fulfill its interactive potential. The dancers are clear and precise in their movement, but are not quite as acrobatic or as embodying of the moments of contact and weight-sharing that the contemporary vocabulary and floorwork demands. Rather a sense of control over abandon halts movements from finding full expression, and the dancers’ relationship to the floor remains stiff: a hard surface on which they slide rather than one from which they melt into and regenerate. Doda’s title may reference that which remains or stays after the fact, but despite this theme things still remain too fragmented and disconnected in the end—we are given no causal event from which we can experience after effects, nor are the fragments decipherable enough to understand the void which brings them all together. As such, we are left feeling that we have seen an ambitious if not totally cohesive work from a young choreographer with much promise.

Goecke’s work, “Pierrot lunaire”, presents the most distinct and developed vocabulary, with his signature style of stiffened bodies and fluttering hands interrupted by precise travelling movements to the music of Arnold Schoenberg. Based on a poem by Otto Erich Hartleben, after Albert Giraud’s French original, Goecke depicts the story of a love stricken clown, lost to the reality of the world. Goecke writes that he bravely challenged himself to take on a renewal of this piece against Glen Tetley’s 1962, finding new ways to depict the story of Pierrot. The song cycle is in three major parts: in the first, the strolling scene of Pierrot in his engagement with the moon is set; in the second, the violence of nightmare emerges; in the third, Pierrot contemplates the lunar influence and his place in the world. With the poem spoken throughout the piece, Goecke provides a truly bizarre and absorbing picture, one which elides with, challenges, and brings out different aspects to the story. Though there are some beautiful Art Nouveau poses and arcs, the physical vocabulary remains specifically Goecke’s, and indeed it is this very stability and clarity of that signature that allows us to move with and against the text and music in a deeply enriching and interesting way. Goecke sets a stark stage with white balloons inventively and symbolically used as minimal set devices, and nearly identical, gender neutral costumes, with the character of Pierrot’s body painted in a white wash, so that he looks so slightly more sickly, more ghostly, and more detached than the others. Goecke thus present a thoughtful, well-crafted, and utterly strange German version of this story of enchantment, lunacy, and Eros.

“Por vos Muero” (“For your deaths”), by Nacho Duato, Artistic Director of the Staatsballett, closes the evening with 15th and 16th century Spanish music accompanied by an intermittently spoken text written by Garcilaso de la Vega. In this work Duato invites us to enter a historical world of music and dance—and, refreshingly, one not just filled with Christian Renaissance history, but also strains of Arabic, Jewish, and Greco-Roman cultures—through the lens of contemporary ballet: beginning with streamlined, angular movements to Baroque music, a stage transformation precipitates both a change into “period” costume and an alteration in choreographic style. Here, the dancing is not truly historical, nor are the costumes—but that isn’t the point. Rather, Duato provides us with some sort of historical fantasy, in which he has given himself free reign to do as he likes, mixing motifs to splendid, rousing music—and under this frame, somewhat like peeking into a fantastic old book, it’s an exceptionally enjoyable work in which we see the company dancers whirl, twirl, and flirt beyond all necessity but with great joy and virtuosity.

Inclusions of the spoken texts of the works of Goecke and Duato would be appreciated by the viewer, and the bigger problem of gender inclusion as we watch another full programme from male choreographers, remains unsolved. Still, the Staatsballett presents an evening of beautiful, polished work, and perhaps, with the coming inauguration of Sasha Waltz & Johannes Öhman as new directions, it will begin to expand its horizons and reflect more broadly the genuinely diverse and talent-rich city that it represents.