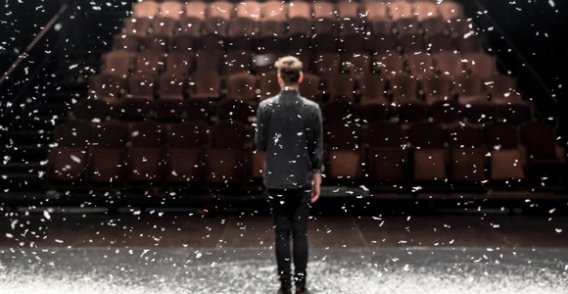 While the borders on the discipline of dance may have been blown apart some time ago, dance’s continuing envelopment of, dialogue with, and intersections into other arts pose a particularly challenging problem for the dance writer. On one level, broader definitions of dance open up a vast array of performances and exhibitions available to the dance writer, making the choice of what to take in and what to write about more complex, and simply, if wonderfully, overwhelming. On another level, when a show has been seen, the references that that show might encompass, particularly when a dance work is created from someone outside (traditional or non-traditional) dance training pathways the dance writers finds themselves facing a dance work with necessarily unfamiliar histories and allusions—an exciting if disorienting transdisciplinary challenge for the dance writer.

Such was the case when, last week, I watched Iggy Lord Malmborg’s “Physics & Phantasma”, a totally engrossing and brilliantly structured piece of theatre at the Sophiensaele Hochzeitssaal. Focused around the theme of fiction and fantasy, Malmborg’s work takes us through a series of conceptual scenarios which, prompted by his descriptions, we must envision together. Beginning with a blank stage, lights off, and only his voice, Malmborg describes himself, or a version of, in a sort of detail that ought to give us a good picture and yet, of course, still leaves us surprised when he eventually emerges, dropping us distinctly in the astonishing gap between one’s own mind and the mind of another. With this premise of fission, Malmborg thus artfully begins a series of imaginative expositions: for instance, he describes the vibe and actions of the audience waiting for the show to begin —we all laugh through the first and second picture he draws, with its sharp, comic accuracy; the third time we chuckle; the fourth we wait; the fifth we try to reengage; the sixth we think of something else; the seventh we question whether we agree with what he says; the eighth we wonder about other cities; the ninth we realize the story he is telling has shifted ever so slightly; the tenth we try to match our mind with his as it pulls to and fro. And then, just when a whisper thin layer of a thought floats into our minds asking how mental mechanisms work, he’s talking about physics. We find one another again in a fresh state, a hipster TED talk explaining how things move. But like much Youtube content, that which seems fresh and frank decays into hysterical magnitude and repetition until before us emerges left-fascism, anti-national socialist national socialism, with Malmborg veering between our appreciative acknolwedgement and support, and our total horror: that is to say, the terrifying superimposition of our face as the face of facism.

To bring things to pitch, however, Malmborg sets up two reasonable conceptual frameworks for examining the darker side of fantasy: the first, that through the telling of fantasy we posit robust, negative information into the world that can seed negative actions and consequences and thus it is damaging, and ill-advised, to share such information. The second (delivered through the ruffly body language of Zizek): that it is important to expose and examine the darker aspects of life to bring them out of the darkness and deal with them. And so, having disquietingly delivered us beers, Malmborg unfolds for us in precise detail his paedophilic rape fantasty, of which he is the boy; and later, he explains, also possibly the man. Here we are shocked by the detail: guilt can be delivered (who listens to this story all together in a group without saying anything? Without protesting? Without leaving? With beers, no less!), and relief (“He is the boy!” we sigh “He only wants to sleep with himself!”). We rail against this explicitness of the image braced against the conceptual frameworks he has just set up, most alarmingly: is he causing harm to us!? And will we cause harm to others? (Framework 1.) Or is this a good and important thing to expose? (Framework 2.) And here Malmborg’s show hinges on its titular themes: we see the swing of the physics of storytelling here, of the wily, entropic, and yet absurdly precise imaginary, a philosophical picture of our distinctly political moment.

A bang goes off. Space and time fly apart and come together hard, simple, and heavy. For the first time all evening we experience objects, we experience others. We see the physics, or, depending how you see it, a fiction of that which is light, that which is bright, that which makes an arc, and these objects are lovely, but their visuality—after seeing so much through our imaginations—seems absurd, out of place, almost petty. In doing so, we realise we have shifted our value, and our first impulse, away from the usual visual demands and delights to our speculative, vivid, morbid, challenging, prejudiced, wonderful, open, flexible imaginaries.

Malmborg’s piece may not be a dance work, but his work is beautifully, exactingly choreographic. Fellow Swede Martin Spamberg wrote that choreography is not entertainment but a “tool for organising time and space”*. Here, Malmborg has not only shifted space and time (sometimes generously, sometimes cruelly), but succeeded in shifting the way we perceive, prioritise, and process our experience around, inside, and between us. In this sense, Physics and Phantasma is a disruptive, startling, and multifaceted triumph of performance.