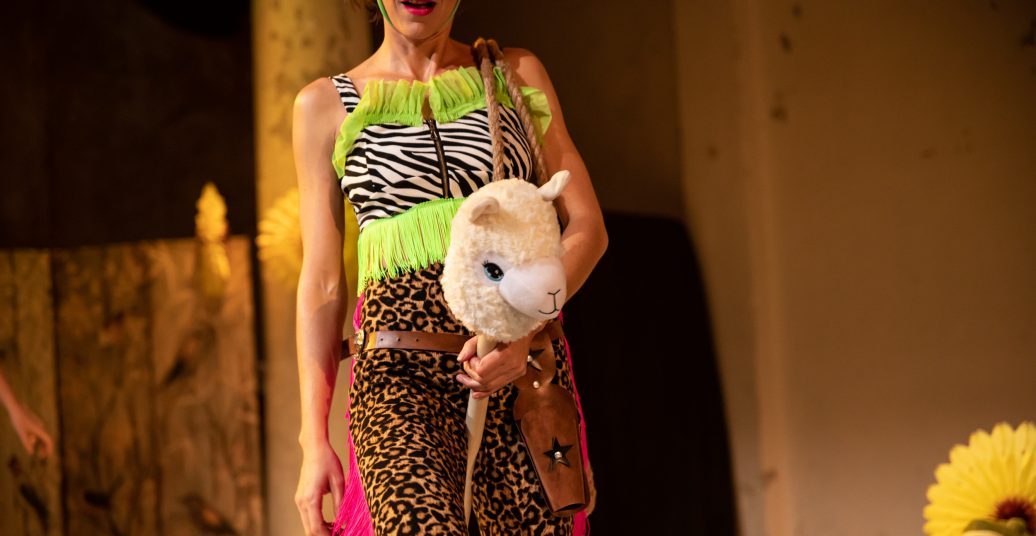 Anajara Amarante’s “Butching Cowboys” played at Sophiensæle as part of the Queering the Crip, Cripping the Queer Festival from 15 – 17 September 2022. Part of the festival’s larger creation of an intersectional queer-crip space, the performance modeled care for everyone in the room.

As we waited together to have our tickets checked at the entrance to the theatre, a friend of a friend, someone I’d just met moments before, expressed relief at being in a queer space. They’d just spent three days at a stifling academic conference by turns enduring and clapping back at a variety of chauvinist and racist aggressions and they were ready to relax. That they felt they could say all of this in passing to me, a stranger, was one of the effects of announcing the space as such. Simply by being there—by having accepted the small contract implied by a ticket to a festival called Queering the Crip, Cripping the Queer—I had their trust.

“Butching Cowboys” began with a slow setup of what felt like a child’s room. Choreographer and performer Anajara Amarante, in housewife drag with a blonde wig and walking measuredly in heels as if in danger of toppling, set stuffed animals around the performance space—Sophiensæle’s Kantine—while we listened to an intro, read in a calm and soothing voice, consisting of words that on paper might come off as a series of confrontations. One such confrontation was aimed more or less directly at (as a cis woman who loves cis men) the mes in the audience: the straight people were being outed tonight, the voice said. But I have to say I never felt outed, never felt confronted, never felt anything but gentleness towards me and everyone else gathered there.

Among the plush toys and plastic flowers, a scene unfolded that caricatured the violence of a relationship modeled on heteronormative tropes of masculinity and femininity to a backdrop of projected clips, cut together from primarily South American television, underscoring these tropes. After this, the performers pronounced the cowboys butched and traded in their hetero drag. The child’s room came to life, and the stage swirled with rainbow cowboys/girls/people on hobbyhorses, paper confetti, bananas that stood in for guns. In spite of the assless chaps and the eventual, inevitable suggestive eating of the aforementioned guns, the overall flavor of childlike innocence never dissipated for me. At the center of the performance was an exegesis of Amarante’s childhood, the expectations and the prejudices and the threats that painfully contradicted their identity and denied the realities of their body. While the text that directly addressed this was also, on paper, confrontational and angry, in performance the strongest sensation that came across to me was yearning, even nostalgia—not for what was, but for what might have been, if Amarante’s childhood had been a safer space. If the real space of their childhood in Brazil years ago had had more in common with this performed childhood room we were all in together, for a short time, on this September evening in Berlin, in the year 2022.

Because theatre lives on creating occasions for gathering and communing that have their own sets of ground rules, expectations, and conditions, it seems to lend itself naturally to the making of safe(r) spaces, at least on the surface. This is ultimately a repurposing of an institution, so you have to be careful about how glibly you take the transference, since the frictions and contradictions start to arise at the level of actually implementing a space—and they won’t be the same ones for a queer space as they will for a crip space. The festival that included “Butching Cowboys” was an attempt to create both, and what was palpable for me was the intention towards care. It’s not that care can’t be confrontational—real care often does require pushing back, hard, against violence and hate. But in safe(r) spaces like this one the contract is that the violence is outside of the room, that the traces of it that cling to all of us in one way or another won’t be activated here.

Confrontation, therefore, felt like make-believe to me in this construct. But care felt very real. The culminating scene of “Butching Cowboys” was a dance party in which Amarante and their co-performers Tizo All and Suzanne Stavast modeled a move for us all that we could do ourselves from our seats. Amarante interrupted Stavast’s explanation of the move briefly. “I’m really tired,” they said. “Can I do it from the floor this time?” “Of course!” Stavast exclaimed into the mic. “We’ve done three performances today,” Amarante said to us, the audience—an explanation but not an apology. Then All, Amarante, and Stavast danced: each moving one part of their body and pointing to it as they did so, creating a tiny spotlight on knee or buttock, foot, stomach, nose. It was something everybody could do. And it looked like fun—like something I wanted to try. The invitation, though, seemed to hang in the air, mostly unanswered by us in the audience. A few of us wiggled toes or nodded heads to the beat, no more. I doubt that this subdued audience response to the show’s climax had much to do with not feeling safe. On the contrary: comfortable in our seats, indulged by our performer-hosts, a bit of a push would have been needed to get us really moving in that context. But maybe some of us will give it a go next time we need a dance move.

“Butching Cowboys” by Anajara Amarante premiered at Sophiensæle on 15 September 2022.

The festival Queering the Crip, Cripping the Queer takes place at Sophiensæle, in cooperation with the Schwules Museum, which presents the exhibition of the same name from 1 September 2022 to 30 January 2023, and questions the fantasy of the ideal body with artworks by 24 international contemporary artists.