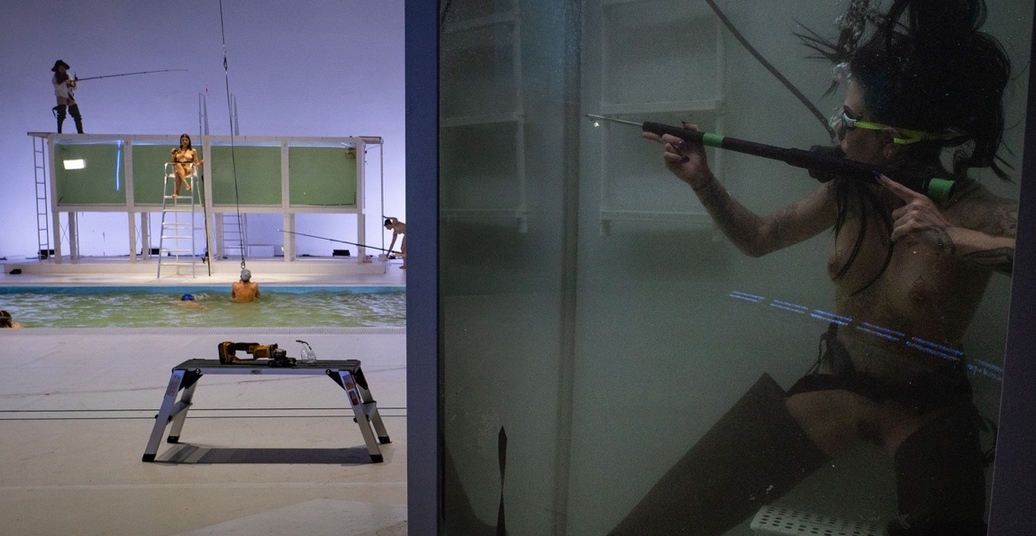 Watching the premiere of Florentina Holzinger’s “Ophelia’s Got Talent”, I was reminded of an essay I once wrote that, using Ophelia in Shakespeare’s ‘Hamlet’ as an example, argued how women were drawn in fainter lines than their male counterparts. Nowhere is this further from the truth than in Holzinger’s show, which takes a fat marker pen to her name and, indeed, the name of every woman that has ever lived in her wake. Premiering on 15 September 2022 at Volksbühne am Rosa-Luxemburg-Platz, “Ophelia’s Got Talent” opened the season with a celebration of womanhood that shouldn’t be missed.

In the foyer of the Volksbühne I find a stall selling “Ophelia’s Got Talent” merchandise, from branded T-Shirts to matching tote bags. Then, when I pick up my ticket, I am handed a poster and a bookmark in lieu of a programme and a cast list. Clearly, this is a show that is not embarrassed about self-promotion. Rather, “Ophelia’s Got Talent” champions putting oneself out there to excruciating lengths, and in both senses of the word.

More than a dozen women push themselves to their physical, emotional, and psychosocial limits in a talent show that, in looking for ‘The XX Factor’, combines dance, stunts, and sideshow-inspired acts. Indeed, it soon becomes clear that there is not a Y chromosome in sight in what proves a multi-generational, all-female, and entirely nude cast. Even the scowl of Simon Cowell has been replaced by the empathetic smiles of three female judges (Inga Busch, Renée Copraij, and Saioa Alvarez Ruiz), who watch on from their white leather armchairs, hands on buzzers, butt naked. For nudity is Holzinger’s great leveller of life. And one that, bar for the handful of minors that later take to the stage, is embraced by every performer whatever their size or shape. So much so that as I watch them perform in the raw and unforgiving flesh, I cannot help but feel like something of a fraud for all the layers I am wearing—both literally and figuratively speaking. And I suppose that is what Holzinger does so well: remind her audience of how cloaked they are in their own insecurities, inhibitions, and fears.

Of course, it is not long before the show’s host (Annina Machaz)—a Captain Hook-like character with a father complex—asks someone from the audience to volunteer themselves from the crowd. At which point, we are all given the opportunity to be as brave and as brilliant as the women we see before us. Such is Holzinger’s invitation with her show. While we may each have our own talents, though, they are far from the eclectic and eccentric mix of Machaz’s motley crew: from the aerial pole dancer, Sophie Duncan, with her gravity-defying grace to the sword-swallower, Fibi Eyewalker, with her gag-defying gullet. Then there’s the escape artist with her bottomless lungs, who, in a staged near miss, tries to unshackle herself underwater with only a hairpin to hand. Not to mention the dancer Xana Novais, who, with the power of her “iron jaw”, hangs from a rope by only her teeth inches from the ground. And this is to say nothing of Saioa Alvarez Ruiz and Zora Schemm who perform both demanding and dangerous acts despite their disabilities. How in the world did Holzinger manage to put such an accomplished cast together?

A good deal of them she found on Craigslist, apparently, after advertising for “women with special talents”. ‘Special’ is certainly one way to describe their skillsets. And yet there is something else going on here, as I find myself simultaneously looking and not looking at the spectacle before me, at once applauding and squirming in my seat. Something equally admirable and uncomfortable. Alluring and uncouth. For Holzinger’s stage is a laboratory of sorts, where taboo acts are tested out on an unwitting audience: from pulling fishhooks through their skin and tattooing each other’s backsides to climbing aboard a life-size helicopter and riding it until orgasming. Never have I seen so much cum, let alone ejaculating from an auto-erotic aircraft. Admittedly, we, the audience, seem to be Holzinger’s guinea pigs and guinea pigs that she is prepared to sacrifice for the sake of her art. Let’s say, reports of people walking out of her performances have not exactly toned down her work over the years. Rather, “Ophelia’s Got Talent”, just like its predecessor productions, is about understanding what audiences as much as performers can endure. Did I mention that the show’s running time is just shy of three hours? Not that I would have noticed, if it weren’t for my bladder. (The numerous receptacles of water on stage certainly didn’t help!)

Apparently, “Water” was what the show was going to be called before Holzinger settled on ‘Hamlet’s’ heroine. After all, “Ophelia’s Got Talent” is as much an exploration of myths about water as it is women: from wasted seafarers singing “What shall we do with a drunken sailor?” to washed-ashore mermaids struggling for breath. While, historically, water has always been a harbinger of death, Holzinger turns this symbolism on its head to look at how we in turn are killing our seas. From our excessive use of energy and its acceleration of the climate crisis to our careless throw-away culture and its pollution of the ocean with microplastics. Nowhere is this more redolent than when a cloudburst of plastic bottles lashes down from the fly-tower and into the now blood-and-cum infested swimming pool below. The stage is a mess. And a mess that we ultimately leave to the next generation…

Holzinger’s parting image in “Ophelia’s Got Talent” is of a gang of young girls, dressed as a shiver of sharks, splashing about in the wreckage of a world that we have left them. And all to the sound of Ed Sheeran’s “Bad Habits”. It’s sobering stuff. But then something about their spirited play tells me that, together, they’ll find a way. For these girls, much like their forbears, have more than talent.