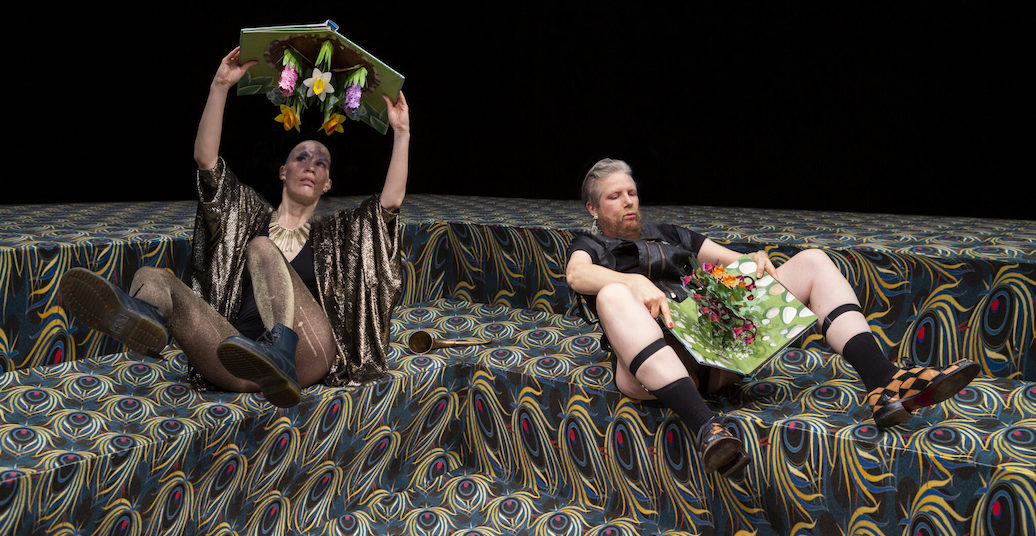 In “Die Hörposaune”, Werner Hirsch (alias Antonia Baehr) and Jule Flierl drive audiences into a sonic exploration of bodies, objects, and textures. Without saying a single word in a recognisable language, they communicate a scholastic enterprise that is both serious and humorous at the same time. The performance premiered at the 1929-built silent-cinema theatre, Theater im Delphi in Berlin-Weißensee.

Walking through the thick folds of the curtains at Theater im Delphi, I find myself in a charming relic of the previous century. However, the grand brick-walled proscenium of this silent-film-era cinema don’t hold my attention for long. Rather, my eyes are drawn immediately to the peculiar stepwell that has been constructed in the seating chamber. A peacock-feather-patterned fabric spreads across every surface of the stepwell. I climb down into it and take a seat, donning one of the pairs of headphones for audience members attending “Die Hörposaune” (The Hearing Trombone). As I stroke the peacock carpet and the performers walk in, the sounds coming in through the headphones give me the sensation of entering a cave of textures.

Drag King Werner Hirsch (alias Antonia Baehr) and Jule Flierl acknowledge each member of the audience with eye contact before opening the thick, black-bound books that are laying near them. Seated together on the steps, the solemnity of the moment feels like that of a parliament or an academic conference. Here, we are gathered, all-knowing, for some serious and noble reason. When Hirsch looks intently over his scholastic spectacles, I expect something of great importance to be uttered. What is spoken by the two performers, though, with most earnest expressions and a calm sincere lilt in the conversation, is pure gibberish in a made-up language. The contradiction is hilarious, but also re-tunes my ears to pick up the sounds as they are, without ascribing meaning or my emotions to them.

The two performers wear highly sensitive microphones that convey the most delicate and minute sounds from their mouths straight into our headphones. The audience hears not just speech sounds, but also the gulps, dripping saliva, and plops, grunts,and clicks in their mouths. The sensuous sounds are alluring, triggering me to gulp myself. Within the confined sound-space of the headphones, I hear my own wet gulps as loudly as I hear theirs. When Hirsch and Flierl burst into fits of laughter (or rather just “haha hehe huhu”, sounds that I associate with laughter), the sounds appear to originate from different parts of their voice boxes. An activation of the backs of their throats, their nasal cavities, foreheads, and larynxes brings about an uncanny animalistic quality to their erratic squawks. These bursts of sound are punctuated by salivating silences.

In another moment in “Die Hörposaune”, the performers put an additional set of highly sensitive microphones into their underpants. The sounds that now reach my ears make me all the more aware that human bodies are operatic sound machines.These gurgles, churns, drips, quips, and ticks from the bodies of the performers especially engross me. These resonant sounds indicate a world of textures, colours, and movements. Emerging from the inner world of Hirsch and Flierl’s bodies, they tickle the fine hairs in my inner ear and echo in my own body cavities, blending with the sounds within. As Flierl continues to speak in gibberish, we hear her spoken voice through the sensitive microphone echoing in the cavities of her belly and guts. I am struck by this moment and the question it brings up: How does the body sound to itself? For instance, how do my shins hear a gulp in my throat? How do the sounds of the gradual growth of my wrist bones echo in my kidneys?

“Die Hörposaune”, then, brings greater dimensions to our perception of the human body. Beyond being a unitary organism, it becomes a collection of bones, muscles, and fluids that are forever moving in each other’s vicinity. Limbs, head, and torso simplyform additional surfaces and textures, offering new bends for sound to travel through, bringing about echoes and refractions.

Continuing in gibberish, Hirsch and Flierl read aloud from a series of pop-up books, their fingers following the words as they read. The pages of the open books project upwards into representations of flowering bushes, human digestive tracts, and vulvas. Hirsch and Flierl trace the various textures and colours coming off the pages with their hands — cellophane, tracing paper, velvet, and lace, among others. The performers appear to move through physical states, modulating their facial muscles and tongues in connection with the textures. In sonic resonance with the large fleshy pages in front of them, and from inside the stepwell of peacock feathers, they begin to emit different sound responses from their mouths. The sounds emanating from within, although they are now muted to our ears, most surely continue.

I carry “Die Hörposaune” away with me in my mind as a symphony of sonic patterns — aural ink blots like a Rorschach test with no book of correct interpretations. That night in bed, I press my ears against the pillow and listen keenly to the squeaks, plops, and howling winds inside the chambers of my body.