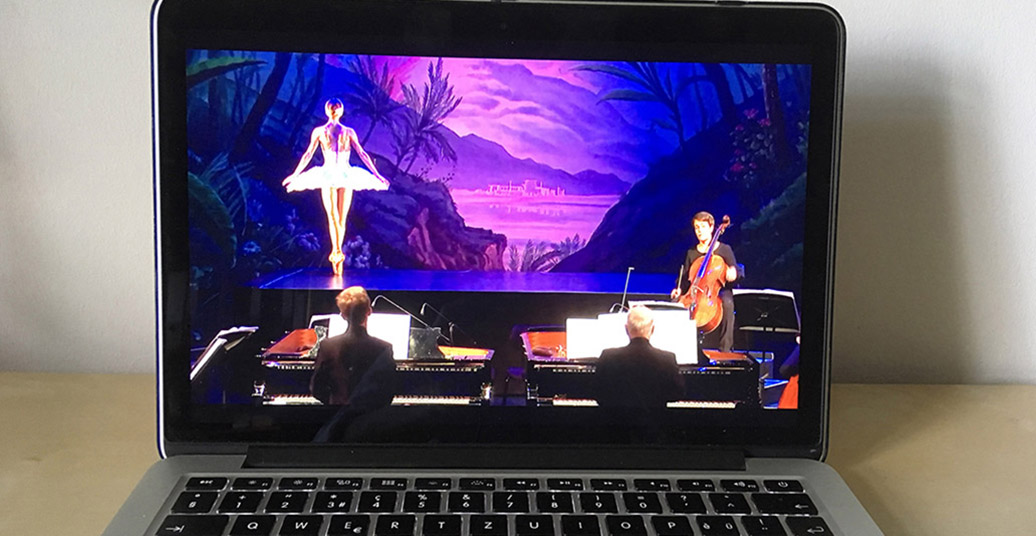 Event cancellations due to Covid-19 measures didn’t just affect the dance scene. How did major theaters respond during the pandemic? A brief glimpse at the Staatsballett Berlin to mark Polina Semionova’s appearance in the concert performance of Camille Saint-Saëns’ “The Carnival of the Animals” at the Staatsoper Unter den Linden.

The pandemic also forced larger theaters to find new ways to reach their audiences. The Staatsoper and  Staatsballett opted for different streaming formats – including the current multi-discipline concert program available on their website. The fifth concert – available until Friday 19 June 2020 at 7 pm via video-on-demand – might also appeal to dance enthusiasts. Camille Saint-Saëns’ “The Carnival of the Animals: A Great Zoological Fantasy for Chamber Orchestra” includes a ballet archetype, one which has been residing in our collective subconscious  since the beginning of the 20th century. We’ll reveal which one later.

I have to admit: I didn’t know what to expect when I read the evening program. Daniel Barenboim and Thomas Guggeis sit at pianos in the empty Großer Saal of the Staatsoper Unter den Linden surrounded by other members of the Staatskapelle Berlin. And Jan Josef Liefers has been billed as the narrator of Loriot’s text and Polina Semionova as the swan.

The brief text interludes from Loriot bringe the empty chairs to life: we are suddenly amongst an audience of loud, colorful animals. Troops of dancing turtles, donkeys, and hummingbirds take turns prancing across our inner stage. An elephant floats in. I notice that I had already internalized a number of melodies without ever realizing they belonged to Saint-Saëns’ work. The characters read my thoughts as they repeatedly ask when the swan will finally arrive. It took until the middle of the half-hour concert for me to realize they were talking about the most famous ballet solo ever: Mikhail Fokine’s choreographed solo of “The Dying Swan” for Anna Pavlova, first performed in 1905 at the Mariinsky Theater.

It was performed over 4000 times all over the world by the ambassador of ballet and former mass media sensation Pavlova. And wherever Pavlova didn’t manage to go, the Hollywood screen adaptation “La Mort du Cygne” from 1925 went. It’s finally here. At the very end and only 3 minutes long. Semionova glides on her toes onto a tiny platform behind the musicians. She danced incredibly well, but I’ve experienced more fluid arm movements from her. The musicality of her interpretation impressed me most. I’ve often seen the solo with recorded music.  However, experiencing it accompanied by cellist Sennu Laine was absolutely compelling. It was a painful moment as the performance came to an end and everyone bowed to an empty hall and no applause. Something key was missing. It must be strange to dance in front of empty seats, unable to feel the energy of the audience. The audience gathers on the Internet as the performance is streamed online, thus reaching more people possible than in the theater (over 11,000 hits as of today).

I myself recommended the performance to a number of families with small children that most likely would not have gone to the opera. Ballet, with its fourth wall illusion, should be more suited to streaming than independent scene performances. Yet something was missing.

Like many during the pandemic, the Staatsballett Berlin tried out a few things. Repertory recordings of Patrice Bart’s “Swan Lake” and “Nutcracker” were streamed along with short screen adaptations of recent rehearsals before the closure. There was also an ad-hoc social media program with short video compilations of clips featuring dancers during their training as well as other individual initiatives by dancers, like a chain choreography and a pointe-shoe collage posted on Facebook and (the super stylish) Instagram account. Daniil Simkin as a confused Solor from “La Bayadère” who is not allowed to perform, or as Basilio from “Don Quixote” who tries to FaceTime with Kitri (Maria Kochetkova), are especially funny. Ahead of the partial opening – the dancers are once again in studio training – you could regularly train with one of the soloists on Instagram. “The Carnival of the Animals” was an occasion to get away from this keyhole perspective and see the dancers in action once again. A solo is certainly the best solution right now, at a time when we have to maintain distance –but the Staatsballett seems to be cooking up something else. And it’s worth keeping our eye on them. (Of course the question of the new  directorship is still open. However, no news has been made public.) My conclusion: we’ve seen enough behind the scenes. It’s about time to start dancing in front of them again.

Click here for the video-on-demand stream of the Staatsoper Berlin (available Friday, 12. June 2020, 7pm until Friday, 19 June 2020, 7pm) >>> Camille Saint-Saëns »The Carnival of the Animals« under the musical direction of Daniel Barenboim, with Polina Semionova as the swan and Jan Josef Liefers as the narrator.