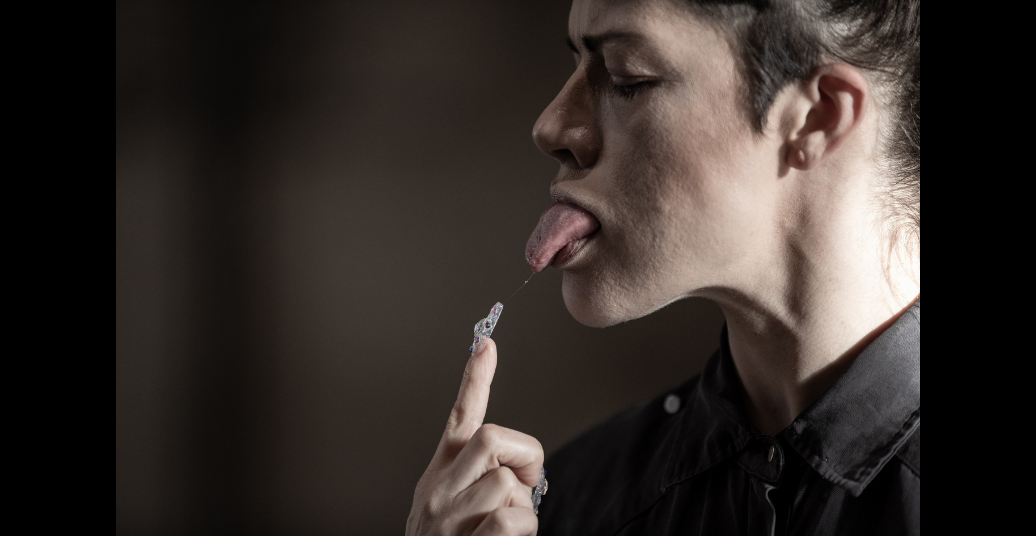 TANZPLATTFORM 2022 >>> In “Overtongue”, Michelle Moura carries her audience off into the polymorphic world of ventriloquism and dissociates the perceptions of sounds and physicality. The performances from 23 to 27 April at the Sophiensæle will take place as a follow-up to Tanztage Berlin 2022.

The Hochzeitsaal at the Sophiensæle is dimmed. Black curtains frame the dance floor. A purple, glittery marley is laid out on the black vinyl floor that fills the entire room. Electronic organ tones emanate from the loudspeakers (sound design: Kaj Duncan David). Michelle Moura emerges from behind the curtain in short, dark pants and a cropped gray shirt, with fringes hanging down. She’s wearing green knee-high socks made of satin on her legs (costume: Thelma Bonavita). A microphone is attached to her forehead with a piece of red tape. The stark contrast makes it appear like an alien body (makeup: Kysy Fischer). Michelle Moura now stands on the purple marley and looks the audience in the eyes, one by one, including me. The studio light is focused on her and casts shadows on the floor. Three shadows seem to stick directly to her, two others are a bit farther removed (light design: Annegret Schalke). Michelle Moura inhales, grabs her stomach, reaches into her mouth with her fingers, bangs on her teeth with her fingers, pulls her mouth apart, sucks on her fingers,  smacks her lips.

Vowels resonate from the loudspeakers, from her stomach? I ask myself where the sounds are coming from, even though I read in the program that the performance would involve ventriloquism (text: Maikon K., Michelle Moura). Moura lets both her hands communicate with one another: “I like it.” – “I really like it.” – “So beautiful!” – “Really beautiful!”

Michelle Moura taps the microphone on her forehead with her hand while grabbing her crotch.

She clears her throat, dances from left to right, turns in a circle. Her body appears to take on a life of its own, preoccupied with soliloquies and speaking in tongues, speaking in Brazilian Portuguese, then once again in English: “Com vôce”, “… and now in English!”

Michelle Moura jumps from the purple to the black floor, the light changes to blue and the room gets even darker. The tone of the voice from the speakers is now pitched, distorted. Moura mimes sweeping movements and dances in circles in a samba variation, accompanied by carnivalesque techno music and with the light strobing in circles.

A telephone rings from the loudspeakers and surprises the viewers who start laughing as a result. Michelle Moura pulls on the fringes attached to the breast pocket of her shirt and onomatopoetically imitates the mooing of a cow. The doorbell rings. Moura lies down on the purple floor and jerks, imitating a barking dog. Her body is a sound machine that leads its own life as a chimeric organism.

Laughter from the audience. She strokes the floor with her hands. Then she lies motionless.

There’s a knock. The body stirs.

“Constantly penetrated. Every day, every second, you are being penetrated. The birds in the sky, the president, they are penetrated … by an invisible demon. You are conducted to this pressure.”

Michelle Moura fires all around herself with an imaginary limb weapon.

Followed by the three shadows on her body, she walks off, staggering through the curtain. “It’s a miracle, it’s beautiful.” Applause.

Voices, speech sounds, words, noises, tones penetrate our bodies every day, filling them with vibrations, guiding them, corroding them. Although the sounds often appear to have no meaning, or precisely because they have no meaning, they are fascinating. It is through the multitude of bodily orifices that living beings communicate – with each other, against each other, directed from outside, onomatopoeically, with voices, noises, signs, touches. Speech can turn into intentional acts, political, powerful, encroaching acts, illocutionary speech acts with future consequences. There are words, which appear empty and hollow, which seem removed from our longings, desires, needs. And there are those with symbolic, psychic, and physical power – “You are conducted to this pressure, all the time, every second.”

Michelle Moura investigates these various forms of communication and the dissociative formation of sounds and vocality and keeps us viewers guessing about the origin of the sounds, although sometimes her mouth moves in sync with the spoken words and phrases and engages in a polyphonic, overlapping dialogue with the sounds emanating from the loudspeakers. The content of the individual word fragments breaks down into an entire text when read in hindsight. Her polymorphous hubbub is underscored by the extensions that cling to her body and to her clothes: the fringes, ribbons, and shadows. I could’ve watched and listened to her a while longer, how she and her body – preoccupied in their own worlds – mimed protagonists and antagonists while simultaneously dismantling both these attributions.

„Overtongue“ by Michelle Moura was shown in the frame of the Tanzplattform 2022 on 19 & 20 March at the Sophiensæle. Since the position could not be presented in January at the Tanztage Berlin 2022 due to pandemic, “Overtongue” will be shown again at the Sophiensæle from 23 to 27 April.