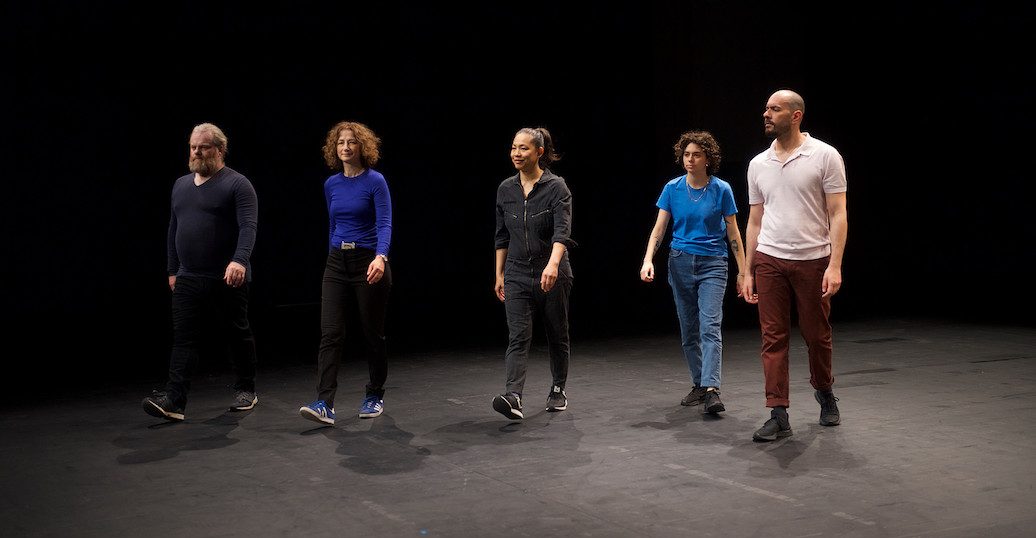 At the Sophiensæle, Saša Asentić, together with Diana Anselmo, Scarlet Yu, and Alexandre Achour, render the score from Le sacre du printemps in the language of movement while simultaneously criticizing the ableist and classist structures that persist in societies.

In 2007, Xavier Le Roy used Igor Strawinsky’s composition Le sacre du printemps – composed in 1913 for the ensemble Ballets Russes by Sergei Djagilew – to explore the movement of a composer reading the score to conduct an orchestra. In his solo performance, Le Roy questions this binary division of roles in an orchestra and plays with the forms of sound and movement. For his variation of Le sacre du Printemps, Saša Asentić borrows this idea and merges it with sign language gestures. He worked with deaf and hearing performers and access experts from the start to accomplish this.

It is already after 7pm and the audience is quieting down. The studio lights are still on. Five people appear on stage in everyday clothing. They walk across the velvety gray marley, which is roughened in spots from earlier movements, and take a seat in the first row. Saša Asentić stands in front of the audience along with sign language interpreter Mathias Schäfer and reminds us that four disabled people were murdered by a caretaker in Potsdam one year ago. The systematic murder of people with disabilities is not a rare occurrence, especially with ableism so widespread. This is followed by an introduction to Igor Strawinsky’s composition Le sacre du printemps and a definition of score and composer in simple language. The choreographies to come will be based on these movements. After Saša Asentić and Mathias Schäfer have left the stage, Oya Ataman reads the same text from a smartphone in spoken English. Thereafter, the studio lights are dimmed for a brief moment.

One after another, Diana Anselmo, Scarlet Yu, and Alexandre Achour present themselves and their biographic backgrounds. The sharing of the performers collective experiences during the rehearsal process provides a glimpse into the difficulties and possibilities that arise when sign structures have to be learned or relearned. For instance, Stravinsky’s score and the gestures of a conductor were at first a “mystery” to Diana Anselmo, who was born deaf, until she constructed her own “alphabet” for the sounds and movements, one that would “make sense to deaf culture as well.” For Scarlet Yu, Xavier Le Roy’s choreography was a source of inspiration since she herself could not read the notes and her social background during her childhood in Hong Kong meant she had not been exposed to the ballet Le sacre du printemps – as well as many other “Western orchestras” – an educated bourgeois “symbol of high art”. Both performers saw the score, or rather their performative interpretations of it, as “maps”. As the child of an an Algerian-Jewish family that had fled their home and “[assimilated] the French culture”, Alexandre Achour was already studying classical music at seven years of age. Nevertheless, it still seemed foreign to him. Since music notes filled him with “fear” he let himself be guided by the music in the selection of his part of the piece. He chose a part that “elicit[ed] in him a desire to move”. The Italian and German sign language statements are printed as transcripts on slips of paper for the audience to take at the entrance. The audio description is also projected on a black wall behind the marley.

One by one, the three performers start by presenting the parts of Stravinsky’s Le Sacre du Printemps they have chosen. They translate the music notes and dynamic signs in gestures. Thumping, balled fists simulate the beating of a drum and sweeping horizontal arm movements represent string and wind instruments. The movements remind me of Isadora Duncan’s choreography, which was already conveying feelings into rhythmic, expressive movements back in the 19th century and influenced the character dance of the early 20th century. After their solo performances, the performers appear on stage together in threes, twos and once again individually to interpret the selected scores, sometimes with and sometimes without musical accompaniment. They circle around their own axes and jump. They incorporate their faces, eyes, mouths, and tongues to emphasize their emotive movements, which alternate between intense crescendos, punctuated accents, sharp dissonances, and abrasive thirds. Their vibrating hands and the glances they cast at each other create a tension and evoke the impression that people and musical instruments are indeed communicating, alluding to one another, and complementing each other. From the front row I hear a voice from the loudspeakers, which probably translates the stage action into spoken English. However, I can’t make out the details. I ask myself how the voice manages to transmit the variety of movements into spoken sentences, but the same question applies to written dance reviews. Nevertheless, without interpreters who are capable of reading them, scores are “merely” characters on paper that may “only” spark aesthetic references. Translation processes are always a question of perspective, selection, and interpretation. They often assume a mastery of the conveyance of signs achieved by the learning of sign and spoken languages, reading and writing, choreographies and scores, social conventions and behaviors and through access to education. In order to address the many translation processes and hurdles, Saša Asentić developed his variation of Le Sacre du Printemps together with the deaf and hearing performers and access experts. Together, they researched the scores and choreographies, shared their knowledge. And during this premiere on the evening of 28 April 2022 at the Sophiensæle, they were able to make them accessible to their deaf, hearing, blind, and seeing audience in a way that was critical of both ableism and classism.