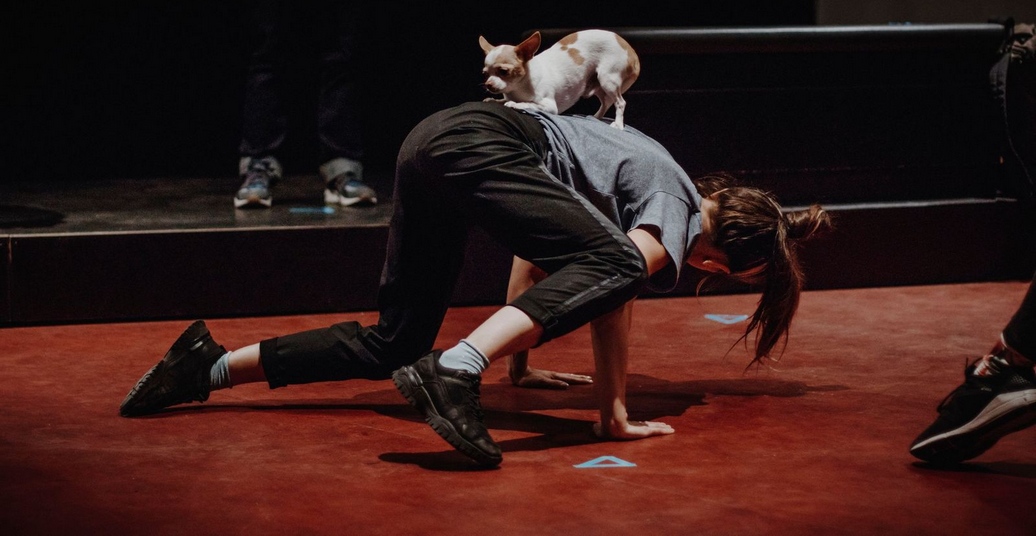 Rounding off the five-week SUBMERGE Festival 2021 at Lake Studios Berlin, Barbara Berti lets us participate in her performative work with dogs in “DOGOD. The Situation”, and we are all ears.

Alongside bits of recited text and the breathing sounds of the three performers (Rocio Marano, Paolo Rosini, and Barbara Berti), the tippytoe steps of the chihuahua as she walks across the wooden floor of the dance studio and curiously sniffs the audience’s shoes are especially audible during the nearly one-hour piece. “DOGOD. The Situation” is performed completely without music and, as a result, creates a mindful atmosphere of concentrated togetherness, which allows people, animals, and space to connect.

The performers’ slow movements are coordinated and it is evident that the empathetic interaction with the four-legged performers is based on trust. The three animal performers (Rudi Pistacchio, Boki, and Lilli) were cast by Barbara Berti since she doesn’t have her own dog. She does, however, have a way with dogs, which is how the two chihuahuas and the poodle ended up in a sort of therapeutic treatment with her during the rehearsal period. Small dogs can also have physical trauma, she explains in an interview. She uses massage and ample attentiveness to not only establish an emotional connection to them, but also to help them feel physically well and safe in general. As viewers, we can look on in wonder at how relaxed the dogs are during the piece as they surf on the backs of the performers or calmly run across hips and limbs from one person to the next.

Their good-natured and confident ride atop dancing bodies brings a new perspective into play. If dance is the relationship between bodies and space, we initially find ourselves in the unfamiliar situation of having to situate a small four-legged animal body within this system of relationships. It is precisely this scenario, which opens up an exciting field since the careful movements of two performers no longer constitute a duet but rather a trio when a dog is balanced between necks and shoulder blades. The human bodies are defined and guided in their movement exploration by these animal beings. We now view dance sequences without dogs differently, at least this evening. In this sense, Barbara Berti has broadened the relationship to space, which is tirelessly explored in contemporary dance, to include a cross-species dimension.

It is also exciting to observe the animals’ own observation of the performative happening. It is not just their cognitive focus, but also their whole bodily attention directed towards the situation. That this is inspiring for an artistic process, which places the body at the center of it all, becomes more obvious than we might have originally thought.

The Italian artist, who resides in Berlin, sees her work as a performative practice, and it becomes quite obvious that her choreography is influenced by, among other things, contact improvisation, somatics, and a curiosity about the deeper understanding of relationships. For this evening at Lake Studios, she conceptualized a clear choreographic structure with her human performers Rocio Marano and Paolo Rosini. As the title, including the wordplay between dog and God, suggests, the audience playfully experiences different situations and, in particular, the poses of various bodies as they casually explore spatial togetherness.

In the program text, Berti writes that physicality is a means of spatial communication for her and is thus an expression of one’s own territory in place of identity. She links this understanding with Donna Haraway’s call to reconsider the relationships between the species. Indeed, reflections on how we see ourselves in the other and how we influence one another take on a fundamentally different hue in the context of our four-legged friends. Because the projection of one’s own self onto a dog is far less pronounced, which is why an animal counterpart makes us especially aware of another perspective if we take it seriously as part of the whole and remain open to its perspective. The artists’ own identities as humans might then recede into the background as the various movement forms and human and animal environments enter into contact, without fusing into one. It is precisely this theoretical and cross-species socio-philosophical background, which makes Barbara Berti’s work exciting. And we should keep our eyes and ears open for more, hopefully Donna Haraway infused, thoughts and works from the artist.

“DOGOD. The Situation” by Barbara Berti was performed as part of a double bill on 7 August 20210 together with Areli Moran’s “La postal de nuestra existencia” (on tanzschreiber: https://tanzschreiber.de/en/long-black-hair/, Inky Lee, 17 January 2020) at Lake Studios Berlin, bringing an end to this year’s SUBMERGE Festival.