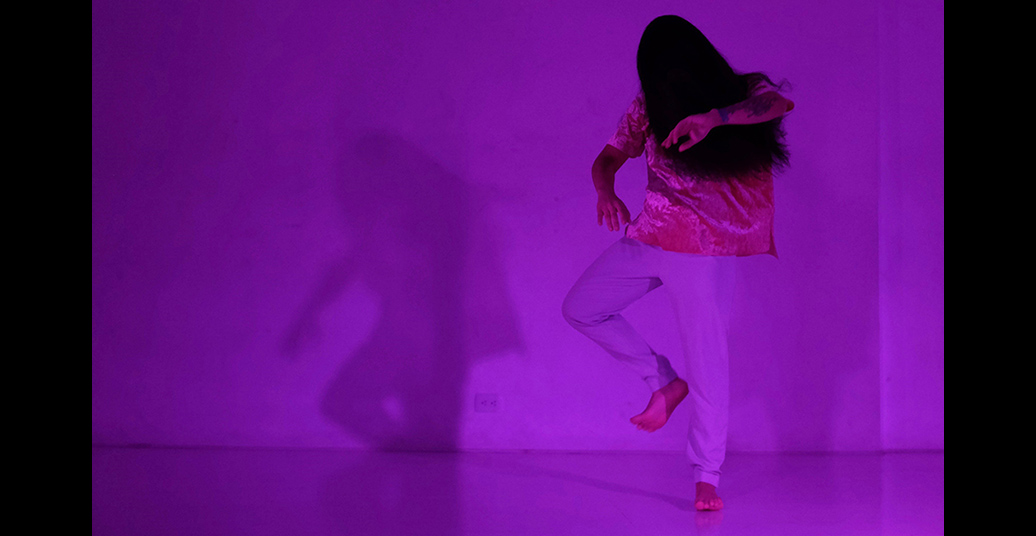 “La Postal de nuestra Existencia” premiered at the Sophiensæle on 16 January 2020 within the frame of Tanztage Berlin.*

The image of long black hair, flowing down like a waterfall in front of a hidden face, reminds me of a horror story from my childhood in South Korea: There once was a boy who was always alone. He never spent any time with friends, instead, he preferred to be alone at home, which worried everyone around him. In his house, hung a painting of a black waterfall. He finally explained one day: “I am not alone,” he said. “I have my black waterfall.” It turned out that the painting was not a painting at all, but rather a ghost. And the black waterfall was not a waterfall, but rather a ghostly woman with her long black hair draped in front of her face. This story used to scare me immensely as a child who always had to spent long days alone in a small empty house.

In fact, all the childhood ghosts that used to scare me seemed to be a woman with long black hair and wearing traditional white Korean so-bok mourning gowns. I also found myself remembering Japanese horror movie franchise featuring a ghost with this exact appearance. Composed of three parts — “Ring 1”, “Ring 2”, and “Ring 3” — the series was a big commercial hit. I remember trying to watch them with friends, although I was terrified. In “Ring 1”, a ghost crawls out of a well. Her face was, of course, covered with long black hair. “Ring 2” had the same ghost crawling out of a television. As for “Ring 3”, I either must have refused to watch it, or else erased all details of it from my memory. A quick internet search would inform me of these lost details, but, to be frank, I would not like to look at the images of these ghosts ever again. I am afraid they would just give me nightmares. When I was little, it was ‘a well-known fact’ that in every empty corner, ghosts of this kind stood quietly, staring. I always felt watched by these invisible creatures.

I am not as scared of these phantoms anymore. I guess I had a more expansive imagination as a child — as most children do. I guess the disappearance of fear is part of the process of ageing. Or perhaps the childish version of me was prone to fill the loneliness with unfiltered — and therefore more intense — emotions. As I grew up, I gradually learned to fill that loneliness with other things.

About seven or so years ago, when I interviewed an artist who has now become a close friend of mine, she spoke about ageing. The only thing I remember her saying on the topic was that the older she got, the more hair her body produced, which made her feel insecure. She has black hair. The artist, Areli Moran, who authored tonight’s performance, does too. And so do I. Ageing makes me fear different things. I believe I still have a vivid imagination, but the things that frighten me have changed.

So far, my outlook on ageing has been a fairly positive one. Once, when I found some white hair in my shower, my initial response was: “Whose white hair could this be?!” Then quickly, I told myself: “It must be mine, because I live alone!” When I told this to a friend, he could not stop laughing. I still don’t understand why it was so funny. I am slowly growing some white hair and I think it is grand. I have always found the strands of grey hair growing from Susan Sontag’s head sexy. In South Korea, there was once a huge trend where everyone seemed to be bleaching their hair grey. My aunt did it. It cost her a fortune and it did not turn out so well. But she said that she had to do it, just to get the desire out of her system. She is wise.

Moran looks youthful and has many tattoos. She has long black hair. When she displays her pubic hair under her skin-coloured panties, a snippet of Nina Simone’s “Black is the Colour of my True Love’s Hair” is playing. I find it to be such a poignant song, but Simone sung it in a different context. I believe that she uses the tenderness of the song to address Black Rights. I interpret the black of her lover’s hair as a metaphor for black people. My personal assumption may be incorrect, since the song itself has a Scottish origin. Moran, however, uses it in a literal way, along with other snippets of love songs about black hair, as she presents the black hair growing from different parts of her body. Let us also delight in being literal for a moment: Shall we talk about pubic hair?

I find pubic hair charming, comforting even. A mature forest, a promise of depth. A couple of days ago, I was walking down a busy street with a friend when she began speaking loudly about her pubic hair. She also has black hair. She said that any kind of underwear is uncomfortable with pubic hair (I suggested that she take her underwear off if she is not menstruating. She replied that she was ovulating, which is “worse”). She told me she gets ‘full wax’ twice a year. She does not appreciate her pubic hair. I simply made some meaningless sounds at the appropriate moments to signal that I was listening.

A different conversation I had with another friend passes through my mind. He told me how in gay sex culture, it’s the colour of the pubic hair that’s ‘the thing.’ His pubic hair is ginger, he said. And, when people are attracted to him purely because of this fact, it empowers him. I guess hair is encouraged on ‘male’ and not on ‘female.’ I guess that hair is often an acceptable toy for girls to play with, while a penis is a valid toy for boys.

Body hair on ‘female’ in my country, South Korea, is completely unacceptable. Luckily, I have very little body hair, although I have a superabundant amount of it on my head. People tell me this is a big privilege. Many lovers have assigned my thick, bountiful hair to my being Asian. And also, for that matter, my scarce body hair, they said, is because I am Asian. I would like to declare, out loud, right now, at this moment, that these assertions are completely false. I know many Asian women who have lots of hair all over their bodies, and others who have negligible amounts on their scalps.

It is probably clear to you that I could go on talking about hair indefinitely, but I will stop now. If, however, you would like to talk about this topic with me further, you can write me. In the subject heading of your email, please note both your natural hair colour and the hair colour you most desire — for example: Black / Black.