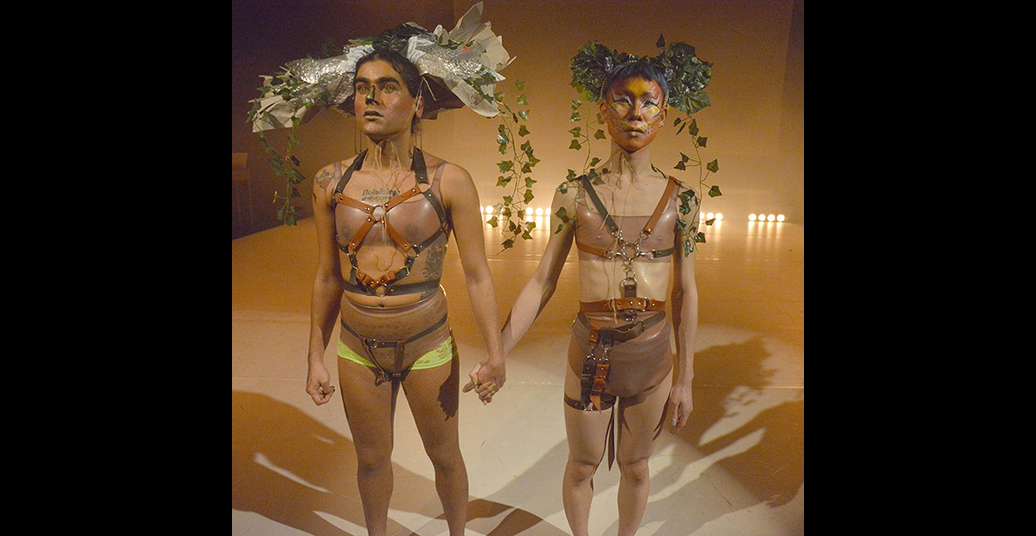 In their latest show “Endangered Species”, performed at Sophiensæle as part of Tanztage Berlin 2020, drag house for QTBIPoC House Of Living Colors explore how not only text, but also dance can be instrumentalised as political satire.

We live in a time when society at large appears to be failing. Politicians present shortcomings rather than solutions while political structures are overwhelmed by ever more urgent societal issues, or aren’t functioning at all. This turmoil on the world’s stage, however, makes for juicy material for theatre directors and comedians, who turn to political satire to address our current affairs. Within the hybrid contemporary dance landscape, choreographers, too, are increasingly producing shows that carry a political undertone. Dance, unlike theatre, does not have a longstanding tradition in political satire, and so an interesting question emerges: How does satire operate in dance?

Satire functions through mimicry, irony and exaggeration. By emulating a phenomenon, a new perspective upon it unfolds. Much can be emulated in movement, but as many an improvisation teacher would confirm, it is easier to interpret the word ‘water’ through dance, than it is the word ‘bureaucracy’. Similarly, it is not hard to imagine that an audience would have less trouble being able to identify the first set of movement material than the second. Text lends itself as a better medium for satire, as it is through language that we can conduct thought experiments, tell complex stories or pinpoint specific phenomena. Text is able to address obscure and abstract topics, precisely because it can communicate exactly, through words, what we are talking about.

Yet, in George Orwell’s seminal novel “Animal Farm”, the word ‘bureaucracy’ does not appear even once. The story is clearly satirical, but never falls into the trap of explicitly revealing what it is referring to. If you were to hand a copy of “Animal Farm” to an extraterrestrial that had no prior knowledge of the novel’s historical context, would they still ‘get it’? Would they miss the fact that it cleverly undermines a corrupt and oppressive regime, and instead think that it’s a rather simplistic and unhappy story about farm animals and their neighbours?

During their piece “Endangered Species”, the House Of Living Colors’ characterful performers transition seamlessly between monologues lamenting the world’s deep-seated issues and state-of-affairs, and multi-sensory, trance-like choreographies. Extravagantly dressed as tiger-elf hybrids and wearing cat-eye contact lenses, they fuse a deep-rooted attachment with nature with modern understandings of evolution, and declare the human race – which they liken to an ‘endangered species’ – in a state of emergency.

The choreography was composed from obvious choices, with the dancers often resembling a pack of wolves or tigers hunting their prey. They turned to the adoption of stereotypes, just as Orwell did with his characters in “Animal Farm”: he used stereotyping as a device to draw attention to the absurdity of the overarching system. And so I wonder: was the stereotypical creation of ‘the animal’ by the House Of Living Colors, a means to achieve something else? Were they using our pre-conditioned assumptions of animals and nature, themselves rooted in a white-Western, colonial history, to play tricks on us?

It is not a show that made me feel comfortable. Sometimes the music was so loud it hurt my ears. Every scene was so over the top and charged with emotion, that it was hard to believe the performers could sustain that level of intensity without losing direction. And yet, they strutted, vogued and jived with such ferocity throughout. What was ‘put on’ and what was genuine, what was serious and what was a joke, was difficult to dissect: were they performing the fact they were performing? They certainly had me on the edge of my seat – right where, I suspect, they wanted me to be.

House of Living Colors is an open drag and performance collective particularly for queer and trans black and people of color (QTBIPoC) that was created after several experiences of exclusion from the mainstream queer community.