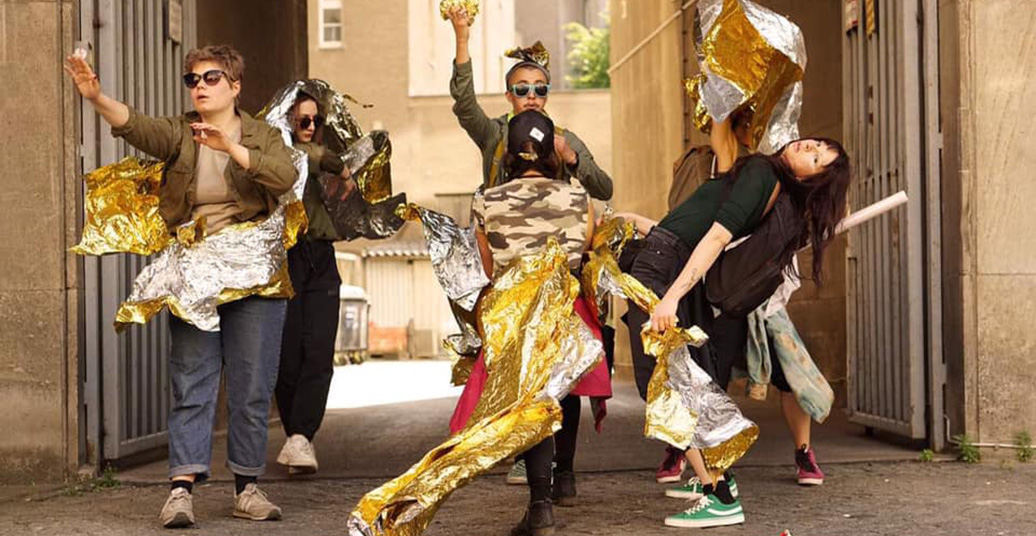 Entering K77 Studio for the “AMALGAM SoloFest”, as part of PAF festival, is like stepping into a whirlwind. Bodies are scattered across the space, some sitting, others standing, some group together facing in the same direction, others split off independently to tend to organisational matters. With no clear stage area, the audience has no choice other than to be just as active as the members of the collective. Each solo requires us to rearrange our stools, in order to reset, reposition and reorganise the conditions for action. It seems we are all performers in this haphazard reshuffling of focus.

Emerging from this disarray is a series of solos. A middle-aged man in a red shirt dances a feisty dance with a ladder, accompanied by music reminiscent of flamenco. A young woman partners with her professional camera, hunched like an animal as she takes pictures of us – are we innocent onlookers or are we voyeurs? A differently-abled female dancer floats her arms and shoulders, wading through air that is sometimes thick, sometimes thin under her fingertips. A highly experienced mover improvises with intricate gestures, cutting sharp angles with her limbs and tapping into fleeting rhythms.

Sometimes the solos are positioned within the space simultaneously, with the links between the players crystallised by the proximity of their bodies. At other times, the performers are seduced into an improvised choreography with the lighting. The lighting designer directs the stage lights at the performers, changing the colours or jiggling them about as he bounces along, shedding not only beams but also tangible energy. The lighting is just as physical as the movement of the dancers, a co-conspirator in the momentary spectacle.

The lighting designer also has another, more significant role: that of emcee. Charismatic, nonchalant, and a smooth talker, he is the red thread between the solos. He is the eye of the storm. Black-clad with a bristly moustache tickling his upper lip, he appears male but his queer body also reveals other traits, which he himself, casually jokes about. He tells us that this is where art is made. He tells us that the artists of Berlin are declaring a state of emergency and are coming together to reinstate the noble and necessary notions of community, solidarity and freedom. Raw, rough and rebellious, this punk attitude is the driving force of the AMALGAM Collective. They move in counterculture fashion against the norms of the mainstream.

Of the many choreographers and companies addressing current issues of gentrification and the pan-European shift to the right, the artists of AMALGAM Collective are facing the turmoil head-on. They address the discussions surrounding the Rummelsburger Bucht and the Alte Münze, and as more and more dance spaces come under fire, they take their performances to the streets. Finding new stages and new audiences along the way, they fiercely ask the question:“Where can we dance?”

At a certain point in the evening, the emcee addresses an audience member directly. “Do you want to dance?” he asks. She nods. A dance by the brave audience member, accompanied by a musician with a DIY gas-mask-style instrument, ensues. Presumably, she woke up this morning without the faintest clue that she would be performing tonight. It is this element of surprise and of openness that allows for the collective to extend their reach: their power lies in using tools that democratise the art-making process and allow them to bleed into a group – a community – that extends beyond the bounds of those whose allegiance they have already claimed.