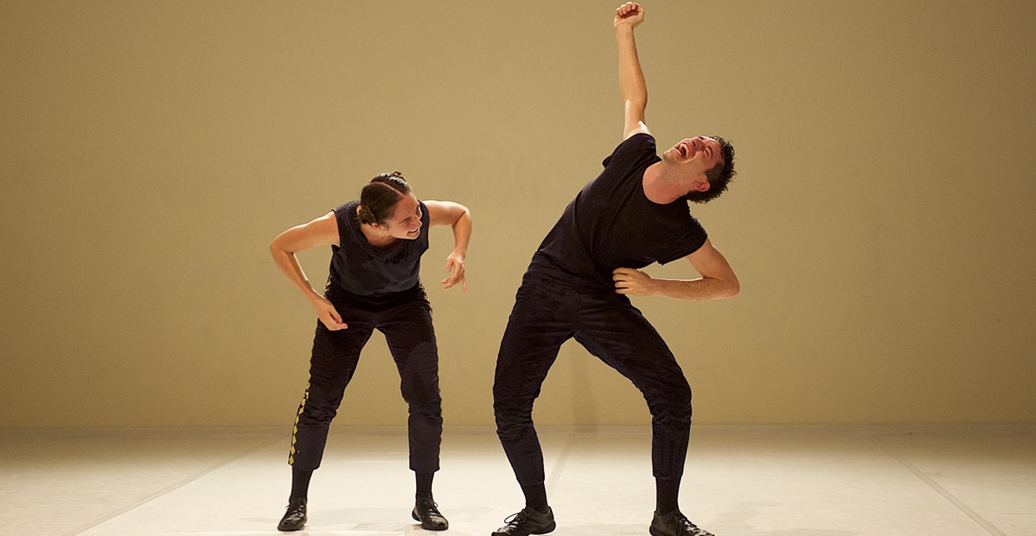 The first time I saw Ginevra Panzetti and Enrico Ticconi was at Tanzfabrik’s Open Spaces in 2016 where they presented their work “Le jardin”. I remember being enthralled by the way in which they combined contemporary idioms and classical forms, while continuously tapping out the rhythm of their dance with their steel-toed slippers. It might not sound like much, but to accompany oneself sonically while sinking into and out of the floor and into and out of another dancer’s arms over the course of one hour is no mean feat. I was impressed.

So when the chance arose to see one of their new creations, a duo entitled “HARLEKING”, my curiosity was piqued. The piece — previously shown at last year’s Open Spaces in Berlin — is part of Radialsystem’s series New Empathies. New Empathies seeks to create a series of concerts, installations, dance works, and events during which an audience might experience “works which approach the possibility of practising the empathetic”.1

“HARLEKING” begins with two creatures huddled up and cackling in an upstage corner. As the light spreads across the stage, Panzetti and Ticconi, dressed in silhouette-cutting black, open their bodies up to us to reveal cartoonish faces and the hyperactive, shrugging gestures of tense, scripted laughter. Augmented and abstracted by a mechanical, clicking track, the two move fiendishly about the stage. Long, dark shadows jump out from behind their bodies giving us glimpses reminiscent of Peter Pan and his shadow in Disney’s 1953 classic.

Through the portal of enveloping bass track, they shift toward a forward-facing stance. From this position, with flowing movements and artful precision, they carry out an extended, exquisite port de bras. Panzetti and Ticconi loop their shoulders, elbows, and wrists like some kind of hooped magic trick or ever-blossoming orchid. Once we are fully hypnotised, they begin to slowly diverge from the constancy of their pattern with one performer stretching time out as the other keeps with the rhythm. One grins and grimaces as their partner remains blank-faced. The variation we are presented with is especially delightful: their emotive and rhythmic de-synchronisations don’t ever really develop into something else — as we are so often taught to expect them to, especially in contemporary dance. Rather, these irregularities stay bubbling under the surface of droning sound and mesmerising, untraceable, looping arms.

In the next part of the work, Panzetti and Ticconi alternately pass the attention between themselves, and then merge with one another. Here, the energy of the performance is somewhat reduced; there is a sense of collaging lots of short sketches together which struggle to find a fluent link. Two final moments come across with strength, however. The first sees Panzetti and Ticconi standing centrally, facing to their right, right arms raised in a flat-palmed Roman salute (later adopted by the fascists), then, their fingers part into Spock’s famous “Live long and prosper” Vulcan salute, then comes the clenched fist of a freedom fighter, first popularised by the communists of the Spanish civil war.2 Here, Panzetti and Ticconi peel powerfully through the iconographies of the body as well as the historical baggage that these gestures — used, reused, and often abused — have gained over time. It’s a powerful sequence and very heavy — so heavy, in fact, that Panzetti has to take Ticconi in her arms, guide him down to the floor, and calmly and slowly snap his neck. He is still. She is still. There’s a curious look in her eyes, not of repentance, sadness, or relief, but rather as though the act hasn’t actually been committed yet. She looks as though she is yet to act, as if she has a great hunger for this act, like a spry cat watching a mouse in stillness. Then, both performers begin to quiver, to shake. His head snaps up, hers down. As their gaze meets, they bounce and shudder erratically, then spring to the floor and—

The small audience isn’t too riotous, but we clap enough for four bows. It gives me time to think. The piece is many things: bizarre, intriguing, graceful, carefully structured, excellently performed, but empathetic I find it not. Indeed, the title seems also to point at as much: “harlequin: (1) A mute character in traditional pantomime, typically masked and dressed in a diamond-patterned costume. (1.1) historical A stock comic character in Italian commedia dell’arte.”3 A note on origin points to, rather fascinatingly, ‘‘Late 16th century: from obsolete French, from earlier Herlequin (or Hellequin), the name of the leader of a legendary troop of demon horsemen.”4 But while demons were indeed somehow very much a part of “HARLEKING”, their presence came not through some expression of darkness transmitted and received empathetically between performer and spectator, but rather from our observation of shifting realities — the superficiality, insincerity, and the uncanny with which we were confronted. With hyperreal laughter, hyperbolic arm movements, fake death, and breaks with reality, the piece was suggestive of a replay of our political news reels, or some type of historically reversed, early modern rendering of Ryan Trecartin. What I have seen does not make me empathise. If anything, I have been stunned — a cold, detached sensation — by the way in which Panzetti and Ticconi have shown me the way masks of emotion, opinion, and politics can slip in such rapid succession over our human selves.

“HARLEKING” is beautiful, strange, and enjoyable, but it is also an act of distancing. Through Panzetti and Ticconi’s thoughtful representation and manipulation of form, sound, and movement, I have not been on a connecting journey, nor have I become more intimate, understanding, or empathetic with something. Instead, like I would be after receiving a little electric shock from a captivating gadget, I am simultaneously fascinated and on guard. The harlequin — transfigured to our own time as members of politics and entertainment (the line continues to blur) — was always there as a device of entertainment and distraction, but it is also one that can be debilitated by excess, overwhelmed by petty diversions, or made hesitant by false promises. In “HARLEKING” we can read as much about history, repetition, and differentiation, as well as psychology and culture, as we can about empathy — if not a great deal more.