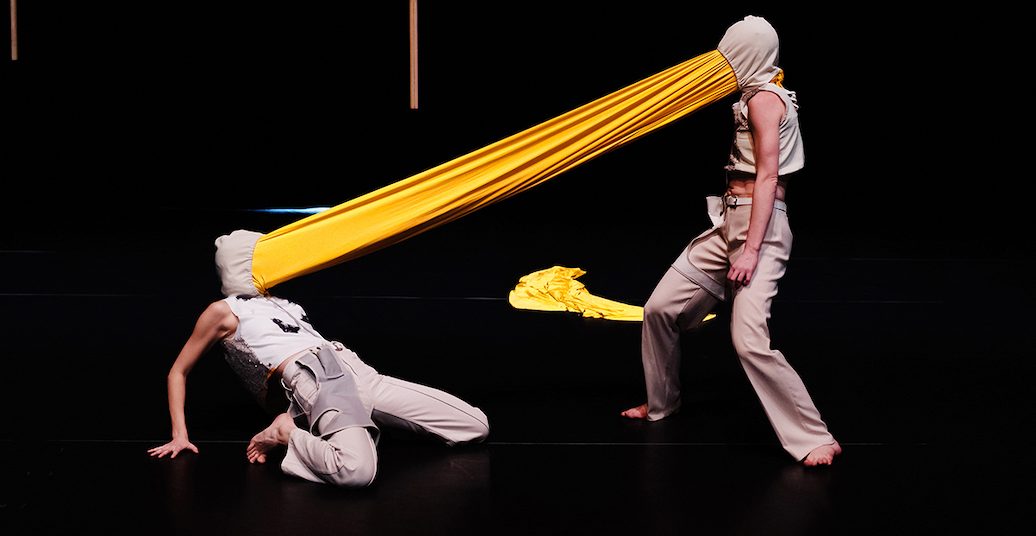 In the performance “Silkworms” (Radialsystem, seen on 3 December 2021) choreographers and dancers Renae Shadler and Mirjam Sögner interweave choreography with poignant visuals in order to highlight the skin as a sensual vessel. Through persistent attention to tactile feedback, they generate a choreographic structure that is able to channel the creation and dismantling of imaginative landscapes and which is marked by the outcomes of a process of sensorial research and movement production.

When I was a child, my grandfather told me how his family bred silkworms in the countryside. Far from being a luxury pursuit, the silkworms represented the possibility of survival. Thanks to the income they made from the worms, they were able to pay the rent for their farmland. In spite of this, I remember more from his stories than just the economic aspects of the practice. I also remember the fantastical elements — the magic of the worms weaving their cocoons, the waiting as the worms transformed, the mulberry leaves.

“Silkworms” starts in a small, intimate space separated out from the main stage. Inside this black box, a large white textile hangs from the ceiling over a couple of small black tables. Shadler and Sögner are seated on the floor soaking some pieces of fabric in yellow dye. A few moments later they take the fabric pieces from the dye and weave them together, placing the result on one of the black tables. The interwoven textile looks like a saleable piece of art. The performers then take down the white hanging textile. They fold it, knot it, and carry it with them to the stage. The audience follow and we are invited to take our seats. On the main stage, Shadler and Sögner hang their fabric sculpture in the back left-hand corner. In the other corner, I see a set of wooden poles lying on the floor.

The first thing I notice once we have moved from one space to another is the how the nature of the relationship between the performers has changed. In the little black room, they were close together but now, even though they are in perfect time with one another, they seem distant and detached. They begin to walk over some yellow textiles which are positioned on the stage as though they are gliding across ice. As they move, they modify the intensity of their movements. The light in the room increases and becomes warmer in contrast to the previous sense of coldness. The interweaving of the performers’ forearms forms a powerful gesture. Through this gesture and the following movement sequence, Shadler and Sögner connect their centres of gravity and shift them in the space. They then create a triangular form like a sculpture through the union of their bodies. To me, this action seems to recall the textile artwork they created together at the beginning of the piece.

Shadler and Sögner turn to the long wooden poles lying in the corner of the stage and begin interacting with them. The ensuing movement sequence is based around lifting the poles from the ground and assembling them in ways that recall elements of weaving. It is as though they are going beyond the physical constraints of the straight poles and somehow creating a web. They then appear to enact a kind of meditation in movement, caressing the ground. The intensity of their movements increases until it culminates in the destruction of the wooden structure to create, along with the previously used yellow textiles, two flags.

The music becomes louder. As they walk around the space holding the flags, the performers make eye contact with the audience for the first time. The visual focus changes, as though they have discovered that there is an outside world again. Shadler and Sögner hang the flags from cables attached to the ceiling in the centre of the stage and then set them swinging. They unpack the textile sculpture and, covering their mouths with a piece of it, create a tube of fabric between them. Once they have transfigured themselves into a kind of two-headed worm, they dance energetically. It is such a compelling moment! A vibrant light emerges from the back of the stage. The performers seem to be called by it and exit the stage through the back door towards an illuminated silver screen, hung on the outside of the building. The audience are invited to follow them.

From the very beginning of the piece, I feel I am experiencing a performance in which two individual creative personalities — namely, Shadler and Sögner — merge in order to develop a choreographic narrative where the gaze and the physical presence of the audience become a synergetic component of the performance. In this dance work I find that the element of transformation is so aptly intertwined with the materiality used in the work and the manner in which materials mutate into one other. In the programme notes it is written: ‘We are interested in the cocoon itself and how this specific space facilitates transformation.’ In the moment Shadler and Sögner cover their faces with the textile, they also transform their identities and create a new fantastic imaginative reality in response to that which we are all experiencing globally. Another element that strongly emerges from the work for me is the sense of touch and the multilayered amplified cognition it brings with it. “Silkworms” seems to be a work that is intended not only as a metaphor, but also as a choreographic mechanism through which tactile attention to texture — wood, skin, fabric — changes and transforms constantly through contact.

“Silkworms” by Renae Shadler and Mirjam Sögner premiered at Radialsystem from 3 to 5 December 2021.