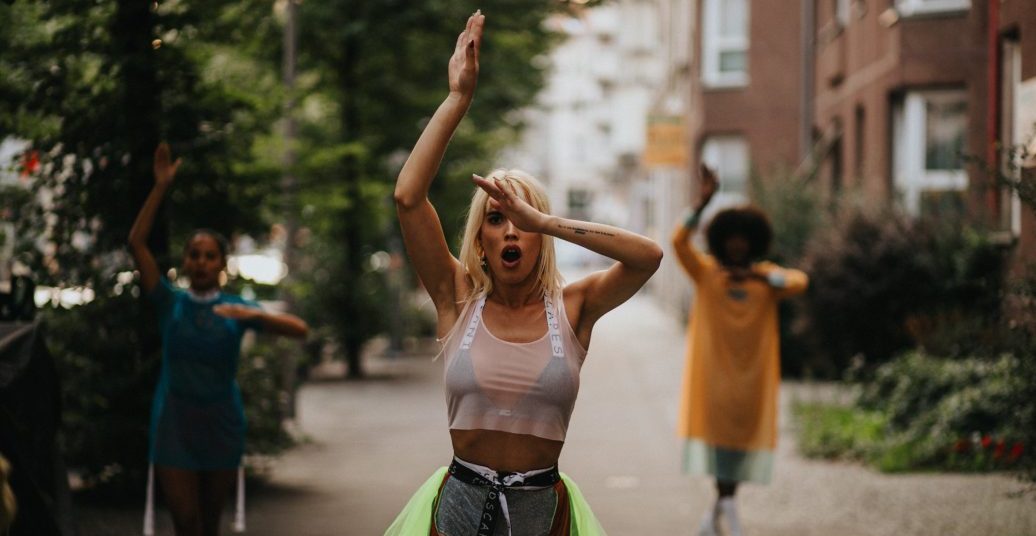 On September 11, 2020, Pêdra Costa* went to see “Inverted Landscapes”, a performance directed by André e. Teodósio (Teatro Praga) from Lisbon, which began inside with an exhibition by Teodósio and Bruno Bogarim, and was then taken out onto the streets. It was presented at the gallery Kunstraum Botschaft – Camões Berlim, by the performers Ana Tang, Aurora Pinho and Paulo Pascoal.

Added note on 27 Nov 2020 by Pêdra Costa: Dears in Lisbon, especially Rodrigo Ribeiro Saturnino (@rod_lx), I made a mistake. I am so sorry. I will not deny my accountability in the case of racism and anti-blackness in the art scene in Lisbon. I wrote this text about a performance in which the director, André e. Teodósio, was involved in an incident of racist violence and censorship which occurred in Lisbon, October 2020. An activist engaged in anti-racist solidarity called me out and informed me about the situation. I didn’t realise that I was writing about a performance directed by one of the people who was involved in this incident of racism.

To understand what happened, go to these links, where you will find the video and the collective letter “Portuguese art is racist”: https://youtu.be/Q9lNyqzo_4o (with English subtitles), https://afrontosas.medium.com/a-arte-portuguesa-%C3%A9-racista-2388d9d1eb2 (in English and Portuguese).

Do I sound better since you cut my throat?

What do you mean by elegant?

Who’s dancing in the grave?

Where did you hide our stolen lives?

And in the future, I still go out every day wondering how much suffering I’m able to hold.

I bargain pain as I step outside.1

I was invited to the performance by my friend Cardo Matos, and when I got there, I met more friends from Portugal who are also based in Berlin. They already knew who Teatro Praga were. When I arrived, I also saw Grada Kilomba, my former professor2. What a meeting!

Before watching “Inverted Landscapes”, I had never heard of Ruth Aswin and Valentim de Barros. The artwork is based on the life of these two artists who both travelled across the world in search of the same artistic goal. Ruth Aswin, a German, came to dance in Portugal in the 1930s, and her student, Valentim de Barros, fled to Berlin in search of work and freedom, as can be read in the description of the performance.

Madame Ruth (1897-1988) travelled from Berlin to Lisbon where she taught classical dance. At the age of 16, Valentim de Barros became Ruth’s student. At 20, he fled to Spain.

We seek spaces for singularities.

The social shall not precede the individual.

The plural of poison is people.

I put down routes, we break old names.3

After seeing the exhibition, we moved outside. The three performers began by collecting almost all the objects in the exhibition and then leaving the space. On the sidewalk outside the Portuguese Embassy, Paulo started talking, dancing, and walking around us. He looked us in the eyes. There was no fourth wall.4

Then Aurora ordered us to follow her, and we paraded towards the Jugendpark der WBM. Aurora stopped and began to dance a broken dance, creating angular drawings with her body. My knowledge linked her dance to the Ballroom5 scene. She spoke in a broken way, and her voice reminded me of a faulty robot. Or was her body translating an impossible dance, inaudible speech, an unrecognised expression, an erased story?

The three performers were talking to each other, creating a reverberation of words as we crossed the street, and they led us to the park. On the nearby avenue, the sirens of the police cars were ringing out loud, mixing with their lines, and disturbing the whole urban scene. In the park, among the trees, Ana started her dance, twerking sometimes, and facing us with her body. Her words were spoken with a sharpened tongue and accompanied by a challenging gaze that went deep into our minds. Suddenly, she shouted out Corona Virus!, using Cardi B as a meme reference.6 The name of the performance was incorporated into their costumes, written on strips hanging from the performers’ bodies. They knew many stories. Their bodies inverted landscapes. Because of that, they were here in front of us.

Performing in the streets is for those who already know how to negotiate at the crossroads7, for those who are between worlds. It is for those who understand that their bodies are operating under the effect of necropolitical fetishisation and yet still they go through it all anyway, transforming themselves and society. They are bodies that do not ask for permission. Thus, a performance in an urban area becomes a confrontation — a real one, in contrast to how it would be if it were presented in an art space. In the streets, there is no contract, no voluntary suspension of disbelief.8 It is raw life. It is an action that reaches people in the city, without first inviting them in. And there is no protection.

We’ve been wearing this world like a scar for a long time.

We have learned to trade pain with spaces.

We destroy history and sell debt.9

Valentim de Barros was held in a psychiatric hospital between 1939 and 1986, and lived as a prisoner until he died. The diagnosis: homosexuality. The first Portuguese dancer to perform outside the country was never recognised as an artist, nor as a trans person.10 Lisbon, January 21, 1949: Valentim entered a woman’s bathroom as a “transvestite” where a cis woman went mad because he “was a man”. The dancer beat her up. Portugal was under the dictatorship of Salazar at the time.

During this time of restrictions, collective responsibilities, and individual learning, are the performing arts still important? Will performances take to the streets? What are the risks involved in performing in public spaces? Will performing arts be considered art if they are performed outside of art spaces? Who is art for? What should be expected of the city when a performance invades it? What are the spaces and time, material and immaterial, that are in contention? What powers are activated to protect ‘public’ spaces? Can “only art save us”?

Perhaps one of the immediate responses to these questions is supplied by what happened at the rehearsal the day before the premiere, as reported by director André e. Teodósio to his social network: “(…) while we were performing on the streets (…) we were expelled from the street by a security men from @axelspringer_se. Stating that the street was theirs, the leftovers of the Berlin Wall was theirs, the road was theirs (…) we had to leave all sites nearby.”

Or as in the case of Mujeres Creando (La Paz-Bolivia) at the political and artistic event Fest des Lachens: Wer lacht(e) wann über wen? in Linz-Austria in 2012 held by maiz Kultur, an autonomous centre made by and for migrant women. The Mujeres Creando’s urban intervention was to create a work of graffiti (with washable ink) by writing sentences on the ground all over the public square in front of the Ars Electronica Center. A tall, white, cis man came out of this space of art speaking German and giving orders (!) to the artists to stop doing “that”. The lawyer representing Mujeres Creando showed the official permission letter from the city to carry out the intervention. But the man was blinded. He called the police. When the police confirmed that they did indeed have permission, only then would he listen. The police, to “calm everybody down”, claimed that the man probably did not understand the German spoken by the artists and organisers. So, another discussion began … I was there, I saw it all.

The traffic is calm, that’s what you wanted.

To exclude from hierarchies of knowledge.

On 2 January 1939, Valentim arrived in Portugal and was arrested by the police. The indictment in the court proceedings read that he was: Expelled from Germany for using a false identity. After spending three months in prison, Valentim was taken to a hospital known as the Sanatorium Bombarda. The doctor who carried out his psychiatric examination wrote: “He greets me at the entrance, sits down when I order it. Feminine, mellifluous and clingy modes, denouncing his sexual inversion. Perfectly calm, natural humour. Adapted, long and circumstantial answers, effeminate voice.” The diagnosis: ‘Homosexual psychopathy and passive pederasty’. At the time, Valentim was 22 years old. He was, in years to come, subjected to a lobotomy and electroshock treatment.

My head is full of stuff!

Since you’ve isolated me.

I do not read sliced stars,

I do not poach eagle eyes.

I draw angles, repair the denial.12

How do you dance under an authoritarian regime? How do you dance when you are considered sick? At the end of it all, “Inverted Landscapes” shows me, once again, how much we have failed.