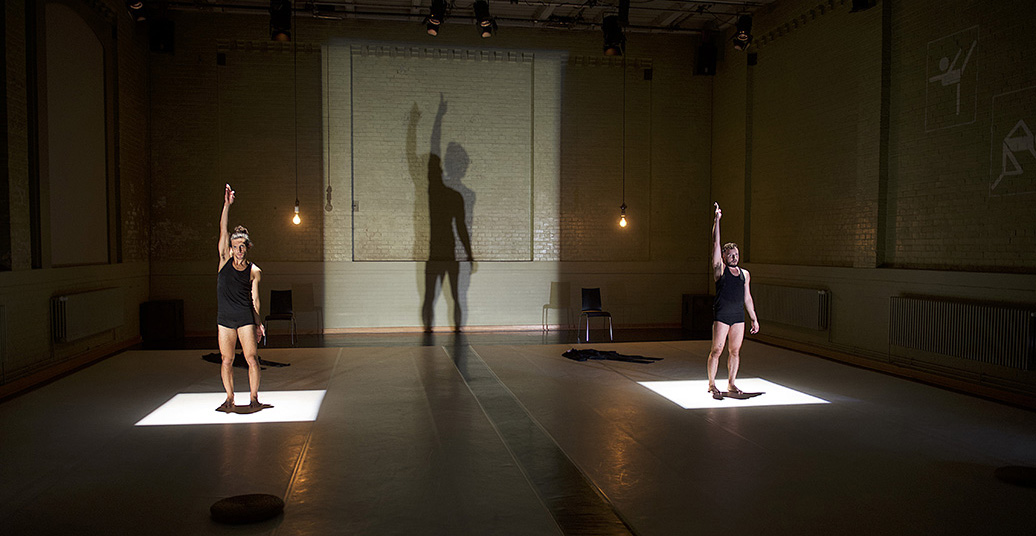 We’re welcomed by Toula Limnaios, choreographer and one of the original dancers of “isson”, who reflects briefly on the insecurities of the second lockdown and an unknown future. “But,” she says, “today, we’re in the present. We trust it. We trust in making a better future.”

The stage is divided in two by twin white rectangles of dance floor. In the centre of each rectangle close to the wall, a chair is placed with a light bulb hanging from the ceiling above. Behind each chair, we see a person, facing the wall. The one on the left is slim, with dark hair bundled up in a bun, high on his head. The other has short hair and a thick neck. Both are dressed in black suits, their jackets on backwards. They put one hand on their lower backs. Followed by the other hand. They place them tenderly just above the mounds of their buttocks. Each hand grips the opposite elbow, holding it, caressing it. Their movements are precise, executed with care and attentiveness. Now a hand is resting on a thigh, and then quickly peeks out to the right. This small but sharp movement evokes a shot of energy in my body. The dancers turn, each entering his designated half of the space.

Throughout the whole performance, the dancers hold to these detailed and precise movements. The flow and the absolute control, even when taking their jackets off and then putting them back on again, off and on, off and on again, together with the warm light of the bulbs and a soundtrack filled with sounds of glass tinkling and clocks ticking becomes mesmerising. The cameras (there are three of them) sometimes zoom in on one of the dancers or the other, but it’s only when we are given a full view that we see not only the perfect synchronisation of movement, but also the connection between them. They are identical twins in movement. The strength of their interdependence becomes all the more tangible when synchronicity is lost. A light change reveals two smaller rectangles in the bigger ones, and for a moment the dancers are allowed an escape from moving together. But this moment doesn’t actually create the expected freedom. Instead, I feel as though they are lost, left alone without their twin. It’s only a very short intermezzo, but it’s a relief when the bodies coincide again.

The togetherness comes to a high when the dancers’ shadows meet and the two bodies on the floor become instrumental to the single merged shadow on the wall, incorporating all their synchronised movement. They are together apart, but mostly, they are together.

The stream of “isson – a solo for two men” by cie. toula limnaios can be watched until 28 November, 2020 at https://toula.de/en/online-program/live-stream/.