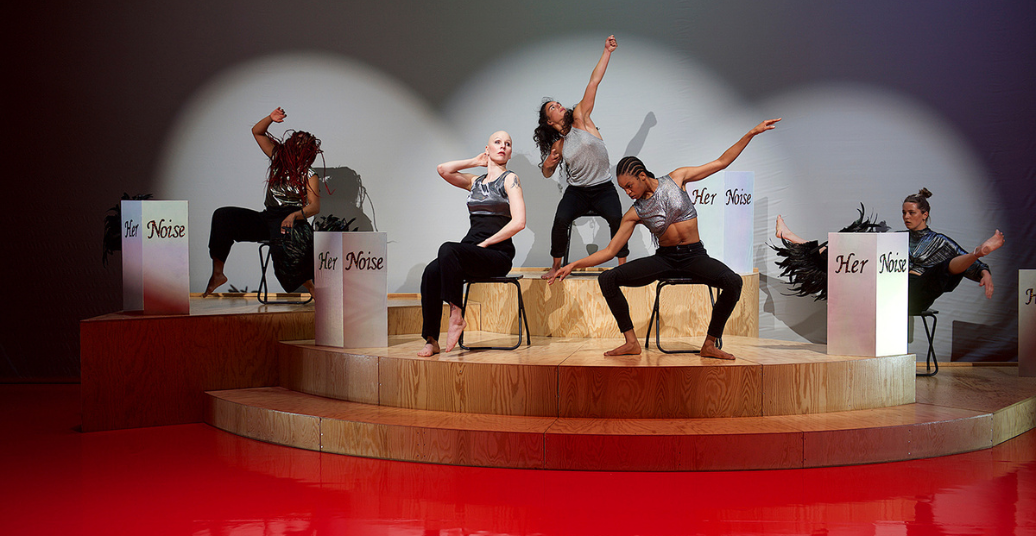 Parvathi Ramanathan writes a letter to a girl on the tram after watching “Her Noise” by the Company Christoph Winkler which premiered on 29 December 2022 at Radialsystem.

Your voice is ringing in my ears. Actually, I only vaguely remember your voice. It’s your words that are ringing in my ears. Actually, I don’t really understand Arabic. It’s how you said your words that is still ringing in my ears. Through your voice, I could hear that you were asserting yourself, fighting, taking a stand and putting your foot down. Whoever you sent that voice note to must have surely got the message. Wah! But I wish you hadn’t let that other passenger at the back shut you down. When he cleared his throat very loudly to shush you, it was strange to see your apologetic smile. It was strange to hear your voice falter and stop. He looked so smug, sipping his beer after making you shut up. I wish you hadn’t gotten so conscious of yourself.

I wonder if you would have acted differently had you watched the performance I was returning from on this very night? It was called “Her Noise”, presented by the Company Christoph Winkler. In this choreographic concert, the five women performer’s voices – come forth unregulated and articulate. They quote and sample from music history and sonically produce political gestures emphasizing the emancipation of female voices.

The performers are loud and proud. Their black headgear is loud and proud. The red floor is loud and proud. Taking a place behind their speaker’s podium, they appear to be ready to make a speech at a press conference. But the formal air is instantly broken with the sounds from the shakers held in their hands. Each rattling shaker echoes a different rhythm – reflecting the unique voice of each woman. In the choice of the flicks and arcs of their wrists, we hear her individual point of view. Soon enough their rattling voices interrupt and overlap with one another. But the interruption doesn’t stop them. Rather it turns into a groovy force – grooviness that is held throughout the performance. “Her Noise” takes on a cool RnB music video vibe with the performers breaking into live song and dance. The performers all talk and sing, or rather they talk-sing of heard statements made about women’s speech and female voices. “Your voice…is hurting my ears”, “You are too loud”, “Your voice is too soft”, “Don’t be a whore!” Later, they create a sound montage of words, barks, grunts, howls, shrieks and laughter. Their scat singing and DJ’ing of sounds, heard all at once as an unabashed cacophony, points at the anomaly in our society – that the sounds themselves are ordinary, but women verbalising them loudly is perceived as disgraceful. Much like your talk-sing spitfire on the tram that night, women are often shushed, asked to be quiet, to alter and to hide their expression.

In her essay ‘The Gender of Sound’, Anne Carson draws a congruous chronicle from ancient Greece to modern day examples of how female sound – its quality as well as its content – is equated with being unbridled, monstrous and disorderly, and is declared unsuitable for civic space. “Her Noise” celebrates these voices. The performing women create a circle of song and an air of incantation – hailing ancestors and earth. One song inspired by Diné (Navajo People) teachings is a moving ode to sacred beauty. Another song in particular still stays with me. “There’s a river of birds in migration – A nation of women with wings”. This choir in movement brings forth voices harmonising and well-composed together. This made me wonder: what if the voices weren’t harmonising? What if they weren’t cool or groovy? Aside from some high-pitched renderings of what would have been called “female hysteria” in another century, the performers kept their composure for the most part. I wish they lost it more. I heard their voices, but not their noise and dissonance. But hey, I also wish I had said something to you in the tram, perhaps some words of encouragement, or maybe added some of my own noise!

“Her Noise” parodies the soft and subservient female voice of service-oriented virtual assistants like Siri, Alexa and Google Maps. The performance highlights technology and aspects of quotidian life that beget female-sounding voices aligned with gendered perceptions of their role. Here, Google Maps’ instructions have the expected pleasant requesting tone, but not without her own glitches. “Your destination is on the fucking right.”

An electronic pulse carries “Her Noise” onwards: pioneering composer and founder of Deep Listening Pauline Oliveros’ ‘Bye Bye Butterfly’ becomes inspiration for the performer’s own personal movement impulses. With this and other odes to the female voice, “Her Noise” comes from a process of shared authorship. Their ring of dance supports and roots for each member who is part of it. They smile at one another, in a celebration of each other and those female voices that came before. Together they hope, in song, to be “free once more”.

Well, maybe you will hear these songs yourself. Maybe you will read this very public letter. I hope you will. And I also hope you will continue to be loud on the tram, on the street, at work, in bed, with your family and friends. I hope you use your voice. Not just for harmonious song, but for cacophonous noise!

Shout out,
From another loud girl who sometimes loses her voice

“Her Noise” by Company Christoph Winkler was shown from 29 to 31 December 2022 at Radialsystem.