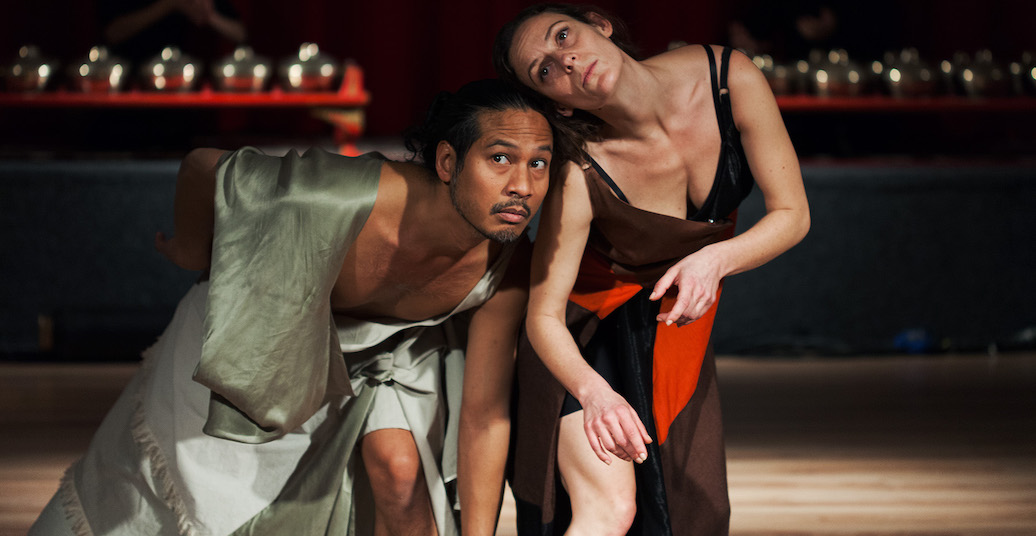 In “AWAL / BEGINNING” created by choreographer Ruben Reniers and collaborators at the Rumah Budaya Indonesia Berlin, an explosion of performative pedagogy blends traditional and contemporary choreography in a phantasmagoric performance event taking place over three days from 16 to 18 December 2022.

There are different types of beginnings. Some emerge slowly and specifically before blooming like a flower. Some explode early, before finding direction within the chaos. It feels at different moments in the new work “AWAL / BEGINNING” that a space has been created where all possible types of beginnings can happen.

Choreographer Ruben Reniers and collaborators have created a ‘total’ piece that is difficult to describe – if only for the fact that it incorporates so many art practices and styles. The movement seems largely inspired by traditional Javanese dance, and yet seems to twist into ballet, and then something contemporary at a moment’s notice. Paper-making by Barbara Steinitz meets gamelan orchestra, led by Bilawa Ade Respati, meets the electronics of Konstantin Heuer, and then twists into something entirely new that seems occasionally inspired by shadow puppetry. At certain points, costume designer Juliane Längin temporarily leaves her role minding the piecemeal, flowing costumes that mix mesh and cloth, joining for some playful formation hand-clapping, while puppet specialist Barbara Steinitz starts to play the bonang. It seems to be a space where anything could begin.

There’s an element of phantasmagoria to the dramaturgical approach (with dramaturgical advice by Monika Radl), where phenomena seem to appear and retreat at random within the multiple rooms of the Rumah Budaya (House of Culture). It creates a carnival-like scatter-gun effect: Spectators can wander around at will, almost get hit by a dancer’s waving hand in the middle of some emphatic gesture, or find themselves trapped in the corridor by a slow-walking Nora Vladiguerov who addresses you only out of the side of an eye. As a spectator, you can hide in a corner and be treated to a one-on-one performance by Reniers, give all your attention to one of the dance video submissions from Indonesian artists that form part of the work, or watch the meditative paper-art creations by Steinitz – which adorns the walls as an installation.

Despite this frenzy of activity, and in contrast to many performances attempting a promenade staging, nothing seems out of place in “AWAL / BEGINNING”. On the contrary, the effect is celebratory and energised. This is complimented by the feeling of pedagogy that pervades the work, which often gives the impression of a close-knit ensemble (based around rubarb dance & art, but incorporating new associates) using the event of presentation to a public as an excuse for performative exchange. This is emphasised by the constant pairing hinting at a leader-follower relationship – in music as well as dance – where, for example Chia-Ying Chiang and Yuya Fujinami in an elongated not-quite-following of each other. The spider-web of power cables around the building are mirrored in the tangle of styles and journeys briefly joined and then left, moments where the pedagogical pathways become briefly visible before giving way to the next transition.

“AWAL / BEGINNING” is a work that never strays from an honest exchange and engagement, and that achieves a sublime anklung-fuelled climax, following a scene reminiscent of The Matrix’s lobby (complete with Rob Zombie backing track), spinning and jumping as someone tries to simultaneously roll out a temporary dance floor. The space is pushed and shoved around, things occur in slow motion and fast forward – and moments begin to gather power and swirl, as dissonance becomes unison, and technique gives way to informality. It’s a triumph of collaboration and resourcefulness from an assembly of artists who seem at the peak of their powers, given the space to breathe and exchange. The result is infectious and marvellous, blending intimacy and precision in a kind of transformative conversation, shared in glimpses over an epic, 2-hour evening.