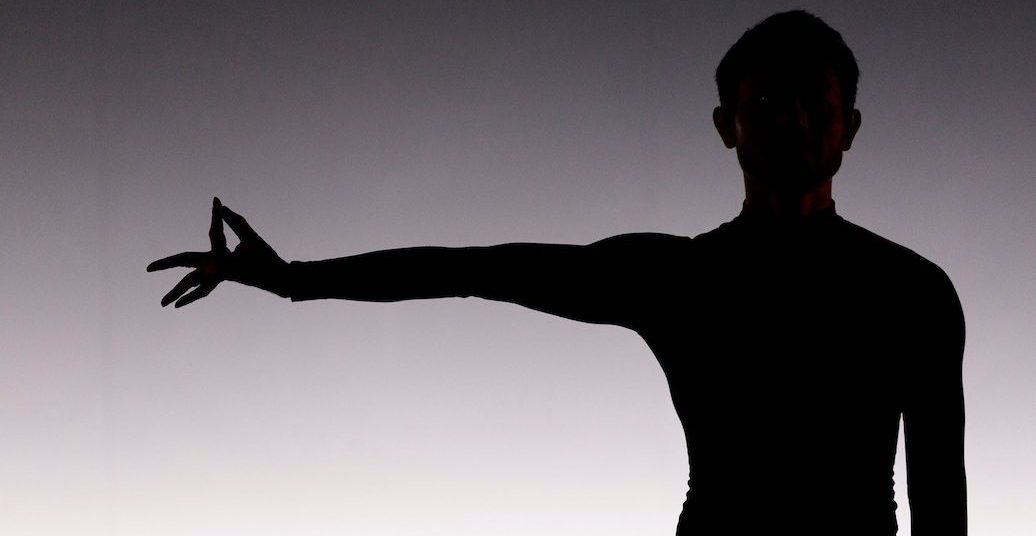 “No. 60”, choreographed by Pichet Klunchun, sensually and systematically moves the edges of Thai Khon dance. By unpacking the traditional form and tapping into instincts from the head, heart, and gut, it democratises it and sets it free for new creative impulses. The work was shown at HAU2 as part of Tanz Im August 2022.

A shimmering sequined fabric forms a roof over the performance floor. It isn’t complete, however. A vast circular hole gapes in the centre, giving the sense of an absent cupola — a dome of authority, now lopped off. It is under this cavity that choreographer Pichet Klunchun, with performer Kornkaran Rungswang, dare to perform “No. 60”, a contemporary utterance aimed at extending the classical Thai Khon dance repertoire.

Khon is bound to the very idea of Thai-ness. It is understood to be a 700-year old system of movements and gestures strung together to narrate the stories of the Ramakian, a Thai version of the Sanskrit epic the Ramayana. Formerly performed exclusively for the king and the royal court, Thailand’s shift to a constitutional monarchy in 1932 continued the process of bringing Khon out of the royal palace and embedding it within a broader national identity. Its transmission remains exclusive, enforcing hierarchy and tradition through several years of training under a teacher. I relate this to my own training in Indian classical dance. At age 11, at the command of my Bharatanatyam teacher, I avoided cutting my hair too short and also ended my then three-year stint in karate training. I was told the martial art made my fingers too stiff. Such is the hold that the beauty, virtuosity, and authority of a form can have on the dancer. Similarly, the reified and codified world within which Khon operates makes any form of innovation, creation, and improvisation a significant milestone. In “‘No. 60” Klunchun engages with Khon, offering a tool to demystify the form while still reaching into a genuinely creative impulse.

The title of the performance comes from Klunchun’s analytical research into the 59 poses of the Thai Theppanom canon. This research enabled him to identify six key principles that he believes constitute the underlying grammar of Khon. Klunchun’s visual notations and notes of the postures are projected onto the rear screen as part of the mise-en-scène of the performance. They identify the dynamic and relational shifting of shapes, weight, energy, and direction in each pose. These drawings and notations tap into the organic logic of a body’s movement without simplifying the mastery the form demands. For example, an active sense of the triangular shape created by the forehead, chest, and lower belly in relation to the knees is what Klunchun recognises as the “soul beauty of the movement”.

We see this richness of Khon live on stage as well. The two performers move synchronously through these postures, showing the shifting points of attention and axes in their bodies. In one pose, they stand with feet turned out and knees bent. One foot is held aloft. The arms are raised on either side and slightly bent at the elbows and bent extraordinarily backwards at the wrists. This fierce curvature continues into every fingertip, each stretched and bent, to form one of the traditional Khon hand gestures. This severe flexibility is contradicted by a softness as the two dancers transition into other poses. Against the brightly-lit background, their bodies appear completely dark, thus highlighting the dynamic relationship of the negative spaces created by the curves and circles of their postures. The complementary relationship of the shapes held by the two bodies next to each other also becomes evident.

“No. 60” also subversively comments on Khon’s historical roots and the role of the royal family in Thailand today. At one moment during the performance, the shimmering roof descends. The stage is engulfed in darkness and the glittering undulating fabric looks dubiously sensuous as it appears to smother the two dancing bodies. But then the performers fetch megaphones and shout out words of protest through them over the electronically synthesised live music by Zai Tang. “No. 60” displays gumption in this evident challenge to the monarchy and the singular narratives that originate within a traditional dance form. In another sign of this subversion, we hear the dancers announce their actions with their own voices, in contrast to the silent performers in traditional Khon who are spoken for by accompanying vocalists sitting side-stage.

Exploring a contemporary approach, particularly with traditional or classical forms, often involves slippery manoeuvres. Movement vocabularies from North American or European contemporary dance are frequently merged into those traditional forms to create a kind of ‘fusion potpourri’ that is then declared contemporary. While this tricky territory offers no right answers, I read in “No. 60” an evocative vein of innovation that nevertheless remains firmly within the world of Khon. In its contemporary approach, “No. 60” acknowledges the labour and pain of the Khon dancing body when the dancers pull up support bands over their knees on stage. And in some moments, Khon’s principles of flow, synchronicity, circles, and curves is explored by the dancers as they let go of the solid grounding of the feet. Instead they attempt to create connection to the floor with their hands. Importantly, Klunchun unabashedly names his work “No. 60” in clear reference to an attempt to extend the limits of the traditional repertoire of 59 poses. He pushes against and disregards the forces that curtail instinct and creativity within Khon, yet somehow still remains fully immersed in the practice of this classical form. The 60th pose of Khon hasn’t yet been found or formalised, however. Klunchun’s research, including the performance “No. 60”, simply propose a framework for an open intuitive act of creation within the form.

After the performance at Tanz im August, I ask Klunchun whether he would feel comfortable to show “No. 60” to his former teacher. After a moment’s thought, he replies that indeed he would. As for me, I decide to contact my Bharatanatyam teacher after twelve long years and perhaps even send her a selfie with my newly-cut short hair.