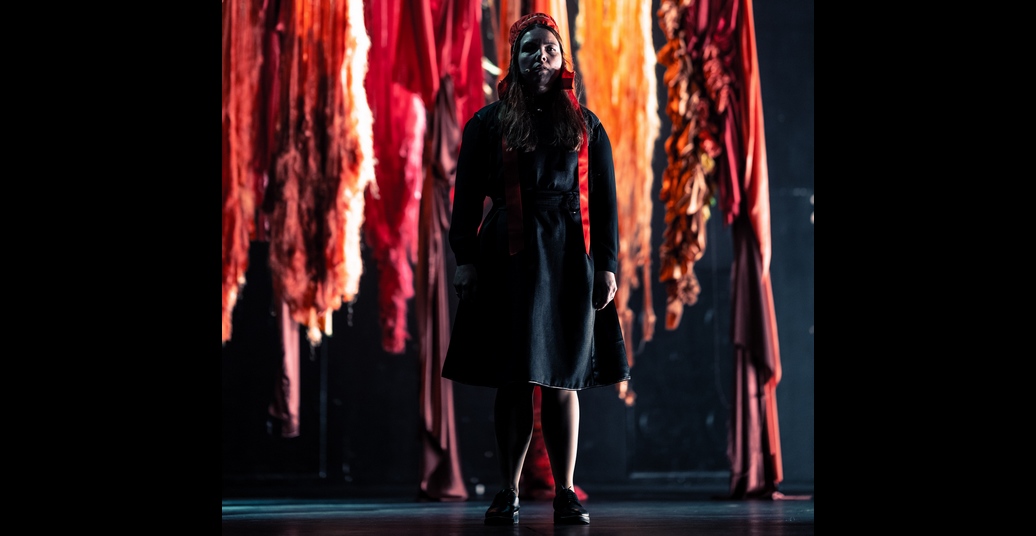 Shown at Tanz Im August 2022, “Vástádus eana – The answer is land” by Elle Sofe Sara powerfully embellishes on the primacy of community and coexistence with nature through the body, voice, and certainly, through a more sustainable way of being.

I write this text on 15 August 2022, the 75th anniversary of the independence of my home country, India. Neighbouring Pakistan, across a border drawn moodily by a British viceroy, celebrated the same occasion one day earlier. Here in Berlin, far away from both these lands, I ponder the fluttering in my heart. No loudspeakers are erected here on roadsides, blaring popular songs about freedom and pride in the nation. Instead, I watch from a distance, alone, feeling those habitual traces of gratitude at being born in a sovereign India, and also my agony at its ongoing right-wing authoritarian turn. I reminisce about that dying dream of a secular democratic republic. When chest-thumping religious fundamentalism and jingoism become the barometer for patriotism in India, as in many parts of the world, I seek instead the language to express love for … well, for that piece of land, I suppose.

Land is the question, the answer is land

Land. Land and the soil and water that mark it. Land and the sky that shades it. Choreographed by Elle Sofe Sara and performed by its cast of Sámi performers, “Vástádus eana – The answer is land” leans into a deep bond with nature’s elements, expressing something passionately patriotic, yet uninhabitable by the barricades of the nation-state.

The artists who contribute to “Vástádus eana – The answer is land” trace their roots to Sápmi, which stretches from central Norway and Sweden, across northern Finland, and into north-eastern Russia. The indigenous Sámi people have been subject to racism, displacement, political oppression, and cultural erasure since at least the 17th century. Each of the four countries Sápmi extends across acknowledges this brutal history to different degrees, though often without uprooting the continuing systemic inequality. Among the Sámi themselves, however, it appears that a cultural memory and, dare I say it, a spiritual ethos, prevails — one that is rooted in a relationship with the natural landscape. Sara incorporates this cultural memory, political will, and ecological relationship into the performance.

Aspects of embodied Sámi traditional cultural practices frame the sonic and visual elements of the work. Sara’s creation has the audience swimming through a polyphonic channel of sound created through joik, a traditional form of Sámi singing. In the tall chambers of HAU 1 in Berlin, we are gently braised in simmering voices for about an hour. Seven bodies sing different notes, one picking up from another, harmonising, digressing, then joining the tide again until there is a proclaiming melodic cry that discovers another current in the flow of water.

Later, during a Q&A session, I ask Sara if there is something in the landscape of Sápmi that alters how they sing joik. Her answer suggests that joik is more than singing a dedication or ode. The word demands another translation that implies existence, yet which is distinct from ‘to be’. Joik resonates a direct physical connection between the human body and nature. Her reply: “When we joik the land, we joik it, rather than joik about it. We are joik-ing ‘mountain’, not to the mountain”. It is this grounded oneness that we experience in “Vástádus eana – The answer is land” as the performers joik their joik, some from the archives, others newly composed by Frode Fjellheim.

This retrieval from archives – including learning from the living archives of the knowledge of community elders – cements “Vástádus eana – The answer is land” firmly within the Sámi community it emerges from. At the Bibliothek im August, where performing artists share books that are important to their works and ways of thinking, Sara places ‘The Ládjogahpir: the Foremothers’ Hat of Pride’. After a brief perusal of the book, I gather that Sara’s work immerses itself in a collective effort to retrieve the Sámi community’s stories. Ládjogahpir – traditional Sami women’s hats – are worn by the performers in “Vástádus eana – The answer is land”. These red-coloured crown-like hats made with woven fabric and with wooden frames within were once forbidden by Christian missionaries as was the singing of joik, both being declared a sin. Along with retrieving suppressed cultural expression, the choreography also manifests its spirit of activism in the coordinated stamps, raised fists, and the symbolic megaphone that each performer holds aloft.

The processes of retrieving, remembering, and acknowledging, however, don’t always appear to be easy. Ties to any land, but particularly one that is changing fast under the effects of climate change, can cause unspeakable duress. On stage too, I read tension in the fabric of the group as one performer cleaves away from the rest. Her body contorts in unrest. She mouths a silent shriek as the others continue to joik. The other bodies move to support her, allowing her to lean on them. They form a bridge to help her cross. The joik changes, providing solace through soothing whispers, but the joik continues.

The title of the performance – also sung as joik – comes from another Sámi artwork ‘Kiss from the Border’ by artists Jenni Laiti, Niillas Holmberg, and Outi Piesku. By suspending eight lines of poetry along the Deatnu river valley, the upper course of which demarcates the border between Finland and Norway, the work makes a political call for imagining sustainable co-existence with the natural landscape, beyond the pettiness of national borders. This week, as thousands of fish washed up dead on the Oder river along the German-Polish border and any progress in the matter appears to be ruled out by poor communication between the nations involved, I am inspired by the wisdom that many indigenous communities choose to practice. The knowledge that indigenous communities hold for more sustainable ways of life is not meant to remain at the fringe, or be lost along borders. What would happen if this knowledge could perhaps percolate through all aspects of education, health, political organisation, art, and even the ways we move around the world?

Asking for permission with humbleness

Asking this place permission to be here

Giving a promise to this place and land

To leave it as I found it

I notice this approach to interacting with nature – through humility, reciprocity and respect – from the very beginning of “Vástádus eana – The answer is land”. The performers lead the audience to an open space behind the auditorium of HAU 1. Under the open sky, in the shadow of a linden tree, they ask this place, which happens to be Berlin, permission to be here for a while. They introduce themselves to this land with a clarion joik, which is, at once, gentle and powerful.

The phrases of poetry quoted in this article are from joik lyrics that are part of the performance “Vástádus eana – The answer is land”. The original text is in Sámi translated to English.