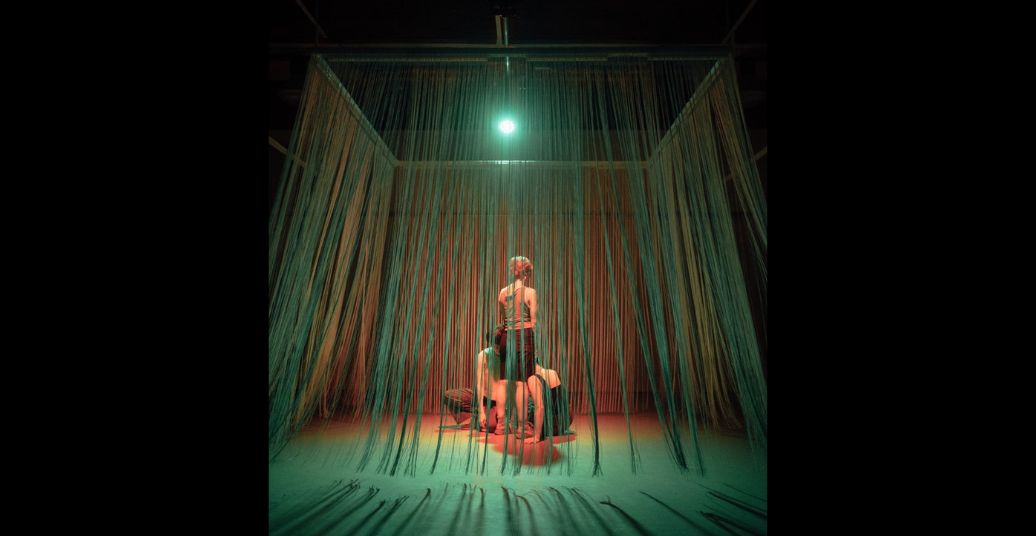 Running from 27 August to 1 September 2022 at Berliner Ringtheater, “after aftershock shock” by Jingyun Li and Saori Hala is a multimedia dance performance that explores what it means to shake, but not necessarily be shaken.

It begins subtly, almost imperceptibly, the ripples of movement. With feet anchored, and knees softened, her upper body is bobbing like a buoy at sea. But then again, she could just as well be breathing — in and out, her ribcage rising and sinking, her stomach cresting and crashing — in that day-to-day dance we call ‘being’. So unaffected is Susanna Ylikoski’s rocking, that if it wasn’t for the music and the lighting cues, I would have questioned whether the performance had started or not. This, for me, is what“after aftershock shock” really brings home — the fact that energies are constantly running through every cell, vessel, and sinew of our bodies, and that whenever pent-up pressures are provoked or displaced, then seismic waves, as in an earthquake, are released. Those waves shake us and those around us. Indeed, it soon becomes clear to me, as Ylikoski’s rocking starts to pick up in both pace and precision, that this is a performance about what it means to shake.

Now Ylikoski is joined by dancers Saori Hala and Asuka Julia Riedl. The three performers, each in their own space and on their own tangent, call out their actions in Finnish, Japanese, and German: “Minä ympyröin.” “蹴る.” “Ich schwinge.” “Minä väännän.” “押す.” “Ich falle.” This is a multi-lingual performance that is as much concerned, it seems, with how words shake, as bodies do. Onomatopoeia is the dancers’ playground, as they swing, slide, and stomp across the stage. I observe how the phrase “I shuffle” reverberates as much in their vocal cords as in the soles of their feet. I observe, too, how these vibrations are picked up and repeated by each of the dancers in a piece that also appears to be about repercussions. Their reiterations are not mirror-images of one another, however, but rather take on more momentum and definition with every quiver and quake.

With every reverberation, I keep expecting to see a certain violence. The sort of violence that turns a jiggle into a judder, and a shiver into a shudder. The sort of violence that takes hold of the body with such a firm grip that there is little one can do but surrender to it. I am not talking about a shaking body anymore here, but rather a force — be it from within oneself or outside — that shakes the body. I am talking about the body losing control and about limbs falling apart at the seams. Rarely do I see the dancers do just that, however. Or, in fact, even attempt to simulate a sense of submitting to something bigger and more fiercely formidable than themselves. Even when the strobe lighting bleeds to red, the swelling musical score whirs to a siren, and an automated voiceover intones “Brace your head, now, now, NOW!”.

The only time I sense a threat of danger in the performance comes not from the dancers, but rather from when the stage-set begins to sway. A metal square is suspended from the ceiling with fine string curtains hanging from it on all four sides. At first, they are hung in such a way that reminds me of the gabled roof of a Japanese temple. They are then lowered to form something like a white cube, before being ceremoniously gathered into a knot by the performers at the centre of the stage — much like the way one might tie a mosquito net above a bed. It is then that the whole structure begins to shake. At first hypnotically. And then more violently, until I feel seasick. Which just so happens to correspond to one of the lines from the poem that is projected from the two monitors either side of the stage:

The water was fallen.

The ground falls to me.

Beyond up and down.

“after aftershock shock” is a multimedia dance performance. It combines poetry and spoken word by So Young H. Kim, with choreographed movement by Saori Hala, dramaturgy by Thore Walch and Dandan Liu, sound by Kyoka, lighting by Haesoo Eshu Jung, and audio-visual material by Julia Wycisk — not to mention stage machinery by Kathrin Sohlbach. This whole ensemble makes up for what the movement falls short of — namely, an element of surprise, if not shock. I feel that what is missing from what is otherwise a strong concept is that moment as an audience member when I find myself caught off-guard, disturbed even, by something unexpected. Something out of the ordinary. Something off the scale. Since that is, ultimately, where shaking can take us.

Rather than simply ‘exploring different forms and scales of shaking,’ then, as the programme of the performance describes, I’d encourage Li, Hala, and their team to also probe all those pent-up energies and pressures that exist within us and around us, and which have the potential to surpass our experiences of form and scale. That is, to really shake us — perhaps, even, unto the core. For only then will we arrive at the ‘after’.

“after aftershock shock” by Jingyun Li and Saori Hala is running from 27 August to 1 September 2022 at Berliner Ringtheater.