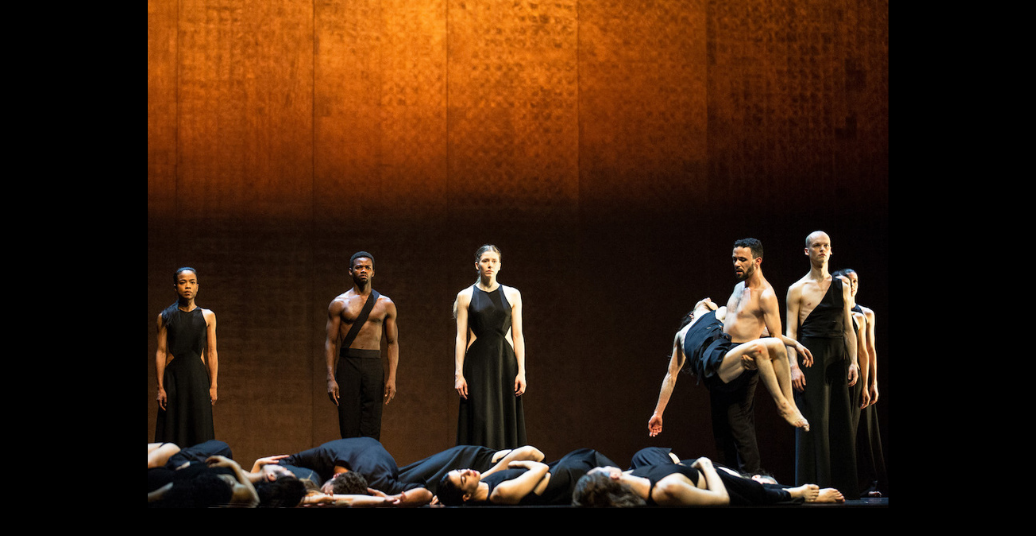 They say there should be five acts to any tragedy: 1) Exposition, 2) Rising Action, 3) The Climax, 4) Falling Action, and 5) Resolution. But then, this in no Ibsen or Shakespeare. This is Sasha Waltz & Guests, and this is a symphony of four movements. Which is to say, there is no resolution to be found in “SYM-PHONIE MMXX”, which had its world premiere on 13 March 2022 and next shows on 18 and 19 March at the Staatsoper Unter den Linden Berlin.

Lights up and I am at once reminded of the contested Parthenon Sculptures at the British Museum, which I often visited as an undergraduate student living in halls of residence on Russell Square (the poshest postcode I’ll perhaps ever have). At first, the east frieze depicting the Panathenaic festival in honour of Athena’s birth comes to mind: Olympian gods in peaceful repose, reclining on one another, or else languidly pulling at each other’s limbs in perfect counterbalance. An image of composure. It is soon replaced, however, by the furore of its neighbour, the north frieze, portraying the bloody battle between centaurs and Lapiths: riders and their horses charging forward, legs rearing, fists flailing, nostrils flaring. Indeed, this is the battle that has since come to symbolise humanity’s struggle between bestial inclinations and civilised behaviour — a battle which, as Sasha Waltz shows in “SYM-PHONIE MMXX”, was neither lost nor won, but is rather ongoing. Admittedly, it is a point made all the more poignant — painful even — when one learns that the piece was written two years ago in the first throws of the pandemic, but, due to several postponements, only, and I believe inadvertently, had its premiere this March 2022 when Russia invaded Ukraine. And while the choreographer insists in an interview with B.Z. Berlin that she hasn’t changed anything about the piece since its initial conception, it nevertheless has ‘an incredibly topical reference that almost frightens (her)’. Conflict, in all its manifestations, is never far from our screens, which, I suppose, is why there is no real resolution to be found both on and off the stage. Armies of dancers advance only to retreat and advance again. They wage war with one another only to withdraw and brawl again. They clash, crash, and crusade only to quell and come to blows again. Bang, bang, bang, blood is shed, mopped up and spilled again. All for, it seems, the sake of a wall. A wall. A wall.

A bronze wall is erected at the back of the stage. It reminds me of the Berlin Wall Memorial on Bernauer Straße, where I pop out for my daily walks in between writing. And, while I always find it a humbling experience to place myself in its imposing presence, the grave difference here is that Waltz’s dancers cannot pass through the partition, as I do almost every day, weaving my way in and out of the rebars that once held up the original ‘Anti-Fascist Protection Rampart,’ as the GDR authorities called it. (Which at once reminds me of Putin’s claim of the supposed ‘denazification’ of Ukraine.) Rather, her dancers are contained, if not detained, by the wall. Penned in like unwitting skittles on a bowling alley. Which is an image made ever more convincing when the bronze wall suddenly appears stage left and makes its way, slowly but surely, across the stage, knocking down dancers into the wings one by one, until … Strike! The stage is empty. The pit silent. Stillness. But not for long. After all, humans have a habit of finding their way, if not through, then at least around or, indeed, over walls. Thus, the action continues, albeit this time with the bronze barrier closing in on the dancers from stage right. Where it goes next is not hard to predict. Walls, with time, tend to fall, do they not?

21 dancers dressed head-to-toe in black pace up and down the diagonals as if part of a police patrol. They soon break out of their strict formations, however, and burst into bustling crowds and clusters. Striving to be seen, they climb up on one another’s shoulders, punching the air, or else holding up invisible placards. Determined to be heard, they stamp their feet in unison, or cup their hands around their mouths to scream silent mantras against injustice. They are at a protest, this much is clear. Indeed, Waltz traces her inspiration for the piece back to the democracy movement in Hong Kong and, later, to the Black Lives Matter movement which swept the world. Or are her dancers, perhaps, embroiled in a riot? For their fists soon turn to one another, their faces fuming. Someone’s to blame. Individuals are singled out from the gang: picked upon, blackjacked, and kicked in. At which point someone tries to intervene. They’re going too far now. He didn’t deserve that. Oh yes, he did. Which side are you on? This is ‘us’ against ‘them’ now, buddy. Two camps form in either corner of the stage — the space between them taut with testosterone — until someone snaps. A weapon is hurled through the air … Be it a stone, hand grenade or, indeed, Molotov Cocktail, it surely signals all-out war. Dancer’s bodies are at once weaponised, where limbs become bludgeons, batons, and bōs — targeting their opponents with pinpoint precision. Indeed, their movements are inarguably reminiscent of martial arts and make for, at times, uncomfortable moments when you find yourself squinting and squirming in your seat as if watching an MMA fight. The thing is, there is neither a ref nor an applauding audience to measure their movements, just the menacing sound of Georg Friedrich Haas’s microtonal score, which incrementally crescendos and decrescendos only to crescendo again, until — SILENCE. Or, as the composer describes it in the aforementioned interview, ‘DARKNESS’.

In complete silence, from the orchestra pit to the upper circle, 19 dancers stand in a line shoulder-to-shoulder at the back of the stage. As they walk with trepidation towards the audience, one foot in front of the other, two more dancers pick their way through them — playing God, it seems, in some grave game of Grandma’s footsteps. They lay them to rest, one-by-one, on the ground. Gently. Respectfully. Nay, reverentially. For there is something sacred in death. A stillness that has us pinned to our seats. Indeed, there are few scenes more powerful than this. It is as though I am witnessing soldiers going up and over into No Man’s Land and knowingly walking to their deaths. And all the while with a real war raging in Ukraine. It’s heart-breaking stuff. Then with only one woman left standing, we wonder where Waltz can go now? Is this the finale? The grand denouement? The end?

Step-by-step, limb-by-limb, the entire scene is reversed. It is as if I am sat on a sofa pressing the rewind button on a remote-control device, albeit not sped-up, but rather transpiring at the same painstakingly slow pace. Waltz undoes time before our eyes, but surely only to make us sigh, if only it were that easy, and ultimately to show us that as soon as her dancers are back to square one — stood in a line shoulder-to-shoulder — they face yet another conflict round the corner. Waltz never brings her dancers into a state of harmony, despite the show’s Greek name meaning just that. Rather, the final scene sees the great bronze wall appear from above — like the planet Mars or, perhaps, Mars the God of War himself — and gradually lower down over their heads, inch by inch. And while all her dancers escape by the skin of their teeth, I am not exactly left with a feeling of relief, but rather with the uneasy sense that the real message here is that there is no resolution. For there can be, frankly, no return after war.

The Parthenon Sculptures still stand in the British Museum, despite the fact that the Greek government has not only campaigned for their return since 2003 but has also opened up a purpose-built museum for their display, The New Acropolis Museum, in Athens, thus countering the British Museum’s claims that the Greek authorities couldn’t possibly look after them. A claim, I might add, that is wildly ironic given the state of the Museum’s Greek and Assyrian galleries of late, with leaks leading to closures for much of last year. But the point here is that the conflict continues to rage over 200 years since the sculptures were initially taken. And is not set to come to a resolution anytime soon. Somethings are just taken.

“SYM-PHONIE MMXX” by Sasha Waltz & Guests had its world premiere on 13 March and will be shown again on 18 and 19 March 2022 at the Staatsoper Unten den Linden Berlin. Concept and choreography: Sasha Waltz, Music: Georg Friedrich Haas.