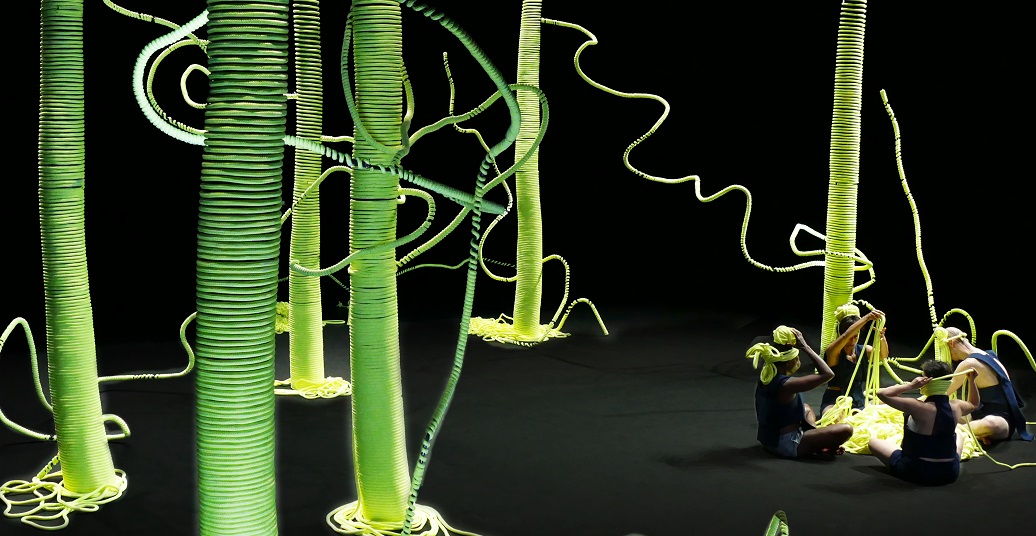 In their newest chat review the tanzschreiber authors write about the symbolic and political aspects in “White Dog” by Latifa Laâbissi.

Alex Hennig: How did Laâbissi use this idea of escaping, or running away, as a political tool?

David Pallant: The four performers built up repetitive cycles of communal movement, as though developing rituals and traditions together. So when one or more of them left the group, I saw an individual choosing to distance themselves from society, or deciding to challenge received wisdom. However, the set looked like a clearing in a neon forest, reducing the physical boundaries of the piece, so that no one could escape very far, or for very long! I’m still unsure as to whether or not those limitations were intentional, or if Laâbissi was actually presenting escape as a workable solution…

From what, or whom, do you think that they were escaping?

It’s hard to say! The symbolism of the piece, whilst clearly present, was at times difficult for me to read. The breakouts from the group could be seen as a reaction against mass thinking, and mainstream convention. There was also something quite tortured about the physicality of these ‘escape solos’ – I found myself wondering if they touched upon the painful freedom of being marginalised from society.

Was there any symbolism that you could read?

The piece started with the performers sat cross-legged in a circle, knotting a large pile of neon rope together. It instantly made me think of tribal societies, or of our ancestors, sitting around a fire, telling stories, weaving myths. Then it became clear that they were making the ropes into intricate shapes which could be worn around the neck, or on the head, or swung around rhythmically. I saw the ropes being invested with significance over time, until they became the cultural, or even spiritual, framework of the piece.

What questions did the piece leave you with?

I was left questioning the choreographer’s intentions. Were clichés around rituals being embraced, or undermined? Aside from the contemporary aesthetic and music, how can I connect the work to our present day? And, ultimately, am I asking the questions Laâbissi hoped for, or did I just not “get” it…?! I’m interested to hear what you think (and whether you have any answers to my questions!) once you’ve watched the piece on Saturday 🙂