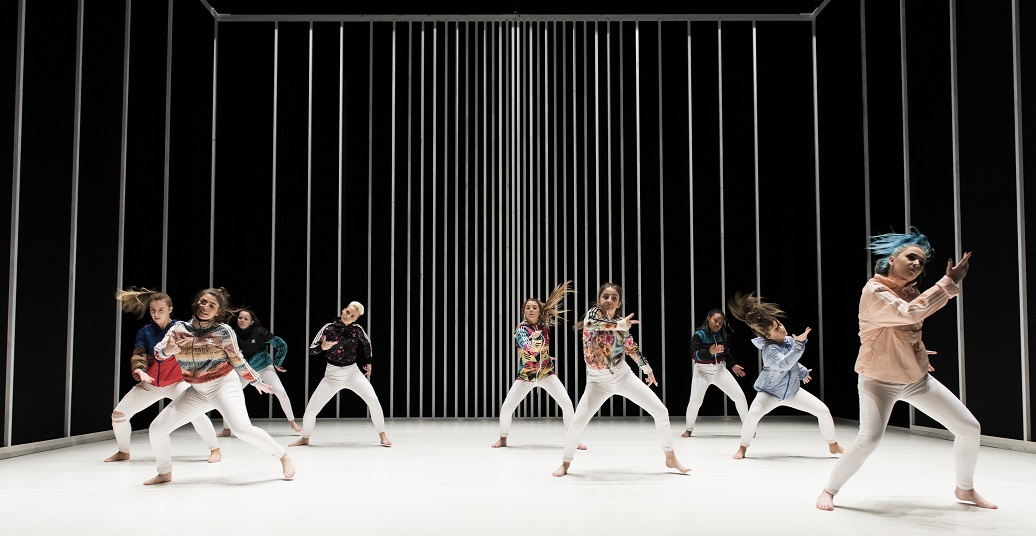 In this chat review the tanzschreiber authors David and Beatrix talk about the intense performance “Hard to be Soft” by Oona Doherty.

David Pallant: In what way do you think the piece was a “prayer”?

Beatrix Joyce: There were direct references to prayer and religion, i.e. the burning of incense, the choral song, Doherty’s white clothing and the moments in which she pointed towards the heavens, her body moving through images reminiscent of religious iconography – in channelling the stories of Belfast citizens, she addressed the role religion plays in their daily lives. But in her artist’s talk she also mentioned her desire to “reclaim” religion beyond the constraints of its manifestation in society. So I think the piece as a whole can also be considered as a form of prayer, in which hope is the driving force.

What did the physicality of the piece evoke for you?

She was working with three very different types of energies – her own, fierce yet refined form of solo choreography, the raw power of a troupe of fearless young women, and the heavy, meaty strength of two grown men. It was captivating how, even though their bodies were very different, they all seemed to share the intention of moving between “the hard” and “the soft”. They each conveyed the desire to enforce and defend while also harbouring the sensitivity of being deeply in touch with their inner states and emotions.

Was there a moment in the piece which you found particularly touching?

Actually, a moment I found striking was a moment which later turned out to be a technical fault. Towards the end of the piece’s second solo, in this case performed by Doherty herself, the sound abruptly disappeared, with the classic harsh “pang” of speakers being shut down in one go. She continued the choreography in silence, and the whole audience watched with bated breath. The dream-like cinematography was shattered and the socio-political and economic problems she was addressing suddenly became very real. The distance disappeared and I felt the vulnerability – and strength – in watching her as she told her story from her guts and delivered the message she needed to deliver.