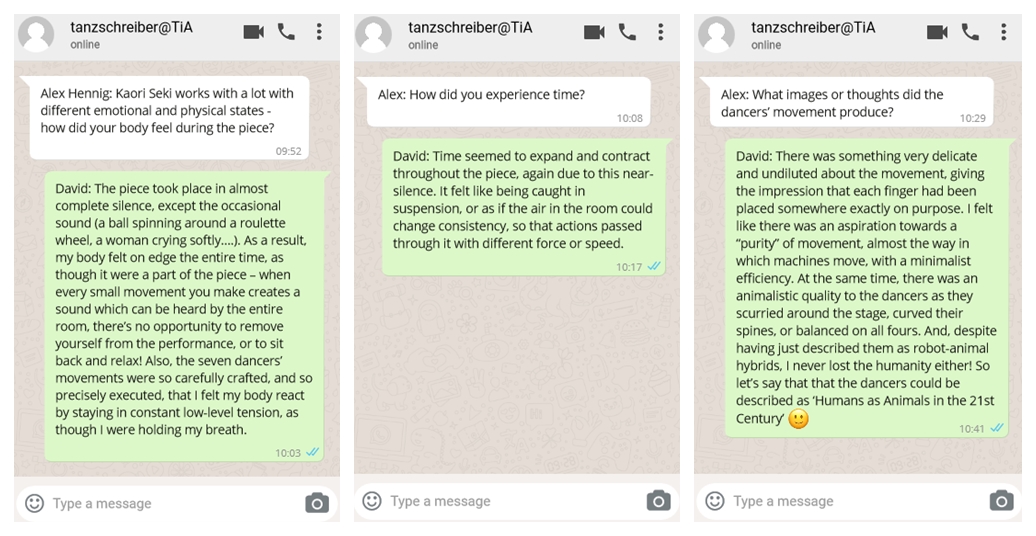 Alex Hennig and David Pallant talk about the unique relationship to time in Kaori Seki’s piece “WO CO” at HAU2.

Alex: Kaori Seki works with a lot with different emotional and physical states – how did your body feel during the piece?
David: The piece took place in almost complete silence, except the occasional sound (a ball spinning around a roulette wheel, a woman crying softly….). As a result, my body felt on edge the entire time, as though it were a part of the piece – when every small movement you make creates a sound which can be heard by the entire room, there’s no opportunity to remove yourself from the performance, or to sit back and relax! Also, the seven dancers’ movements were so carefully crafted, and so precisely executed, that I felt my body react by staying in constant low-level tension, as though I were holding my breath.

Alex: How did you experience time?
David: Time seemed to expand and contract throughout the piece, again due to this near-silence. It felt like being caught in suspension, or as if the air in the room could change consistency, so that actions passed through it with different force or speed.

Alex: What images or thoughts did the dancers’ movement produce?
David: There was something very delicate and undiluted about the movement, giving the impression that each finger had been placed somewhere exactly on purpose. I felt like there was an aspiration towards a “purity” of movement, almost the way in which machines move, with a minimalist efficiency. At the same time, there was an animalistic quality to the dancers as they scurried around the stage, curved their spines, or balanced on all fours. And, despite having just described them as robot-animal hybrids, I never lost the humanity either! So let’s say that that the dancers could be described as ‘Humans as Animals in the 21st Century’ 🙂

Alex: So did the piece leave you with a certain change of perspective towards “humanity” in general?
The stage was covered with black sand, like volcanic ash, so that the dancers’ skin and flesh-coloured costumes became sooty as they moved. I could again see some notion of human “purity” changing as it came into contact with an industrialised world – a purity which could come from our origin as wild animals, or from our nature as spiritual beings perhaps…? The piece also found new ways in which the subtleties and contradictions of humanity can be expressed bodily (and what is dance, ultimately, if not that?!). I didn’t see the piece as having an overall thesis, just as lives don’t usually have a concrete motive – in that sense, it was like watching a very touching depiction of modest lives unfolding in front of us.