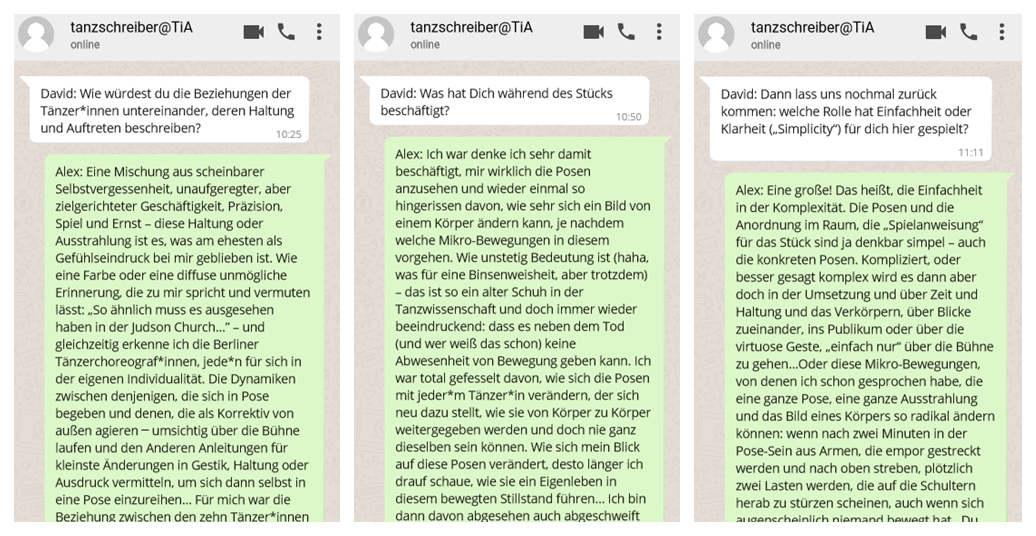 In this Tanz im August Review David and Alex talk about the simplicity in the complexity in Deborah Hay’s piece “ten” at Radialsystem.

David: How would you describe the relationships between the dancers, and their attitude and presence?
Alex: A mixture of apparent self-forgetfulness, unagitated but single-minded activity, precision, playfulness and seriousness – this attitude or aura made the most impression on me. Like a colour or a diffuse impossible memory that talks to me and leads me to imagine that this is how it must have looked in the Judson Church. And at the same time I recognise the Berlin dancer-choreographers, each in their own individuality. The dynamics between those who strike poses and those who act as a corrective from outside – walking cautiously across the stage and conveying instructions to the others about smallest changes in gesture, position or expression, and then taking up a pose themselves …
For me the relationship between the ten dancers was one of extreme commitment and flexibility. They all followed a joint plan, acting at every moment as a group and individually – when they surprise one another, for example, eliciting a smile or a short exchange. And then this music, the groove, the drama, which didn’t seem to put them off their stride, and of course played a huge part in the monumental and humorous effect/aura. Casual monumentality!

What were you involved with during the piece?
I think I was very much involved with really looking at the poses, and then again entranced by how much an image of a body can change, depending on the micro-movements going through it. How unsteady meaning is (ha ha, what a platitude, but still). It’s an old hat in dance studies, though it never ceases to impress, that there can be no absence of movement apart from death (and who can really say?). I was riveted by the way in which the poses changed with each dancer who joined in, how they were passed on from body to body without quite being able to stay the same. How my view of these poses changed, the longer I looked at them, how they led a life of their own in this moving stillness …
But apart from this I also digressed and thought now and then about ‘training’ and ‘rehearsal’. What do we actually train and rehearse for? Is it about the outward image or our bodies, and how does this fit together? AND – to come back to the music in particular – there was this amusing oscillation between party and drama. You always had the feeling of HERE WE GO, without knowing what and where. So then I asked myself whether they were rehearsing for the revolution, or whether I hoped they were, but that’s going to far … 😉

So let’s go back a bit. What role did simplicity or clarity play for you here?
An important one! I mean, simplicity within complexity. The poses and the configuration within the space, the ‘rules of the game’, are extremely simple – also the concrete poses themselves. It only gets complicated, or more precisely complex, in the realisation and through time and attitude and embodiment and glances at one another or the audience, or through the virtuosic gesture of ‘simply’ walking across the stage … or these micro-movements I’ve spoken about, which can change an entire pose and aura and image of a body so radically. When after two minutes of being a pose of outstretched arms there suddenly appeared to be two burdens tumbling down onto the shoulders, even though no one had moved at that moment … as you see, I was able to get a lot out of this simplicity 😉