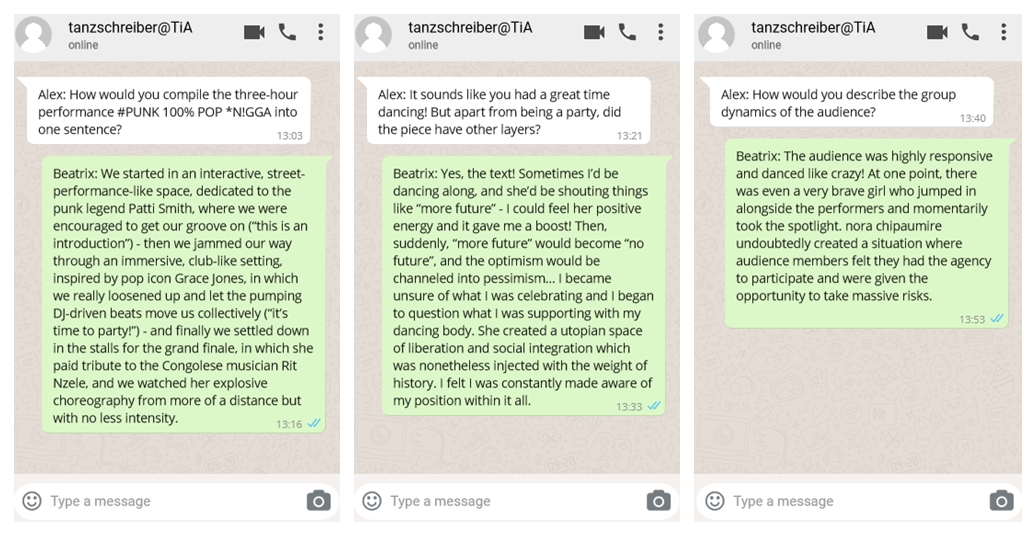 Alex: How would you compile the three-hour performance #PUNK 100% POP *N!GGA into one sentence?
Beatrix: We started in an interactive, street-performance-like space, dedicated to the punk legend Patti Smith, where we were encouraged to get our groove on (“this is an introduction”) – then we jammed our way through an immersive, club-like setting, inspired by pop icon Grace Jones, in which we really loosened up and let the pumping DJ-driven beats move us collectively (“it’s time to party!”) – and finally we settled down in the stalls for the grand finale, in which she paid tribute to the Congolese musician Rit Nzele, and we watched her explosive choreography from more of a distance but with no less intensity.

It sounds like you had a great time dancing! But apart from being a party, did the piece have other layers?
Yes, the text! Sometimes I’d be dancing along, and she’d be shouting things like “more future” – I could feel her positive energy and it gave me a boost! Then, suddenly, “more future” would become “no future”, and the optimism would be channeled into pessimism… I became unsure of what I was celebrating and I began to question what I was supporting with my dancing body. She created a utopian space of liberation and social integration which was nonetheless injected with the weight of history. I felt I was constantly made aware of my position within it all.

How would you describe the group dynamics of the audience?
The audience was highly responsive and danced like crazy! At one point, there was even a very brave girl who jumped in alongside the performers and momentarily took the spotlight. nora chipaumire undoubtedly created a situation where audience members felt they had the agency to participate and were given the opportunity to take massive risks.

Was that how it felt all the way through?
Well, it was long…There were many moments where my attention would naturally drift elsewhere. But she had a way of drawing me back in. Every time I was convinced she must be nearing her limits, her inner-power of survival and endurance would return and take us to ever higher heights.