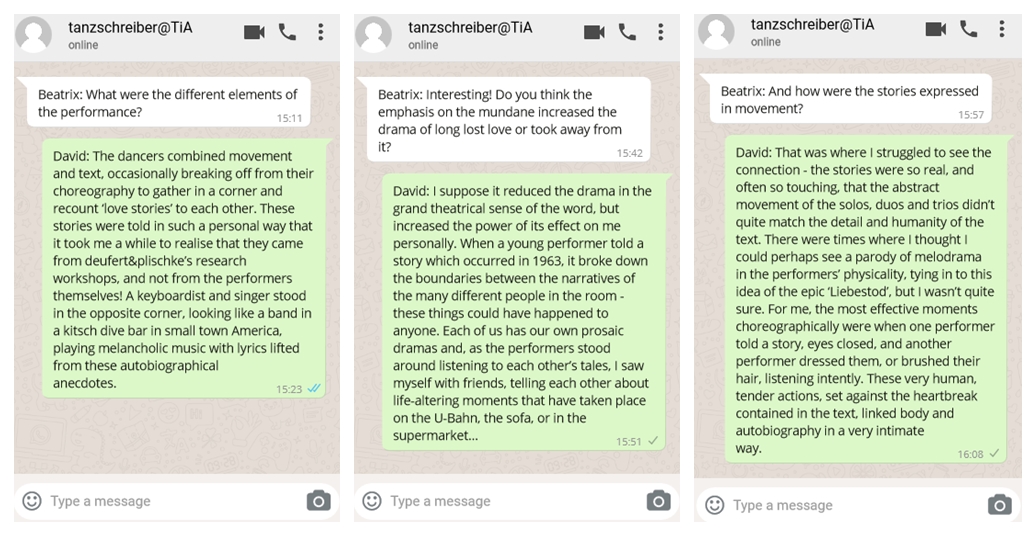 The tanzschreiber authors Beatrix Joyce and David Pallant analyze the emotional piece “Liebestod” by deufert&plischke in this chat review.

Beatrix: What were the different elements of the performance?

David: The dancers combined movement and text, occasionally breaking off from their choreography to gather in a corner and recount ‘love stories’ to each other. These stories were told in such a personal way that it took me a while to realise that they came from deufert&plischke’s research workshops, and not from the performers themselves! A keyboardist and singer stood in the opposite corner, looking like a band in a kitsch dive bar in small town America, playing melancholic music with lyrics lifted from these autobiographical anecdotes.

Was there a story you particularly connected with?

They were all fascinating to me, because they dealt with the minutiae of the struggles within a relationship, or the struggles of starting one. There was a story of someone who was visiting their boyfriend in Berlin, including a seemingly irrelevant detail of where they ate breakfast together. He gave them a 19 page letter as he left, which they read as a love letter until the final sentence (which actually became the final sentence of the entire piece) – “es tut mir leid, es ist aus”. Something about this combination of the mundane and the monumental was extremely striking, and I saw it throughout the piece, setting normality in contrast to the epic romantic narratives which surround us culturally e.g. the “Liebestod” of the title.

Interesting! Do you think the emphasis on the mundane increased the drama of long lost love or took away from it?

I suppose it reduced the drama in the grand theatrical sense of the word, but increased the power of its effect on me personally. When a young performer told a story which occurred in 1963, it broke down the boundaries between the narratives of the many different people in the room – these things could have happened to anyone. Each of us has our own prosaic dramas and, as the performers stood around listening to each other’s tales, I saw myself with friends, telling each other about life-altering moments that have taken place on the U-Bahn, the sofa, or in the supermarket …

And how were the stories expressed in movement?

That was where I struggled to see the connection – the stories were so real, and often so touching, that the abstract movement of the solos, duos and trios didn’t quite match the detail and humanity of the text. There were times where I thought I could perhaps see a parody of melodrama in the performers’ physicality, tying in to this idea of the epic ‘Liebestod’, but I wasn’t quite sure. For me, the most effective moments choreographically were when one performer told a story, eyes closed, and another performer dressed them, or brushed their hair, listening intently. These very human, tender actions, set against the heartbreak contained in the text, linked body and autobiography in a very intimate way.