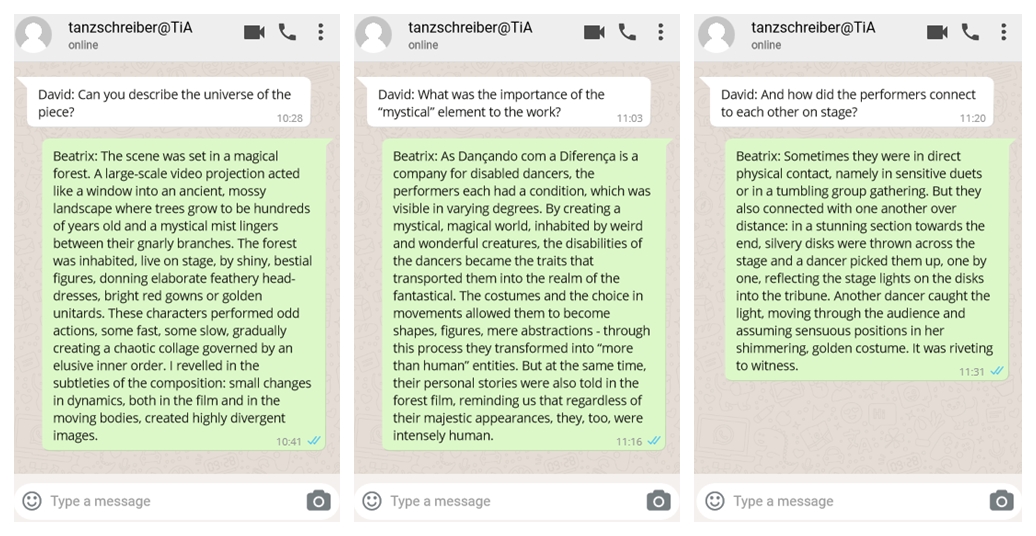 In this review Beatrix Joyce is talking to David Pallant about the piece “Happy Island” by La Ribot.

David: Can you describe the universe of the piece?

Beatrix: The scene was set in a magical forest. A large-scale video projection acted like a window into an ancient, mossy landscape where trees grow to be hundreds of years old and a mystical mist lingers between their gnarly branches. The forest was inhabited, live on stage, by shiny, bestial figures, donning elaborate feathery head-dresses, bright red gowns or golden unitards. These characters performed odd actions, some fast, some slow, gradually creating a chaotic collage governed by an elusive inner order. I revelled in the subtleties of the composition: small changes in dynamics, both in the film and in the moving bodies, created highly divergent images.

What role did the music play in this composition?

The strange figures were bolstered in their actions by the emotive sound score. The dramatic, invigorating piano, which set the scene for a thriller, was later followed by pumping beats and eclectic melodies, reminiscent of a wild, haphazard disco, with a kind of “nightlife goes Alice In Wonderland” feel.

What was the importance of the “mystical” element to the work?

As Dançando com a Diferença is a company for disabled dancers, the performers each had a condition, which was visible in varying degrees. By creating a mystical, magical world, inhabited by weird and wonderful creatures, the disabilities of the dancers became the traits that transported them into the realm of the fantastical. The costumes and the choice in movements allowed them to become shapes, figures, mere abstractions – through this process they transformed into “more than human” entities. But at the same time, their personal stories were also told in the forest film, reminding us that regardless of their majestic appearances, they, too, were intensely human.

And how did the performers connect to each other on stage?

Sometimes they were in direct physical contact, namely in sensitive duets or in a tumbling group gathering. But they also connected with one another over distance: in a stunning section towards the end, silvery disks were thrown across the stage and a dancer picked them up, one by one, reflecting the stage lights on the disks into the tribune. Another dancer caught the light, moving through the audience and assuming sensuous positions in her shimmering, golden costume. It was riveting to witness.

How did you connect this “Happy Island” to our wider world?

The dancers shared a space with us where they seemed liberated from the way their bodies are perceived in society. I think anyone can relate to this: we each experience, in different domains, the constraints society imposes on us. Perhaps it is the primal desire for freedom that connects us all.