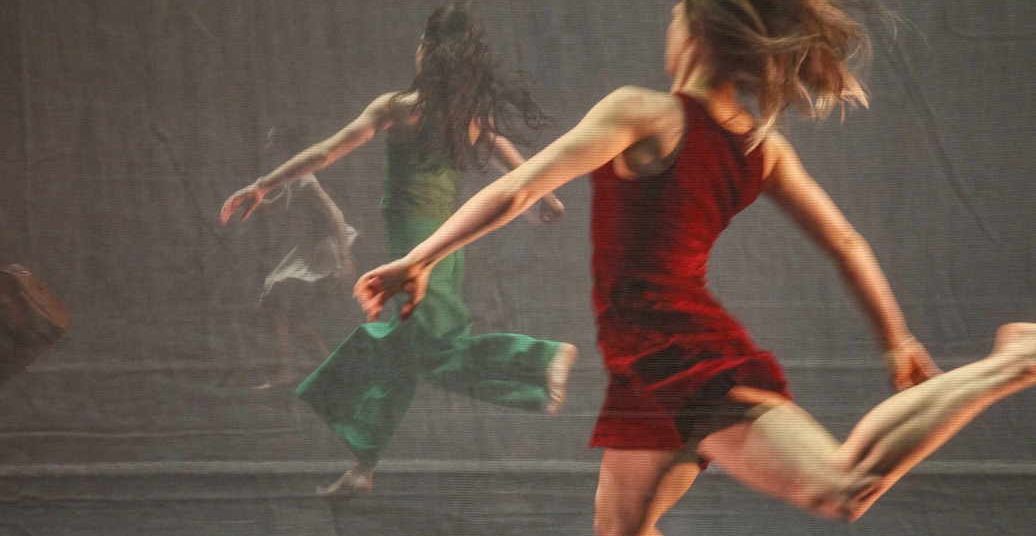 In “clair obscur”, a piece in the repertoire of cie. toula limnaios since Spring 2021 and performed at HALLE Tanzbühne Berlin, choreographer Toula Limnaios dreams up a disquieting and deftly executed dance of Doppelgängers.

In dancer Laura Beschi I meet my double. Petite. Pale pink dress. Long brown hair pulled back in a ponytail. The archetypal ballerina. Walking on stage as if the whole world is watching her. Which it currently is, here in Berlin, where I find myself staring back at her — the dancer I once was and could have still been — as the fated and perhaps, at times, frustrated dance critic. The experience is curious, uncanny even. It gives me goosebumps. I cannot help but keep one corner of my eye on her, despite wanting to give the whole cast and choreography my full attention. It is as if I am sat on a train looking out of the window at an ever-changing landscape, into which I want to escape, but which is inescapably framed by my own reflection. My unfaltering image. My unshakable shadow. “I know you’re there”, the Gollum-like voice of dancer Karolina Wyrwal gasps. “Could you just stop?” Then, snapping: “Stop following me!” But follow is all a shadow ever does …

“clair obscur” is a disquieting and deftly executed dance of Doppelgängers, in which the audience are reminded that, just as Otto Rank once wrote, a person’s past persistently clings to them and becomes their destiny as soon as they try to rid themselves of it. For instance, while the show begins with lone dancer Daniel Afonso lifting effortlessly up from his own chalk outline in an apparently abandoned crime scene, it ends with the entire cast instantaneously collapsing, just as he was, in a heap. There is no escaping death, this much Limnaios makes clear, however much the ego, with flailing limbs, tries to fight it. And yet, there are two marked differences between the opening and closing scenes. Whereas Limnaios begins with one dead body and a briefcase, she ends with eight fallen figures and no sign of that ominous bag. If that is to say that all emotional and psychological baggage has been dealt with, then what of all the undealt with, physical bodies now littering the floor?

As I watch the dance I am reminded of Plato’s allegory of the cave, of C G Jung’s archetype of the shadow, and of Oscar Wilde’s story of ‘The Picture of Dorian Gray’. Which is to say, the figure of the double abounds in philosophy, psychology, and literature, indeed, in society across centuries. As it does here and now. Here in this dance, which is no duet, but an ensemble of silhouettes, at times shifting about the stage in sheer synchronicity, at others splitting off into silent soliloquies. (Let’s just say that only Limnaios could get away with a glorified Mexican wave!) Indeed, it seems to me that the figure of the double is, for the choreographer, not necessarily a dual entity comprised of a person and their shadow mirroring one another, but rather a multiplicitous body that manifests itself on several levels. Hence, the three gauze screens that divide the stage into four, transforming the theatre into something of a palimpsest, where, with each gauze screen, the dancers in the distance become ever more indistinct and in and out of which they inscribe the imprints of one another’s movements. Until, that is, the lights shine blindingly down on us, the audience — seated on opposite sides of the stage, on chairs 1.5 meters apart, and with, it soon dawns on us, our own shadows. “Major wars and extensive disturbances of society,” Rank writes, “are among those occasions which cause man to ask himself fundamental questions about his identity — an identity which he finds existing on various levels or even in fragmentation”.

Created during the pandemic, “clair obscur” was choreographed with screens in mind — screens that we have learnt to live with, and through which we have inevitably played out our identity, on multiple platforms, and, perhaps, even in fragments. Admittedly, it was during the first lockdown that I took to dancing again, tuning in to classes online in my flat, with nobody watching. Only now am I reminded of that, as I applaud her: the dancer I once was and, to a certain extent, still am. For, if anything, Limnaios’s dance of Doppelgängers is surely an invitation to embrace — rather than to fear or, indeed, hunt down, as so many literary characters are wont to do — our doubles. It seems to me to be about continually asking, as Wyrwal does: “Where are you?” And ultimately acknowledging, deep down, “I need you.”