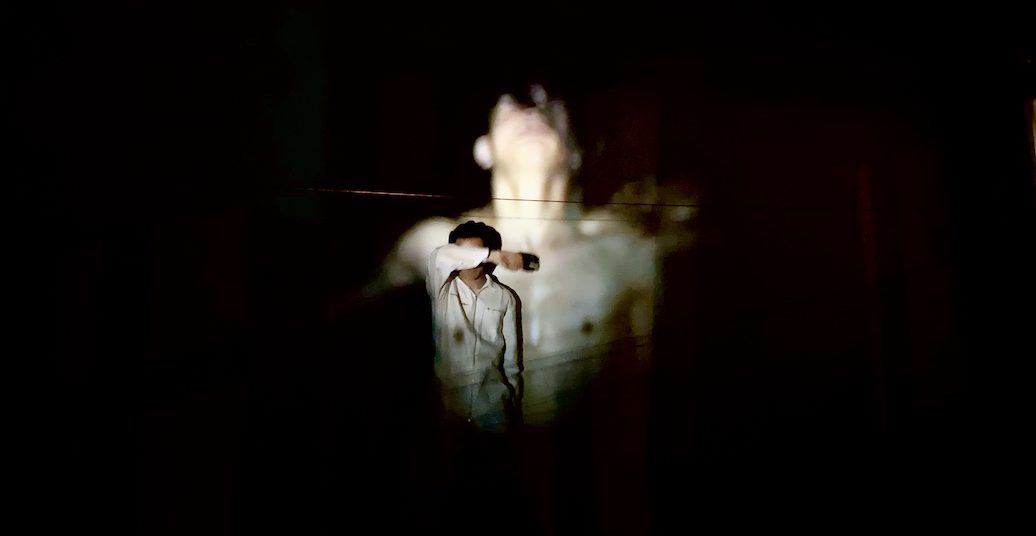 As well as being a physical exploration and an excavation of the self, “Euphoria” presents Hoyoung Im’s sharp work as a video artist and embodied composer of sound. The performance premiered at DOCK 11 from 17 to 20 February, 2022.

The breadth of DOCK 11’s cavernous performance space is made even wider by the slashes of red that are discernible even in the dark. Lengths of narrow red string stretch from the left wall to the right wall, and then back again; criss-crossing this way and that, sloping from higher to lower; angled from somewhere further forward to slightly further back. The shadows of each of these strings, too, create the same pattern. I trace the threads like one would follow the ball in a tennis match — left to right to left …

Oh! Who is that at the back of the stage?

Choreographer Hoyoung Im is lying tucked under a duvet scrolling on his phone, his face lit up by the screen. As he scrolls in the dredges of imminent sleep, the phone falls on his face. It happens to the best of us, eh? And so, he recedes into slumber. What follows is a narration of his dream by Im himself — a short, yet riveting tale of a tiger …  Perhaps due to Im’s background in theatre, “Euphoria” has several such theatrical moments that signpost the story and create order in the narrative. An elucidation of this is best represented by my attempts at revising primary school mathematics for my next tutoring side-job:

In “Euphoria”, Im attempts to carry out an enquiry into the balance between the emotions of euphoria, anger, sorrow, and lust using and integrating jesa, the traditional Korean ancestor ceremony. Yet, by not reducing the performance to mere explanation or didactics, he does not fall into the trap of being an Asian performer presenting a cultural practice to his audience in this Central European setting.

In an exploration of what I sense to be the edge of euphoric delirium, Im dives into the weave of red strings that divide us from him. They support him and obstruct him at the same time, entangling him like a caged, striped tiger. The same objects take on another form in the next section: Im, exuding explosive rage, pulls the strings through a constructed wooden frame. The scene ends with a visual of the strings, now reminiscent of blood, oozing through a shirt that is mounted onto the wood.

Pieces of clothing continue to be of significance throughout the piece. In the penultimate moment of “Euphoria”, a video projection set on a seaside cliff looms over us. The video shows Im’s many different avatars — each in a different outfit — grooving to a thumping beat. One by one, they shed their clothing — these outer skins that appear to influence his thinking and behaviour. He throws them in a heap among the rocks, liberating himself from them. The montage of Im on the video, and here in the flesh in the theatre, both end in a frenzied dance of freedom.

I come out of the theatre feeling like I haven’t seen a solo work, but rather an ensemble. My mouth feels stuffed with the memory of watching many bodies moving and many items of clothing being discarded. So here I write an elegy to Hoyoung Im’s clothes.

Elegy to a heap of clothes he was

There lying in the corner of the stage,
you were also once him.
on your breast, a glimpse
a flying tiger
Or perhaps still a cub?
yet to learn to
cherish
nourish
hold
behold
fur, claws, canines, gashes
euphoria, rage, sorrow, lust.
In you he cocooned and bloomed,
shed with care, oh Werkanzug!

Hair combed and parted,
loving nimble buttoning up
of ironed white shirts,
daily, nithyam, everyday
stacking
vertebra
upon
vertebra.
Stay polite in the wings,
until it is time
until
it is time, oh shirt, oh spine!

For days of remembering
those who came before
his ancestors, the dead
the hanbok needs to be forgotten,
left at the back of a wardrobe.
So we met you mister suit,
western, formal,
proper, tip-top
cuffed at the wrists
tucked at the waist
clipped around the neck
throats cleared twice
ready to – –
which pocket?
this one? which pocket is the rice in again?
found it.
poured, bowed, ate, ate.
hello, pleased to meet you,
good bye, oh proper proper suit!

The next morning, I speak to Hoyoung on the phone. He has a load of laundry to do and a broken washing machine. I too look dismally at my laundered clothes that need folding.

“Euphoria” by Hoyoung Im premiered on 17 February 2022 at DOCK 11, performances running this weekend at 7 pm, tickets under dock11-berlin.de.