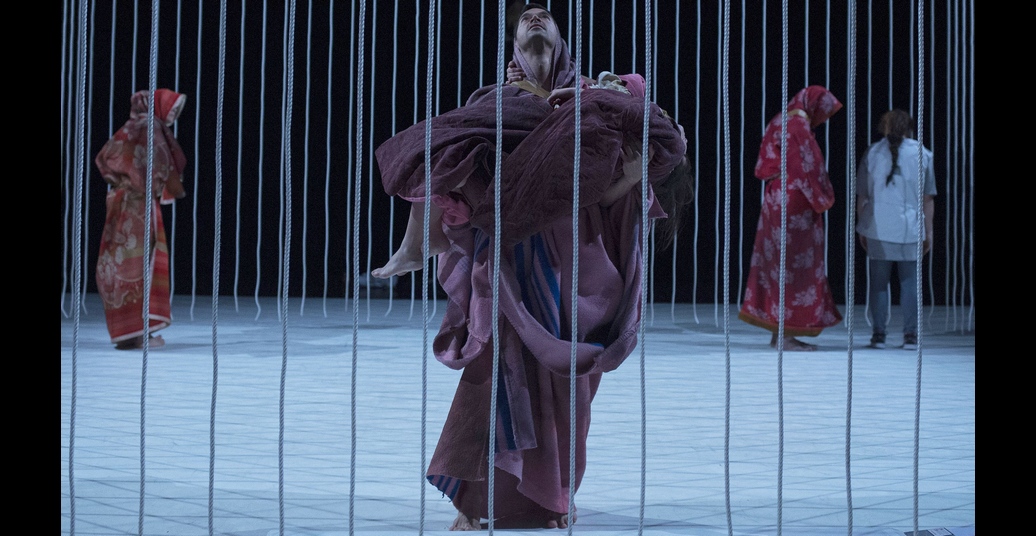 Cia Vero Cendoya’s “Bogumer (or Children of Lunacharski)” was shown at HAU1 on 17 November 2022, as part of the NO LIMITS – Disability & Performing Arts Festival Berlin. It asks the question: once the boss has been fired (literally), who is left running the show?

In 1918, in the midst of the Russian Revolution, a Moscow court put God on trial for crimes against humanity. Found guilty, God was ‘executed’ the next day at dawn, by a firing squad shooting into the sky over Red Square. This surreal event serves as the primary inspiration for the work “Bogumer (or Children of Lunacharski)”: ‘Bogumer’ is a phonetic approximation of the Russian for ‘God is dead’, and Anatoly Lunacharsky was the Marxist revolutionary and Bolshevik who presided over the trial. The piece begins with artist and choreographer Vero Cendoya reading out a list of historical ‘acts of god’ — floods, plagues, and famines going back thousands of years — along with the number of fatalities. Performer Jem Prenafeta plays with a toy hamster in a cage and Natalia d’Annunzio runs on a treadmill, while Laia Martí, Jacob Gomez, Carlos Fernández, and Linn Johansson shuffle around, enclosed in a cage of hanging ropes. At first, the symbolism seems glaringly obvious — the performers are cogs in the machinery of an uncaring society, or helpless playthings for an all-powerful god. On a loop, they step sideways onto the treadmill and are thrown off onto a waiting mattress, like products on a factory assembly line. They perform a synchronised, militaristic choreography, acting as the firing squad shooting into the sky, and the cage around them falls down. At this point, I admit that I brace myself for an hour of unintentionally heavy-handed symbolism.

I soon come to realise, however, that this is a work which has a masterful control over its tone and intention, and I re-evaluate the opening scenes as a razor-sharp pastiche of socialist realism. There follows a series of vignettes, showing individuals who are simultaneously elevated and trapped by power structures. A team of rhythmic gymnasts is berated by their sadistic coach until they have enough of her abuse, and she falls victim to a leotard-clad firing squad. A pop star is queen of her own music video, until she also flies too close to the sun and is shot down. Yuri Gagarin, the first human to go into outer space, is shown raised to an almost god-like status, but fame seems to take its toll and he dies tragically young – though in this case, is he counted among the powerful or the powerless?

The soundtrack is a jukebox of catchy tunes, the performers are endlessly watchable, and the bold humour and kitsch aesthetic make time fly enjoyably by. All this shiny packaging, however, is not merely an attempt to distract from an empty box. Rather, it allows the more complex content of the piece to slyly trickle through the gaps. The most revealing moments are those right after the climax of a gunshot. Lone dancers are left to writhe in anguished solos, or chaotic groups stamp and whoop but never really go anywhere. At one point, two performers crack open a soda can each and just stand drinking, looking at the fallen corpse. It would seem as though power vacuums can be a bewildering space in which to find yourself.

The Soviet aesthetic of the work may be pervasive, but I still feel invited to transpose its ideas onto our current social context. In particular, the role of (and effect on) the individual when power structures are dismantled. I may not want to subscribe unquestioningly to a state-sanctioned belief system, but can that be replaced with something more than cynicism? How might we come together without institutions always ultimately outgunning the individual? And after God, in more secular contexts, who or what is the next target? They are complex questions which only truly start to percolate once the sheer enjoyment of watching “Bogumer” has worn off. Cia Vero Cendoya somehow manages to create a work which matches the surreal, contradictory spirit of the 1918 ‘trial against God’, straddling the confusing gap between the momentously significant and the absurdly futile.

“Bogumer (or Children of Lunacharski)” by Cia Vero Cendoya will still be performed at HAU1 on 18 November 2022, as part of the NO LIMITS Festival.

NO LIMITS is Germany’s largest and most prominent festival for disability & performing arts and is celebrating its 10th anniversary this year. The festival is still running until 19 November 2022 at HAU Hebbel am Ufer, Ballhaus Ost, Theater Thikwa, Theater RambaZamba and FELD Theater für junges Publikum, detailed information on the program and the ticket purchase can be found at www.no-limits-festival.de/programm.