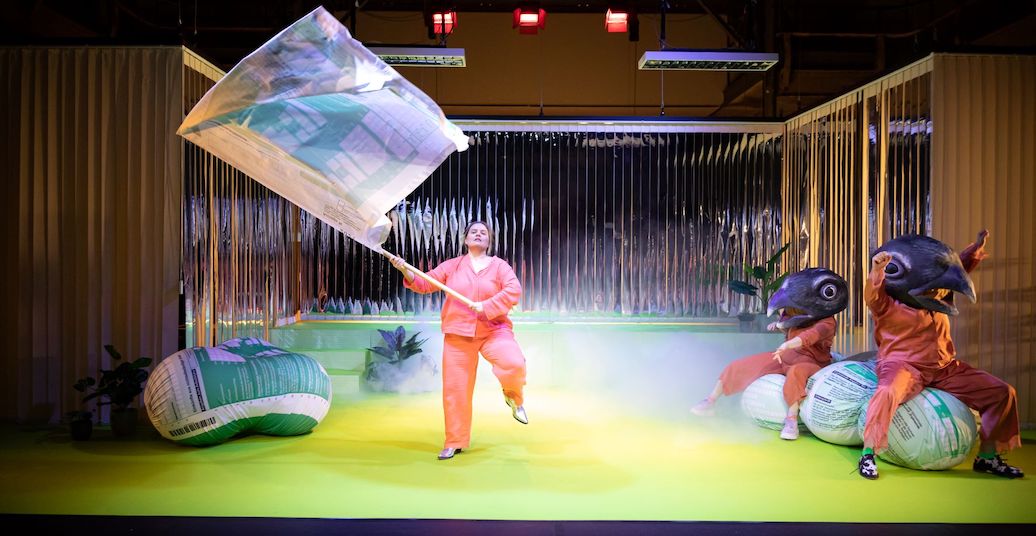 Actually… what is taxation? “Die Steuer-Erklärung” by hannsjana premiered on 22 November 2022 at Sophiensæle, and took a languid look at the absurdities of the tax system, with curious results.

There is something a little bit ‘German’ about this latest show from hannsjana, which, as the title (translating to: “The Tax Declaration”) suggests, has the theme of tax. The entire approach drips with an absurdism, a sense of careful observation, dry, ironic jokes, and a dreamlike sharpness that is quintessential of contemporary stages. Sitting among the chuckling audience, you might feel part of a collective, shared, painful cultural joke. Maybe this is, anyway, a good definition of what tax really is.

The set by Àngela Ribera is a banal lime-green nightmare office, complete with beige vertical blinds and pot plants (liveness indeterminable). Two inflated tax-form sofas sit at either side of the stage, awaiting fulfilment. One of our pyjama-clad protagonists comes out to the stage, casually dialling the local Finanzamt (‘Financial Office’), and three other pyjama-clad entities – wearing hannsjana’s signature giant bird heads – sway to the tantalising hold music. As the music fades out in a series of false endings, the dancers also seem to descend and then revive themselves, their bodies retreating and resurrecting to the generic chimes and acoustic guitar. The leading question of the piece is voiced by one of the protagonists to the operator: Was sind eigentlich Steuern? (‘What are taxes, actually?’). This naïve question dominates “Die Steuer-Erklärung”. What is this abstract, assumed thing? Why does it exist? To answer this question, hannsjana presents us with the show’s conceit: tonight, we will fill out our own tax declaration, but the normal calendar year will be the duration of this show.

The show settles into a swashbuckling musical adventure through the tax system, touching on number-crunching business presentations, heavy metal songs about finding your ‘Tax Paradise’ (Steuerparadies), and protest-proposals for a heavy progressive income tax.

“Die Steuer-Erklärung” shows off the talents of hannsjana, whose casual, low-expectations style is infectious and effective. The premise of the show packages their research well, wandering through a variety of performance styles (songs composed by Laura Besch feature lines like “Ich bin hier nicht allein / Elster-Online!”) and phenomena of the magical tax system. These are occasionally educational (Did you know that many Berlin companies have a post-box in Brandenburg’s Zossen – a tax haven?). As the protagonists try to marry another theatre group to reduce their tax bill, and demonstrate to us their new “Low Performer Academy” Youtube channel (which offers tips on how to fail at business), we come to the conclusion of the work: a proposal to redirect profits from Sales Tax (die Mehrwertsteuer or MwSt.) to culture. The performance ends with a mock celebration: “Hiermit erklären wir Ihnen die Steuer!” (“We hereby declare you all: the Tax!”).

One might wonder what can actually change from the intersection of “Die Steuer-Erklärung” with the actually existing tax system. Some of the swipes at other theatres such as Friedrichstadt-Palast seem the most effective — entanglements between the art world and big business and profit motive can be surprisingly vast. “Die Steuer-Erklärung” only scratches the surface of this entanglement, offering fairly populist solutions to the violences of the tax system. Yet it’s scope is deliberately wide, and it remains one of the only times you will see a subject which does so much to define the conditions of stage work today.

”Die Steuer-Erklärung” by hannsjana was shown at Sophiensæle on 22-25 November 2022.