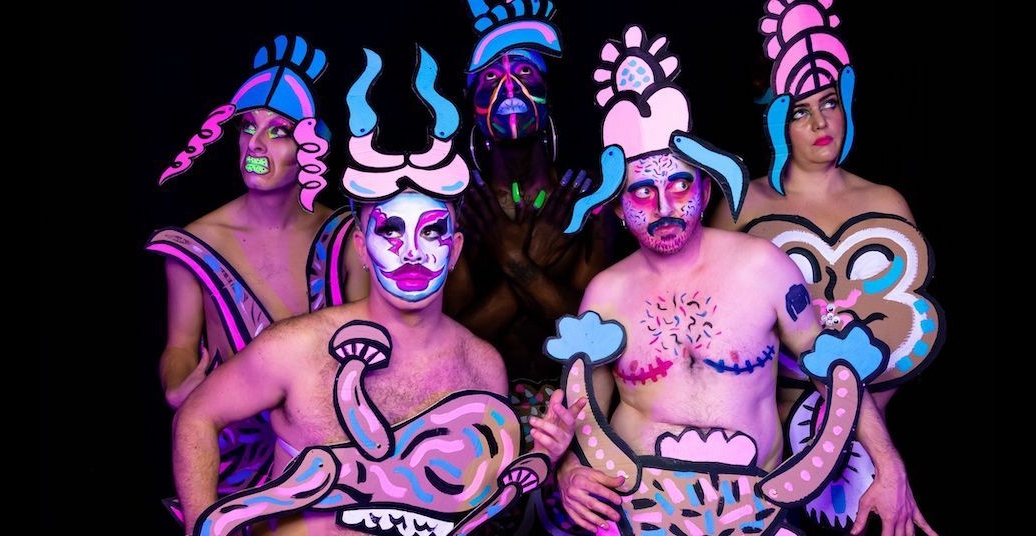 Tomi Paasonen’s “Pas de Q”, which takes place from 1-4 December 2022 at Sophiensæle, is a radical performance of community that gives the impression that drag and classical ballet have always been meant for one other.

When the weather app shows “☀️ 0 h” not just for today, but for the whole week, it’s a sign that real winter has begun. You can wrap yourself up against the waves of cold, but endless gray, day after day, is bound to get to you. Keeping all our neurotransmitters in working order for the next few months will require doses of St. John’s wort, face-bathing sessions with UV light — or performances such as “Pas de Q”. The new piece bychoreographer Tomi Paasonen is more than just a 70-minute serotonin glitch in Berlin’s annual depression season, but the temporary realization of a polychromatic parallel universe under queer rule in which discrimination is nothing but a ghost story, a thing of the past.

“Personally, I think we live in a time that doesn’t need art to confront, shock, or uncover the next unaddressed problem or catastrophe. I’m overwhelmed by these kinds of disturbances all the time in my daily life. […] Above all, I need something I can believe in, I need some goddamn comfort, and I want to celebrate that I and my community are still here,” writes Tomi Paasonen about his latest piece. In the case of Paasonen, who calls Berlin’s drag community (among other places) home, the rejection of an understanding of art as a tool for critically reflecting on society is all too understandable. The result is a party that celebrates the existence of marginalized bodies and identities whose wholeness the monochrome everyday life of the city constantly threatens. “Pas de Q” is a synthesis of virtuoso ballet and drag performances, dazzling costumes, a psychedelic stage design, fluorescent lighting design, electronic and classical music that alternately fuse together and split apart, live painting and moderation, and autobiographical narratives. All participants and components of the piece are organized in a radically non-hierarchical way: Each member of the cast (Kai Braithwaite, Joel Small / Reflektra, Llewellyn Mnguni, Leonardo Mancuso, Ixa, Rory Midhani, Anne Marine Fidler / Poppy Cox, Colin Comfort / Gieza Poke, Bryan Schall / Nana Schewitz) is also a performer in their own right and has at least one solo moment in the course of the evening. Everyone and everything shines brightly, but without relegating other people and other things to the shadows. Is this perhaps a definition of a social utopia?

Parts of Paasonen’s own biography are also reflected in this wealth of different identities, movements, stories, sounds, and colours, so multifaceted that it is almost immeasurable. He has designed almost seventy works in his past thirty years as a choreographer, cutting across various artistic contexts, dance styles, communities, and professional roles. All of these varied stages of his career have been archived as part of his lifework-solo “Retrospectrum — 5 solos for 5 decades” and can be viewed on his website, so if you like, you can take in the evidence of Paasonen’s exuberant oeuvre with your own eyes. His latest work is less an addition to this inventory than it is a new chapter which weds the two most important actors in Paasonen’s artistic career: The piece celebrates the marriage of drag and classical ballet, and “Pas de Q” makes them look like a power couple long destined for one another.

Shortly before the performance moves into its third and final act, a ball in which the dancers compete against each other, one performer speaks of all the “stinky cellars of Berlin” in which they have hosted drag shows for over a decade, and the improbability of suddenly finding themselves on a theatrical stage after all these years. “I built this galaxy with my own hands.” And then they shout: “The day will come when queers will take over the world — no, the whole universe!” It is a victory cry for their own community, a blessing for the need to survive, the confidence, and the willingness to work that are necessary to build such a galaxy — and at the same time a motivational speech against the pessimism and bitterness that often go hand in hand with the unfulfilled desire for queer community. Wrapped in a protective cloak of gratitude and admiration, I head home through the cold wind. The forecasts of the weather app are unchanged, but if you looked at my confidence radar, you would see it now predicts “☂️ 100%”.