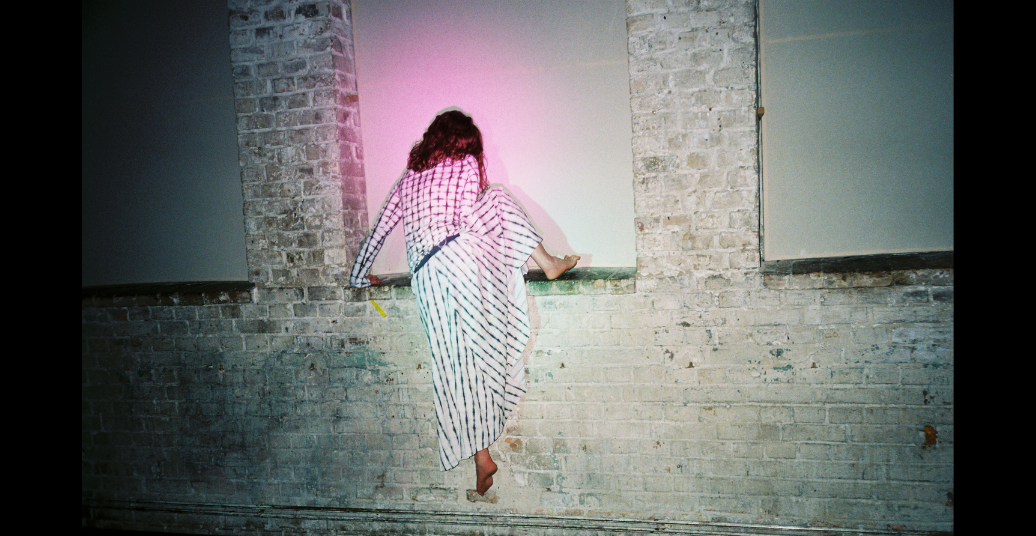 Team Volume & guests present a re-mix of dreams about freedom and love in “Degrees of Freedom”, which premiered at DOCK 11 from 7 to 10 April 2022.

I carve my way through a gathering of school-aged teenagers under the arches of DOCK 11. Some of them are chatting together, many have airpods in their ears even as they huddle together. I see a group near me take a ‘selfie’. Every Berlin venue seems to attract its own particular kind of audience, but, even so, I am surprised by this young turnout for “Degrees of Freedom” by Team Volume & guests. My co-audience members are a clue about what is to come during the performance — a youthful anarchy of stage traditions and performance-making, and a cacophony of ruminations on love and freedom.

“Degrees of Freedom” foregrounds the ‘backend’ production work of each of the artists and challenges aspects of the stage scenography. For instance, the performance space is bare and yet nothing is neatly tucked away. The computer, cables, and controllers for the music and lights are in plain sight along the side of the stage. Heavy, velvet sheened curtains — atypical for a blackbox venue — are drawn to frame the performance space. The two ropes that operate the curtains hang down from the ceiling to waist level in the middle of the stage, but not with any precision of symmetry.

At one point during the show, light designer Asier Solana plays with the lighting in various parts of the performance stage. As the technical director at DOCK 11, this is a space he knows intimately. Rather than working from the hidden confines of a lighting desk behind the audience seats, we see him in action on the performance floor. It is a significant moment for me in this performance. Without the self-aware poise of an actor or dancer on stage, Solana moves with a carefree individuality, apparently driven only by the purpose of his task as he puts his knowledge into action. Using light controllers on his phone, he changes the colours here, tweaks the intensity there, modulates patterns in the more and less brightly lit spaces as if this were an act of love towards the stage. He moves the two performers around on the stage to suit his light-work, rather than providing them with light to accentuate and follow their movements. Solana’s choices produce a riot of colours that clash and harmonise to change the mood in the space. Red washes, green beams, purple profiles, and even darkness overrule the common theatre aesthetic of warm yellow light.

The format of the performance reminds me somewhat of short video-based social media platforms such as TikTok. Each swipe of the finger offers a new vignette in a different format and from a different place, context, and theme. One cannot predict or control what may come up next as one scrolls into an endless abyss of digital content. Similarly, “Degrees of Freedom” presents a stream of snapshots in movement, light, speech, and sound. Each consecutive moving tableau tangentially approaches ideas of freedom, encounter, collective bonds, love, and loneliness. We see glimpses of the work of Team Volume’s members (and that of their artist friends who have joined them for this project) intervening and punctuating each other’s ‘content’.

The short dives that each part of the show offers make me think of how the path to freedom and love is full of distractions. Digitalisation delivers us world news, Tinder dates, and Wordle challenges with seeming ease — but it is also a representation of reality, loaded with filters and frames that offer us a simulacrum, an unsatisfactory, or tinted imitation of the real. In “Degrees of Freedom”, when two of the performers engage in a long passionate kiss, we see Therese Witt (costume and video) framing them in her phone camera. The image she captures is then projected onto the rear wall. Within her moving camera frame, sometimes we see their tilted faces kissing, and in other moments, hands embracing one another’s waists. This manipulation of the camera frame creates a surreal moment for me when the representative image is more alluring to the eye that the real event. Another segment of the performance also echoes this notion. Even as the performers are crossing each other’s paths, standing close together, their bodies grazing one another, or even leaning on one another, they still each appear to be locked in their own private world. They each hold a mobile phone and the flow and jerks of their hands are in unison with Jacob Stoy’s electronic score. But not once do their eyes meet. Instead, they are glued to their phone screens.

Johanna Strauß-Lemke’s choreography, a bulldozing monologue by actor Tilman Strauß, fragments of poetic text, Teresa Monfared’s stage design, and elements of light and sound all appear to be commentaries on freedom through different registers. The tongue-in-cheek anarchy and rupture in hierarchies of form that “Degrees of Freedom” explores bring with thema sense of chance, risk, and supposed imperfection — and alongside that a possibility of newness in every performance. In its unpredictable social-media style content, the performance surprises me by defying clear beginnings and ends, and even notions of completion within each segment of ‘content’. Perhaps it is this that leaves me feeling unwound at the end of the hour, unable to find a root within the performance.

This is also how I feel after every descent into the rabbit-hole of YouTube. A friend of mine in India paid for my YouTube Premium subscription and, for a while, I felt smug about my ability to enjoy all that ad-free content. I thought I had hacked the system. Now, however, I wonder if it is I who have been hacked by the system. Am I truly free or does the screen bind me?