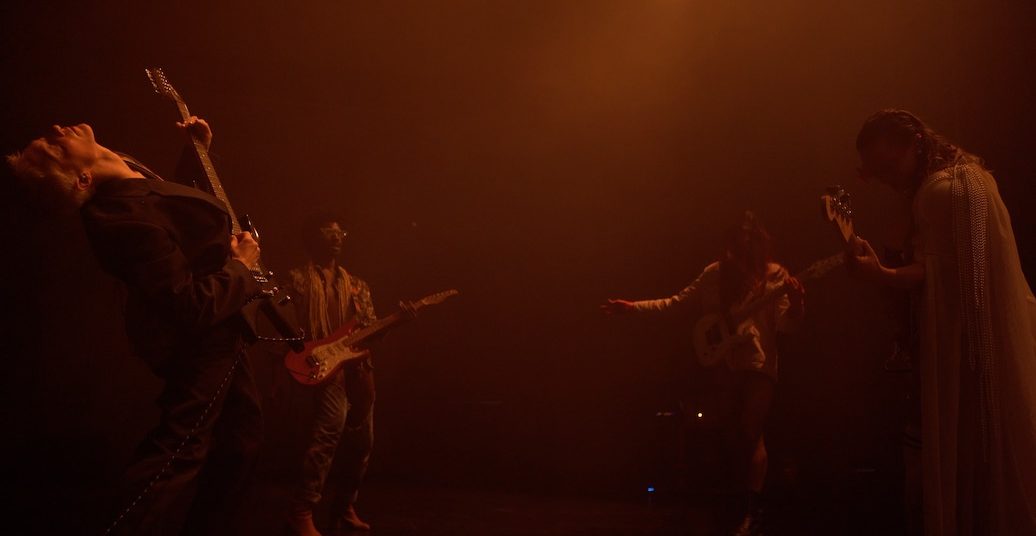 Showing as part of the online programme of Tanztage Berlin 2022, Layton Lachman and Samuel Hertz’s sonically-charged “DOOM (The Movie)” creates a world of catastrophe and creation. Parvathi Ramanathan steps into this world in a daze of delirious illness and imagination.

These words have been strung together through sleepless hallucinations and echoing dreams. I wake up now and then, singing a hymn harmonising with millions of bodies around the Earth. My fevered mind is robbed of spirit and fed by visions from a midnight performance and a ritual at dawn. Both of them raise a glass to toast an impending blissful apocalypse. I revel in it and anoint myself with this sweet Madeira wine.

At the stroke of midnight, when a small piece of the moon is yet to grow back, I begin to watch “DOOM (The Movie)”. It invites me into a dark warehouse offset by neon lights and rising fog. A sensual metallic melody reverberates all around. My eyes are met by four bodies that move slowly, poised as if gathering potential energy for the leap to come. Their faces are frozen in savage leers. When the music drops, they heave their shoulders low and forge ahead, thumping their feet in unison to each industrial riff of the guitar. Their head-banging pulsates down through their bodies and flows into the earth with every step. They knit their arms together and move with a ferocity, as if gripped by the quest for salvation. The shadows of this reverie tears into the orange hues of a Matisse painting. The one called ‘Dance’.

My mother speaks to me from the next room, measuring a distance of three dogs or a pony away from me. Her voice reaches me as a whisper in my ear: “Your agony shall travel with the celestial bodies. This fever will peak with every sunrise, and it will descend with the cool of the night”.

The crow at my window flies up and demands the scorching sun to remain there for a while. It is through the gaze of this circling crow that I watch this dance of doom and resurrection.

The crow glides soundlessly following the performer in ripped denim pants who rides a bicycle around the darkened warehouse, gliding with ease, as if this apocalypse were an excursion across a grassy, sun-lit meadow. To the company of the haunting notes from a Viola da Gamba, my crow pursues the bicycle in its calm meditative anticipation for the end.

The four beings form a circle. They look at one another with kind acknowledgement and tenderly lay their hands upon each other’s backs. I notice especially the hands of the one in the oversized black suit as they stroke their neighbour’s back. The crow attempts to pluck at those tendril fingers. Just then, the four backs arch and heads tilt upwards. Together they let out a deep, primordial howl. Their high pitched screams are stripped of fear, horror, anguish, or joy — dissonant voices devoid of emotion — and yet this act of howling seems to nourish them. The crow flaps its wings and peers into their mouths, seeking the entire cosmos in the folds of their jaws.

My head throbs. Pain sears the back of my eyes. With fingers that may as well belong to another body, I trace the pulsating veins pushing at my forehead. Sometime in the last few nights, a glistening worm entered my ear canal and nestled itself into my head. Now it feeds itself on the juices of my brain. The worm will soon lay eggs. I long for the tender hands of the one in the black suit to caress me, and sweetly pinch the arteries that run across my temples.

Two bodies are now chained together, with a clanging length of twisted metal between their hips. One yanks, pulling the other along. They move together in unexpected abandon, holding each other in joyful suspension with the support of the chain. The chain becomes a tool of sensual play and power. They roll, leap and pounce together, brandishing the dust beneath their feet in the face of catastrophe. They pull out the worm from my head and twist it around their metal chain. I am dragged along behind them.

My grandmother tells me the story of how the Hindu deity Lord Nataraja destroys the Universe while simultaneously dancing it into being. In one arm he carries the flame that atrophies all existence. With each spark, the earth parts, reduced to nothingness. His matted hair drums against his blue chest as he leaps to the beat of the small two-headed-drum that he holds aloft in another hand. With every rhythmic beat, life emerges.

The crow returns to the window and describes the morning ritual that happened without me, how they bathed Nataraja with water, milk, turmeric, honey, and ash. The four dancers and I listen to the crow’s tale as it snuffs out our eyes. Now we can see everything. We accept it and embrace it. I sit up and call out into the room: “Are we mourning? Shall we celebrate?”

“DOOM (The Movie)” by Layton Lachman & Samuel Hertz can be viewed as video on demand (duration: 40 minutes) in the online program of Tanztage Berlin 2022 until 22 January 2022.