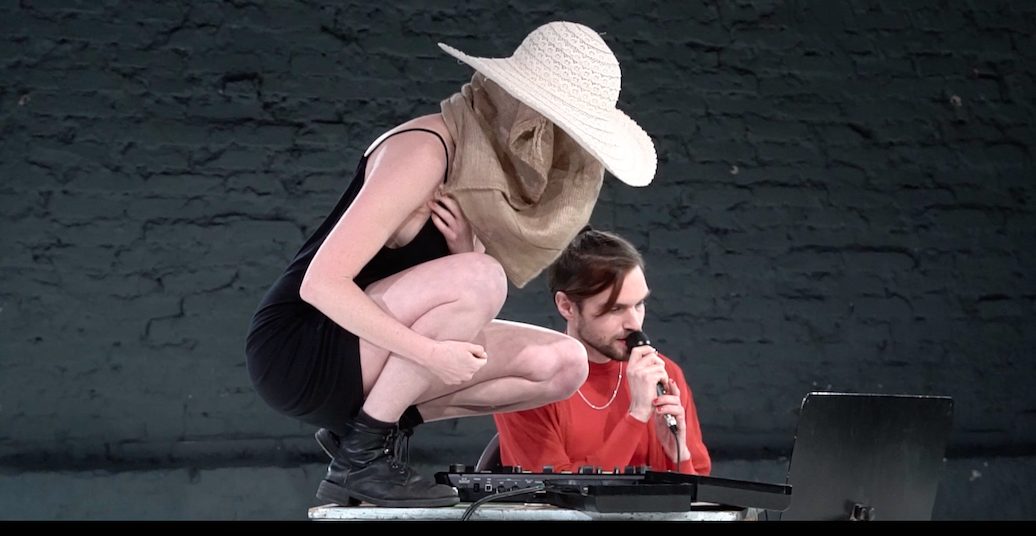 In heteronormative families, domestic violence structures are often reproduced across generations until there is a successful breakout. Rachael Mauney and Telmo Branco chronicle such an escape in the premiere of “Matrilineal” on 21 January 2022 at AckerStadtPalast.

White flooring fills the ground level stage space. In the center is an ensemble consisting of a table, chair, and music stand. The pointy metal edges of the table form an elongated cuboid, framing it. On the tabletop is a box with a microphone and a small synthesizer. An empty glass bottle sits at the edge. Behind the table is an upholstered chair and right next to it the wooden stand. The light in the audience is dimmed and a beam of light appears stage center as Telmo Branco walks on stage in a red gown, takes a seat on the chair, and begins to speak into the microphone. To the left of the table is Rachael Mauney in a black strap dress, which covers just one breast.

In a soft voice, Branco talks about the grandmother, who rolls down into an abyss as an ever heavier stone. Her high speed the result of the violence accumulating in her body, like in a container: the body is a container of its violence. When the grandmother’s violent husband dies, she is at first relieved. However, she later glorifies the deceased and romanticizes the memories of their marriage.

Branco strikes the glass bottle with a stick and loops the clang and the voice with the synthesizer. A shrill, roaring sound emanates from the loudspeakers. Rachael Mauney jiggles their bare left breast with their right hand, beats on their chest, lashes out and kicks, crouches, looks up with wide open eyes. Branco talks about children whose living environments were dominated by violent men, the patriarchs.

Mauney stands next to the table, places a jute bag over their head, then covers it with a floppy white hat. Mauney then strips off the dress, which falls to the floor. There is a history of women in my family. Mauney stands naked on the table and screams this sentence over and over. Adding that the recurrence of domestic violence spreads like a  disease, becomes an identity that ends in fear and surrender. But Mauney no longer wants to surrender and steps down from the table: No longer surrender. Branco repeats the sentence and adds, that we must combat the disease and take a stand. Branco serves as Mauney’s voice, tells Mauney’s story.

Together, Branco and Mauney tell the story of Mauney’s mother, who like their grandmother had a romanticized image of marriage. She was afraid of perceived enemies, although her biggest enemy was the violent husband who slept next to her in bed. While Branco sings, Mauney continues beating their body, kneeling, jiggling their breast, stretching their legs. The lolling motions remind me of the habitualized seduction rituals that speak to the expectation of the male gaze. Mauney screams. The screaming mixes with the loud loops coming from the loudspeakers. I carry on. Mauney, now lying flat on the floor, sets aside the hat and jute bag. Their face is flushed from the rapid movements, screaming, and stifling air under the bag.

The light is once again pointed at the table where Telmo Branco sings: I’m the one who crawls through the fire. Rachael Mauney dresses in the shadows, dark pants and a silver shirt. The bag and hat lie like a cast off shroud on the floor. Mauney says into the microphone that the weight of their mother and grandmother weighs on their own shoulders. That the violence in the lives of these wives pervades the lives of all three, perhaps even the lives of the previous 30 or 300 generations. They passed it down to their offspring. But Rachael Mauney does not want to normalize this condition. Mauney’s body will not bend to patriarchal rule.

Telmo Branco stands up, leaving the spot for Rachael Mauney, and sits in the dark in front of the audience, with a chair, a sheet of paper in their hands, and a view to the stage. The narrative of the performance now turns into an interview. Branco interviews Mauney, asking questions about the previous statement: To whom where you talking to? Mauney answers the questions about their dysfunctional family and the women who conformed to these structures. Mauney explains that they were always nonconformist and queer. Queerness, hope, and the idea of loving yourself and other people have helped Mauney take good care of themselves, be cared for by others, and not become like the women in their birth family.

At the end, Telmo Branco sits on the chair and Mauney joins them. They hug. I’m the one who crawls through the fire, through desire, I’m the one burning, in hopeful riot. Their bodies quiver.

In “Matrilineal”, Rachael Mauney and Telmo Branco devote themselves to a delicate issue. Delicate because domestic violence affects so many families and so many people have to remain silent about it, or think they have to remain silent out of fear, shame, or the powerlessness that arises from the daily balance between conforming and financial and emotional dependencies. Violence against women and femicide often occur in (marital) relationships and within families. Since Branco and Mauney take turns relating the stories of the mother and grandmother and the descriptions contain few details, the trauma retains a universal validity. This violent pattern of the patriarchal structure can be seen in many dysfunctional families – I myself come from such a family.

Matrilineality means that family descent is traced along the female line. The interpretation of the term conveyed by Rachael Mauney and Telmo Branco refers to an “inheritance” of domestic violence-shaped living conditions through the maternal line. Domestic violence, emanating from a life partner or father, often extends across several generations of those identifying as women. It is supported by the persistence of patriarchal power. And thus women from consecutive generations often find themselves in violence relationships, their situations “inherited”. The looping, the repetition of sounds and spoken words, serves as an analogy highlighting the reproduction of domestic violence structures, which is often romanticized and glorified in hindsight in order to escape the pain of the memories and be able to bear the dependencies.

But this silence not only hurts the ears. The loop has to stop. Rachael Mauney is not conforming, not letting their own body become a projection and a target. Rachael Mauney is speaking about the trauma, resisting and breaking free. Through hope, love, and queerness, Mauney and Branco conceive of a resilient and healing counter-concept to the omnipresent heteronormative and patriarchal family structures. They give this concept to their audience, congregated this evening in AckerStadtPalast, to take with them. Because the political, social, and cultural structures that perpetuate patriarchal power and rape culture must be changed together. We’re the ones who crawl through the fire.

The Violence Against Women Support Hotline from the Federal Office of Family Affairs and Civil Society Functions (BAFzA):  https://www.hilfetelefon.de/en/das-hilfetelefon/beratung/telefon-beratung.html

Anonymous counseling and information from the WEISSER RING: https://weisser-ring.de/haeuslichegewalt