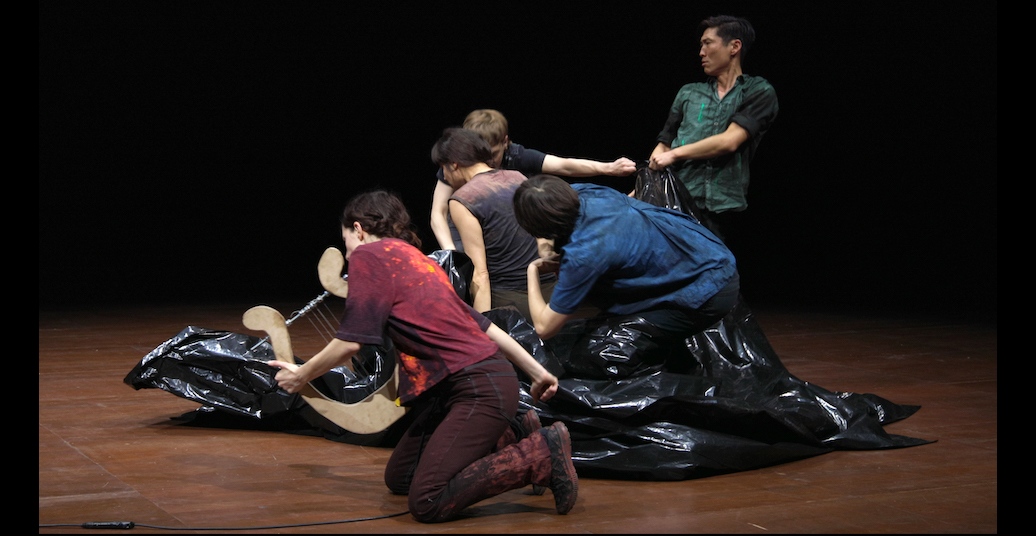 In Sergiu Matis’ “UNREST”, shown from 02 – 05 November 2022 as part of the FEMINIST FUTURES FESTIVAL from Tanzfabrik Berlin, ancient myths resonate through a cavernous industrial space, and are taken up as a material to question both the nature and the future of humanity.

In the huge vault-like rooms of Monopol, a former Reinickendorf distillery recently converted into an arts space, dusty stone structures rise up from the ground in symmetrical patterns. It looks like a cross between an archaeological excavation site and the temple of an alien civilisation. A fitting location then for a work which combines ancient Greek, Sumerian and Roman legends with uncomfortable questions around humanity’s future.

Lisa Densem, Manon Parent, Maria Walser, Martin Hansen and Moo Kim recount the epic tales of mortals and deities, sometimes chanting or singing, accompanying themselves on electric lyres made by Emma Juliard. The text is often dense, flitting between the poetic and the prosaic but, as stories of floods, fires and deforestation return again and again, the shadow of environmental disaster looms large. There is something paradoxical about the performers’ shifting movement as they speak, seeming to be gestural yet abstract, hesitant yet sure. The sight of them set small against a huge expanse of crumbling brickwork and metal girders, telling stories of humans at the whim of capricious gods, serves as a constant reminder of the fragile resilience of the human body.

As the myths echo through the industrial space, I am reminded of the Centrale Montemartini in Rome, a museum which displays ancient classical sculptures in a former power plant. The juxtaposition of classical and industrial, two eras often understood as defining moments in the development of Western civilisations, makes me search for meaningful threads running between the two. A general shift from attempting to understand the world around us, towards a desire to shape and exploit it perhaps? Although not directly invoked, the twin spectres of globalised capitalism and colonialism are ever-present.

At one point, carpets, enormous black plastic trash bags and rolls of artificial grass are laid out across the stone structures, and the recognisably human debris seems to suddenly shrink the halls of Mount Olympus. The performers’ voices then swell into a furious choir, amplified by the deafening, apocalyptic sound design, and the work once again expands to match the size of both the venue and the subject matter. As the sound drops, and we are offered cups of tea, Parent delivers a poignant monologue embodying Earth lamenting her destruction, and the enormity of the climate crisis is concentrated into a single, plaintive voice. This constant warping of scale has a destabilising effect, refusing to fully commit to either hubris or humiliation, hope or despair – and ultimately puts its faith in neither gods nor men. It is complex, contradictory and at times overwhelming. Not unlike how it feels to be an individual in the face of a catastrophe of global proportions.

The work ends with the performers sitting amongst us as though around a campfire, telling stories of female resistance to ecological exploitation; many long-forgotten, ignored, or only recently recognised. These include Eunice Newton Foote, the first scientist to theorise that higher carbon dioxide levels would lead to a warmer planet, and Françoise d’Eaubonne, considered the founder of ecofeminism. As a contrast to the tales of male heroism mythologised for millennia, it seems necessary to bring in these lost voices, and silenced narratives. After nearly two hours of dynamic performance, however, these unadorned stories unfortunately feel like an addendum. I find myself wondering if there are ways to give these voices the same artistic attention as the heroic legends, without the urgent relevance of the stories getting lost. Perhaps that is something for future generations of myth-interpreters. The question remains, as to what sort of future we will leave for them.

The performance “UNREST” by Sergiu Matis was shown from 02 – 05 November 2022 at Monopol as part of the FEMINIST FUTURES FESTIVAL from Tanzfabrik Berlin.