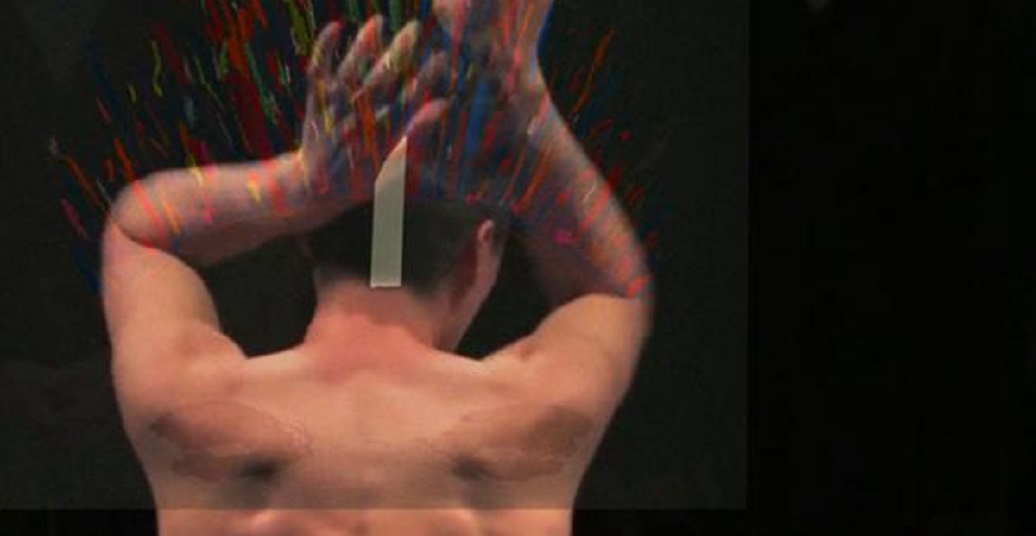 NAH DRAN, ada Studio’s long-running performance series, is a space for experimentation. The format features multiple works in progress and, in a true spirit of openness, encourages emerging artists to take the plunge and bring their ideas to the stage.

In a world in which we are constantly online and increasingly on the brink of information overload, Clara Birnbaum Pantzerhielm offers a refreshing counterpoint. “SWIM (part 2)” is a temporary slo-mo sanctuary: a fluorescent blanket, soft and squidgy, delineates a rectangle on the floor while a female body crawls, slinky and catlike, along its edges. Her movement is restrained and controlled, while simultaneously juicy and luxurious. The yellow glow from the fabric dances on her skinas she allows her sense of touch to guide her actions. She dares to close her eyes. She dares to be vulnerable. As I watch her, I wonder how her meditative mind state is affecting the people watching her. She gradually stacks her spine, coming up to standing, her arms swinging at her sides. She seems to be in a gentle kind of trance – but can she extend this feeling to her audience?

For the second piece of the evening, “Kopfschmuck”, Camille Chapon dresses the room in a variety of oddly matched objects: a dinner jacket, splattered in paint, is poised on three stilts; another dinner jacket balances on the floor of its own accord; three toys spill from an overflowing rucksack and are then carefully laid out at the front of the stage. Chapon appears to be a hybrid of the strangest kind. Dressed as a magician, he improvises like a contemporary dancer, but with the cheek of a cabaret performer. He moves slowly, tense and alert, with his back to the audience. Without warning, he spins around, shooting an imaginary arrow into the auditorium – bullseye! Caught by surprise, the audience inhales, sharply. From leaping to safety in a high-vis suit to stripping down to his bare torso and transforming into an animal, he is wildly unpredictable. I feel somewhat dazed, and I ask myself – is there an inner logic to his shapeshifting?

The improvisation “Doing things in front of the others”, conceived by Dorota Michalak, organically flows into action. One performer sits on a chair at the front of the stage, playing a tambourine with almost imperceptible movements. It is as if the instrument is making sounds by itself. The other performer is poised at a desk, drawing with black and red pens, the results of which are instantly projected onto the back wall. The third performer is silhouetted against the backdrop, her movements amplified by her shadow. Each in tune with the present moment, the three performers appear to be free to act on their impulses, focussing on initiations rather than final destinations. Taking an admirable, compositional risk, they enter a performative state of heightened reception, in which interesting coincidences occur. But the relationship between the performers and their respective disciplines is yet undefined. I wonder, what would happen if they met each other’s eyes?