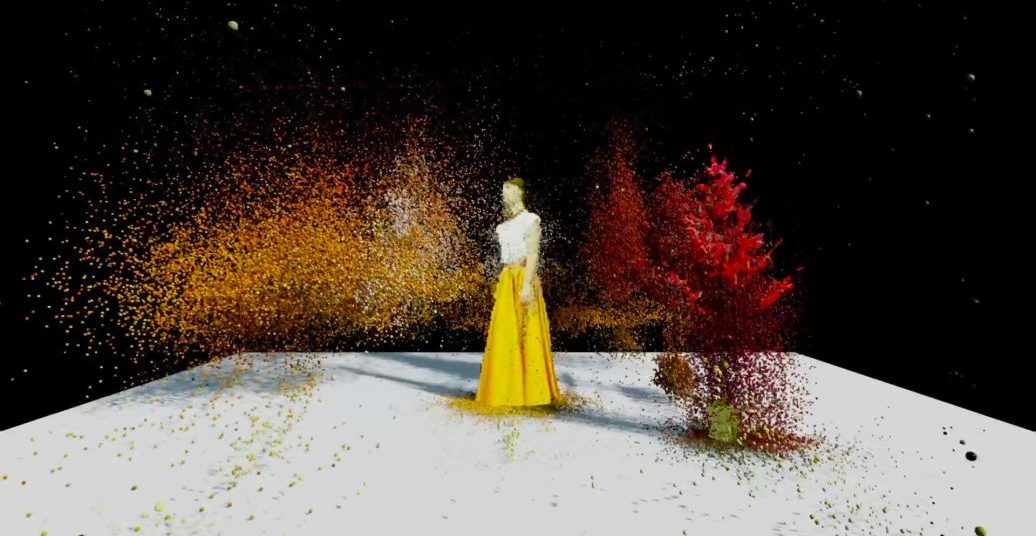 On 26 November 2021, Irina Demina streamed her performance “Perpetual Myth” from the basement of DOCK 11 as a real-time event in digital space during which she nimble-footedly took us into the complex and fascinating world of motion capture.

One day before the online premiere of “Perpetual Myth”, Irinia Demina, this year’s Pina Bausch Fellowship scholar, posted a short video on her Instagram account in which she answers content-related questions about her new work. From the video, we learn, on the one hand, that the initial impulse for the virtual performance came from lockdown-induced reflections on society and individuality. On the other hand, the choreographer explains that her desire to also use digital stages can definitely be reconciled with her long and already established interest in folk dances. She describes her new work as time travel of sorts, since what Irina Demina wants to explore with the digital technologies of the future and share in real-time are historical folk dance traditions, including various round dances and their corresponding movements.

A motion capture process usually works with marker points on the body whose movements can be spatially captured and transferred to a digital figure. However, Irina Demina’s team used even more delicate technology for “Perpetual Myth”: the so-called Kinect, a motion control tool from the gaming world that relies on infrared radiation and reflection to display a three-dimensional image of the body and its real-time movement in space. A built-in camera simultaneously films the dancer. So what we see in the piece is not an Avatar-esque digital figure of her, but rather her normal filmed image as a sort of “cut out”, with contours that are somewhat blurred or jumpy in a way that is familiar from video games.

Changing between various worlds and spheres is characteristic for “Perpetual Myth”. For example, while we watch her via a live camera seated on a real chair between two little artificial red trees, the choreographer and dancer directly addresses us with an explanation of the real spatial situation at DOCK 11 and who else is on site with her. She invites us to close our eyes for a moment and situate ourselves in the space that we currently find ourselves viewing, to sense our own breath and let go of any tension in our body. What some may recognize as a warm-up and visualization technique from contemporary dance, leads us — initially by surprise and then consciously and deliberately via our own physical perception — into the digital world. And when we once again open our eyes, we see Irina Demina, now wearing a floor-length orange skirt, in a virtual space. This world through which she gingerly and repeatedly strides and dances in circles is initially just a black background with a white floor for spatial orientation. But thanks to the right software, this virtual space soon takes shapes and fills out in a fascinating manner.

The complex worlds and varying levels, digitally rendered or filmed, gradually erect themselves in the nearly one-hour streamed performance. They seamlessly intertwine so that the piece not only depicts time travel, but also seems to allow various worlds to merge. At first and for a long time, we see an unmoving image, which, next to the virtual figure of a person in the center, is a kind of orange cloud consisting of floating spherical particles on the left side.  To the right of the digital person, red particles appear to form or deconstruct a small red tree — depending on whether the movement of the particles is dispersing or converging. It is one of many comparable images that recurs later on in the piece, with Irina Demina as a dancer in motion.

These small round particles in the colors of Demina’s clothing freeze her captured image in a respective pose for a moment, like a pixelated still image. They leave it in space, only to dynamically disperse and dissolve in different directions. The many tiny spheres and their coordinated programming of dispersion or convergence become a choreographic level of their own and create a spherical world that draws poetic notions of floating in the expanses of the universe. What is also exciting is that the fleetingness of the dance movements becomes tangible through these transforming still images. As Irina Demina herself continues to move through the space, the still images of the particles momentarily become a shell or trace of the past. Through digital technology, a movement in space remains perceptible for longer and its dispersal can be controlled. Nevertheless, the dynamic dissolution of the form of these still images, which consist of many particles, once again elucidates, in a technically elaborate manner, the impermanence of the moment as well as of dance itself.

“Perpetual Myth” by Irina Demina was streamed as real time digital performance from DOCK 11, 26-28 November 2021. More information and a trailer of the performance can been found on the artist’s website under irinademina.com.