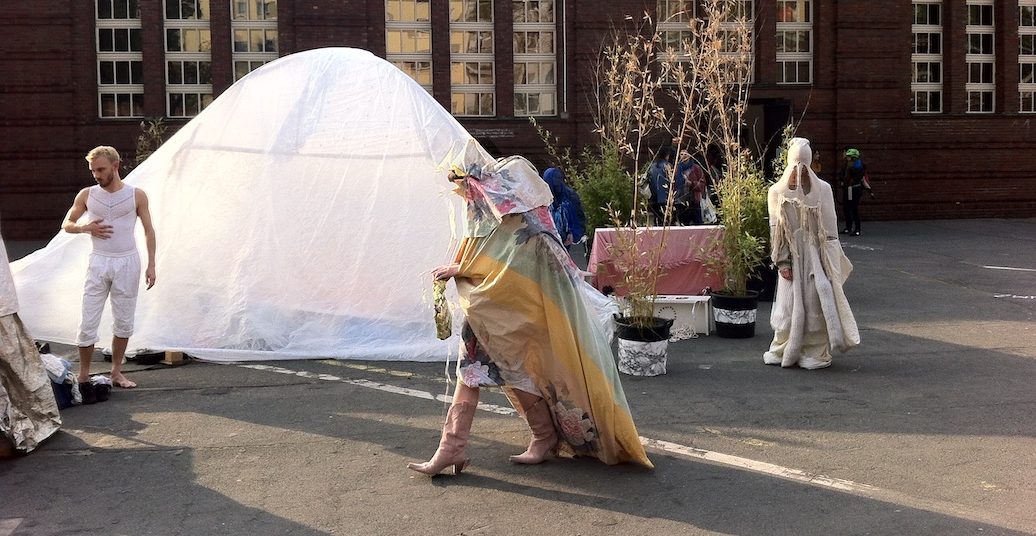 T.E.N.T. – A Cosmic Drift Mega Mini Festival took place at DOCK 11 from 11 to 14 November 2021. Of the ‘four evenings of evolving stories that share space and collide on a cosmic drift’, I attended two. I was rewarded with two beautiful and dazzling shows and a performance lottery in which I won a cosy and thought-provoking nap in a lace-made tent. T.E.N.T. Festival did not send me to a supernova or take me on an intergalactic trip (the bold promises made in the festival description), but instead made me reflect on the politics of care and softness, and on the necessity of supporting each other in our precarious and uncertain times.

T.E.N.T. Festival is devised and conceptualized by an eponymous collective of Berlin-based independent performance artists. Challenged by economic precarity and a lack of institutional support, they have put together an ecosystem which provides a collective frame for their varied artistic practices. This support is an obvious necessity in the Berlin independent dance scene and when living as an artist under constant financial struggles. But after attending two evenings of the festival, I understand that there are more than purely practical concerns uniting this unique artistic community.

Alistair Watts’s “The Ride” is the first show on the opening evening. I enter the theatre and quickly notice the relaxed and cheerful atmosphere. Many T.E.N.T. members are here and their excitement is palpable. Watts enters the stage clad in a lavish, fringed suede jacket, stands in front of a mirror and engages in a series of slow shoulder and head twists. I instantly feel a certain James Dean glamour in his swaying movements, smirky smile, and the way he mimics chewing gum. After his exuberant dance, rich with sudden jolts and twists and a quick costume change behind a lush beige curtain, the show takes an unexpected turn. Watts is now embodying another uncanny character. His crawling cautious movements, set to dramatic Hollywood-fuelled music and in a long black wig hiding his face, immediately remind me of “The Ring” with its creepy black-haired girl. The end of the show sees the performer swiftly return to his ‘cowboy’ character, playful and smiling under warm amber lights. Thanks to Watts’s tongue-in-cheek acting and fast pace, this short ‘ride’ from a western, to a horror movie, and back again, is smooth and exciting. Although his piece is, I thought, slightly too literal at times, Watts is delightfully witty in his exploration and subversion of the codes and cues of genre films. And, most importantly, I am not the only one wearing a beaming smile as I leave the theatre — everyone else is too.

After a short break and a cup of tea, I return to the theatre to attend Sharon Mercado Nogales and Kiana Rezvani’s “Earth Beings”. The stage is plunged in darkness. When the two performers, clad in dark worker coveralls, appear downstage, they slowly take hold of two sand bags and start pulling them across the stage, leaving sand trails behind them. The show moves forward to the roar of falling stones that soon morph into pulsating techno beats. After an enticing stomping sequence, abundant with side steps and club dance movements, the rhythm slows down. Mercado Nogales and Rezvani reach out to the sandbags and start shaking them vigorously. Sand and rocks tumble out onto the stage. As the rhythm quickens and the dancers turn to each other, their movements become synchronised — and all the more mesmerising. This final ritual is hypnotic and leaves me bedazzled. In the programme notes* I read that the artists share ‘a parallel geographical background,’ and both come from mountainous regions ‘where horizons have no form.’ Their unique approach to personal memory and the pure energy of the elements is beautiful and hard to forget.

I return to DOCK 11 on a gloomy Sunday afternoon knowing that I am in for a treat. T.E.N.T. and Club for Performance Art Gallery have devised an intriguing series of one-to-one experiences in the form of performance lottery. The idea was born during the lockdown and allowed performers to carry on with their artistic practices in times when only a few people could meet in public spaces.

I turn the cardboard fortune wheel hanging on the wall of the DOCK 11 courtyard and discover that I am to going to take part in Cathy Walsh’s “Spoon Talk”. I wait outside for a couple of minutes and notice a sort of a waiting room in which the performers are waiting for ‘their’ spectators. They giggle, hug each other, and share drinks. Caring and supportive vibes seep from this space. Walsh comes outside, smiling, and walks me in. We enter a big dance studio and head towards a small tent installed in the corner of the room, and sit down on a fluffy blanket. We smile at each other, and I feel my shyness melt under Walsh’s reassuring smile. She offers me tea and explains the concept: We will lie down and spoon for 40 minutes. We can talk, or remain silent, just breathe, and be together. Walsh asks me if she may put her right arm around my waist. I agree. First, I am a bit stiff, but the tension in my ribcage gradually dissipates and my ruffled spirits are put at ease. Walsh’s presence is delicate and we quickly start breathing in time. I do not want to talk. Sharing this time and space between alertness and comfort is already a performative act. The lace-covered tent turns into a shelter protecting me and Walsh from the lights and noises of the other performances. I doze for an indefinite period of time. When the alarm goes off, we talk about the concept of ‘radical softness’ coined by the queer artist Lora Mathis. According to Mathis, radical softness is a weapon and a form of resistance against patriarchal and neoliberal society. Walsh’s deep and soft somatic experience could also be interpreted as a form of resistance to the hectic pace of everyday life and stands in stark contrast to many other dance performances that often heedlessly play with the nerves of the audience.

Mellowed out by the generosity of this encounter, I walk out into the courtyard. I am curious about the other performances of the evening and start exploring. I peer down the staircase leading to the basement and discover a glowing static bicycle enveloped in mini LED lights. A big white tent has been set up across the yard, and, judging by the music and voices oozing from inside, there is another performance happening there. Caroline Neill Alexander, who is organising the raffle tonight, tells me that many of the one-to-one experiences take place outside DOCK 11, and that one of them even happens in the depths of an U-Bahn station. As we talk, I notice two people walking very slowly through the archway. Their steps are hardly perceptible, making me recall how difficult it was for me to slow down my frenzied pace when I participated in Anne Teresa de Keersmaeker’s happening “Slow Walk”. When I flick through the programme, reading about the other artists performing tonight, I come across Inky Lee’s name, who wrote about last year’s edition of T.E.N.T. for tanzschreiber (“Don’t Wait”, by Inky Lee, 24/02/2020). I remember reading her piece, in which she described that during a ‘performance auction’ she had bought a kiss from one of the T.E.N.T. artists and was very happy about her purchase. I find it funny that I went through a similarly intimate experience this year, the only difference being that the wheel made the choice for me.

I am still in a liminal space between relaxation and enthusiasm when I walk down Kastanienallee. While T.E.N.T. might be not the most grandiose Berlin dance event, its gentle atmosphere of support and care is unique. The dedication and devotion of these artists to their practices is palpable and contagious, and their skill outstanding. Most importantly, they channel these values of solidarity and softness to their audiences. Many thoughts are now buzzing in my head. I am dreaming of a future, in which “The Ride” and “Earth Beings” could be performed on bigger stages in front of hundreds of people, and in which their touring schedule would be full. I am also imagining a world in which “Spoon Talk” would be a common somatic practice offered to all festival goers whose nerves have been wrecked by yet another anxiety inducing show. I ponder the urgent need of slowing down, listening to each other, and becoming softer — but not at the cost of abandoning cosmic fun, lavish pleasures, and the ultimate joy of dancing.

Alongside the performances described in this text, the T.E.N.T. programme included “Wet Eyes” by Camila Malenchini and Marga Alfairao and Caroline Neill Alexander’s “Die Jungfräuliche Braut”.

* A pre-recorded version of “Earth Beings” premiered in June 2021 within the framework of “Nah Dran extended” performance series organised by ada Studio.