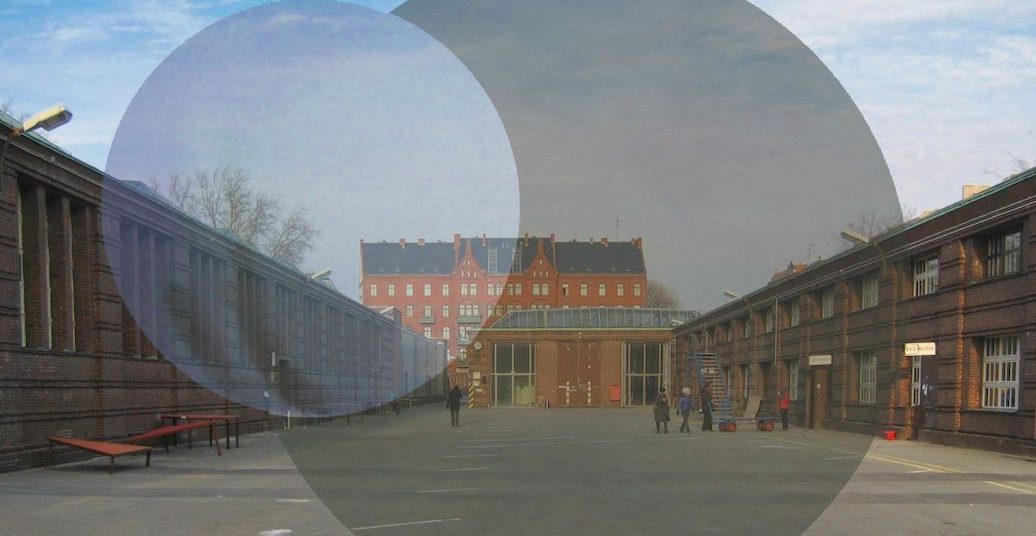 Following two years of pandemic-induced runarounds in the digital sphere, the A.PART Festival is returning to ada Studio and providing a stage for the young Berlin dance scene. On 6/7 and 13/14 May 2022, contemporary choreography by dance students and alumni were performed under the title “ONSTAGEPLEASE!”.

A yellow dance marley is laid out in studio 7 at Uferstudios in Berlin-Wedding, where ada Studio, founded in 2006, has housed a stage and production facility for contemporary dance since 2011. The color provides an appropriate setting for the solo performance “yellow light, pause” by Silja Tuovinen, who is opening this year’s  A.PART Festival. Dressed in beige overalls, she grapples with the stages of grief. With the help of sand and mops, as well as quick, automatic movements, she creates an overwhelmingly melancholic atmosphere, one that is intensified by the ambient music and her occasional stage exits.

The performance “ich sehe dich (I see you)” by Tabea Antonacci and Marie Elise Hufnagel, in which both dancers address sisterhood, or rather FLINTA*hood, follows. In their everyday color-coordinated clothing in pastel shades, they move in sync and then asynchronously throughout the studio, snuggling against each other and persevering in resting poses, throwing imaginary balls at each other and holding each other’s arms for balance. They take turns speaking, completing each other’s sentences, jumping throughout the room and rubbing their bodies against the wall. During their playful negotiation with embodied webs of relationships, they continuously refer to each other and also acknowledge the audience, looking us viewers in the eye.

The third performance, “common thread”, by Milica Tančić, deals with unexpected (verbal) communication. Tančić enters the stage in a white suit with a red ball of wool, which she encountered in her house as a finished object, on her head. She subsequently devises a game with the thread material, accompanied by somber, electronic string music, which, as a communication thread, simultaneously robs her of her speech until she tears the thread and sends us viewers off to intermission.

The film “Hypothetic Bodies“ by Simone Gisela Weber and Julia Keren Turbahn is the result of a collaboration with filmmaker Svenja Simone Schulte. Originally planned as a stage performance, the project, as a result of the pandemic, turned into a dance film that not only documents the performance, but also works with the split-screen editing technique and the use of close-ups to create an intimate space. In the independent video work, Weber, dressed in an athletic bodysuit and track pants, smashes bricks against each other, the dust spreading with the fragments on the blue floor. The dancer throws herself against the white tile wall, bruises cover her shoulders. Rhythmic strokes and the strokes of an electric guitar mingle with the clanging synth sounds and set the tempo for her movements.

Milena Sundari Nowak and Tatjana Mahlke explore their own privileges and societal power structures in “Ist das normal? (Is this normal?)” – with this open question, they navigate their way from private to collective performance. Using both culturally appropriated textiles and spoken words, they shed light on intersectional structures of inequality and possibilities for solidarity. Their dance elements, reminiscent of movement sequences from contact improvisation, also confront the perspectives of mutual support on a physical level.

Following the performance weekends (6/7 and 13/14 May 2022), the video recordings of programs 1 and 2 are available for four days on the Festivalblog. I watch the video documentation of the second part of the festival at home for scheduling reasons. However, an audience experience like the one I experienced at Uferstudios during the first part can hardly be matched by the online version. But I take advantage of the opportunity to switch back and forth, rewind and fast-forward through the sequences.

In the first performance of the second program, “My body’s wild life”, Maria Rutanen and Joséphine Auffray encounter each other in white pants and light brown shirts in a veldt created by the yellow marley and two houseplants. Auffray, lying on a fur coat, grasps a microphone. While her lips are moving the roar of a lion can be heard. A little while later, Rutanen and Auffray rock simultaneously and upright from left to right, their bare feet squeaking on the floor. As the light in ada Studio turns red, like the rosy horizon of a sunset, the two dancers throw on their fur coats and their movements converge as they respond to each other and maintain their points of contact in a desire to merge human and animal life.

Milla Toppi and Lauren Fitzgerald developed the piece “Easy” together. However, it is only performed by one of the two dancers. Lauren Fitzgerald enters the darkened stage In baggy purple sports pants and a light brown top. First, she opens the curtains, then she stands in front of the audience and looks at us. Soon thereafter, she opens a door and the sound of chirping birds fills the room. She opens a drawer between the tiles under the window and Percy Faith’s “Theme from a Summer Place” from 1956 resounds. The gentle string orchestra casts a dreamy film over the scenery as Fitzgerald spins around the room with an umbrella. She soon distances herself from her gentle movements, first spinning a white plastic chair around herself and then flinging it away. She leaves the room, hunched over and without music, escaping the brief dreamy moment.

Another houseplant makes its way into the studio for Clara Dünnebeil. Next to the plant, the dancer models a living room atmosphere with an ensemble consisting of a table, chair, clothing rack, and a picture frame, which displays a poster of the production “Der Wahnsinn hat Methode (There’s a Method to the Madness)” at the Schaubühne. Dünnebeil gives us “EinBlick (InSight)” into her routine, between the voids, procrastination, and exuberant drive. After lingering at the table for a while in black clothing, burying her head under her hair, and resting her head on her arms as if distraught, she dances with electronic music and moves throughout her room with the help of the rolling clothing rack.

Asya Ashman and Konstantin Koryagin create a gloomy atmosphere in “Krepost” (Fortress), with a cabinet-like set design. A cast iron tire with thorns lies on a narrow black column, an overturned cabinet with a mirror lies on the floor. Ashman wears black athletic shorts and a short T-shirt. Koryagin’s black clothing is embellished with the image of a skeleton, which appears to be sewn on with white fabric. The two dancers, accompanied by guitar and drums, interact with the furniture like the undead in a liminal space.

Finally, Jeanne Binet and Sofia Seta perform their piece “Canticles”, camouflaged in subdued earth tones. They begin back to back, supporting each other, and then move slowly and with staggered timing in staccato, adapting to the rhythm of the rattling, metallic music. Their movements seem rehearsed as they make their way through space and time. Announcements and prayers emanate from the loudspeakers, mobilizing them. Binet and Seta ready themselves and surrender to their dance in ecstasy.

The ten very different performances provide a glimpse into the diverse creations of the dance students and alumni working in Berlin. During the audience discussion, which takes place after the opening program on May 6, the dancers, together with the festival curators Julek Kreutzer and Diethild Meier, categorize the stage events and answer audience questions. They reflect on the themes that drive the dancers, how they reflect on their own life situations and the roles of their artistic, dance practices. However, they also address the hurdles that the dancers have had to contend with over the last few years. It becomes evident that platforms like the A.PART Festival are indispensable for creating awareness for the young Berlin dance scene – not least of all following two years of a pandemic, and in times of limited rehearsal space and scarce funding. Spaces for experimentation and acquiring experience should always be allowed to persist as an essential component of a creative scene. And as one such space, ada Studio is one of the few non-institutionalized places in Berlin and beyond that actively promotes young dance talent, not only by offering it a stage, but also by engaging in dialogue and facilitating the rehearsal process.

A.PART Festival for contemporary dance students and alumni 2022 ONSTAGEPLEASE!, curated Julek Kreutzer and Diethild Meier, brings together diverse perspectives on choreography and dance, by alumni and students from Berlin’s dance education programs: Tanzakademie balance 1, ETAGE – Berlin School of Performing Arts, the Berlin Dance Institute, the Inter-University Center of Dance (HZT) Berlin, and Tanzfabrik Berlin’s Dance Intensive program. Detailed information is available on the festivalblog. Program 2 can be seen in the videostream provided by ada Studio until 19 May 2022.