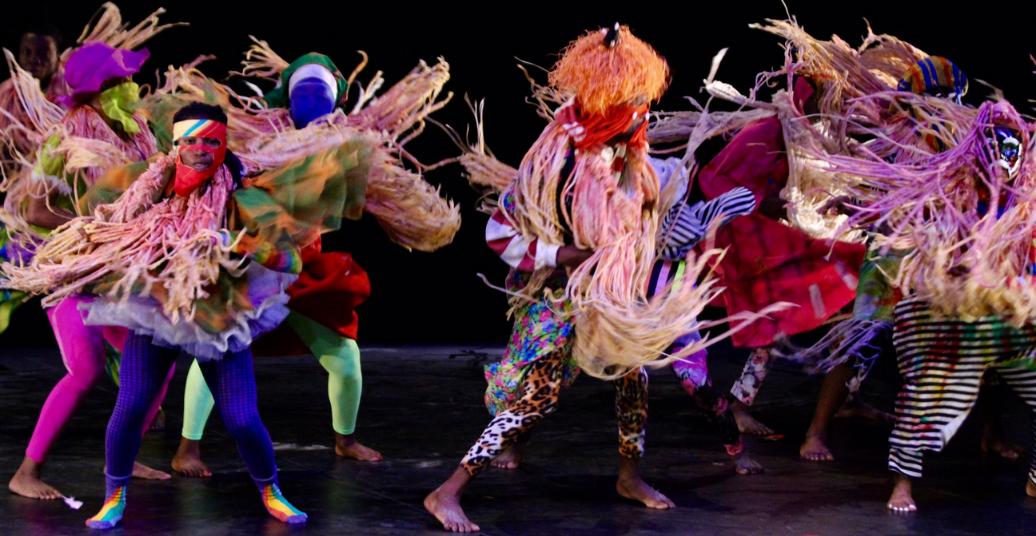 In “Re:INCARNATION”, The QDance Company from Lagos, Nigeria, celebrated their German premiere on 14 May at Potsdamer Tanztage 2022 with a joy so infectious that the audience couldn’t help but giggle, applaud, and, when the dancers returned for an encore, answer their call, “Oggy, oggy, oggy?” with “Oi, oi, oi!”. It was as if the Hans Otto Theater had been turned into a festival stage and a song and dance had been made about the Yorùbá belief system in the cycles of life — of birth, life, death, and rebirth — both literally and figuratively speaking.

“Re:INCARNATION” is, moreover, a song and a dance that was inspired not only by the choreographer, Qudus Onikeku’s, own ancestral roots in the Yorùbá people, but also by Lagos youth culture more generally, which, in his own words for the programme, ‘is deeply influenced by dances such as afro-beats, dancehall, hip-hop and funky house.’ The performance certainly felt to me like a medley of movement and music, but one that ultimately made the stages of life all the more exciting.

A multicoloured wardrobe of clothes hangs, limbless, at the back of the stage — waiting to be embodied. It makes for a motley cast of scarecrows. Up above on a screen, a text on how Ajosepo (collaboration) is not necessarily about shedding our differences, but rather working with them is visible. Then, from out of the wardrobe comes the unceremonious chitter-chatter of a changing room, as Onikeku’s troupe of dancers pull on their trousers, t-shirts, skirts, and shirts, not to mention their ceremonial headdresses. Fully clothed, they tramp across the stage in mundane, monotonous, movements, recalling all the things that humans do that make us, well, human. Now they’re eating some food, now they’re brushing their teeth, then bed. Now they’re hugging each other, now they’re having sex, then … A cry from inside the crowd ushers in the arrival of new life. A baby is born! The crowd rejoices.

A woman with pink braids as long as Rapunzel’s swings her hair back and forth, then round and round, until they’re circling her head like the rotary wings of a helicopter. Just when it seems she is about to take off, a T-shirt soars through the air and is snatched by another dancer, in a game of whoever-has-the-T-shirt-dances, apparently. For this is no chorus of synchronous dance sequences, but rather a gathering of Lagos youths, egging each other on and finding their own individual grooves in moves that somehow always outdo the last. A healthy helping of competition hangs moist in the air, as does the smell of fried plantains, as I am reminded of Notting Hill carnival in London, with all its colours, percussion, and camaraderie. And yet there is no sign of a parade in sight. Indeed, this is no carnival, but rather a festival in which everyone is dancing entirely for their own sake, celebrating, above all, their beloved Lagos life.

Until a bit of friendly banter turns bitter, that is, and Shakiti Bobos are swapped for fists. One man is singled out from the crowd. He’s writhing on the floor now, with one hand clutching at his wounds and the other casting wide for a helping hand. But the performers have turned cold, cruel even, stripping off their clothes and hoicking up insults to throw back down on him. Then, under a spotlight and with the soaring notes of Victor Ademofe’s trumpet now reaching heavenly heights, we see how helpless he is as he confronts death and the heap of rags he’s become.

Hunched over what look like walking sticks, two dancers trace the descent of ageing — at first unsteady on their feet, then shaking, and finally, as if they’re about to keel over, unable to hold up the weight of their own heads. They’ve regressed to being almost like babies again, trembling on the floor, barely able to lift their limbs. Death is on the doorstep. According to Yorùbá folk tales, death is often portrayed as an old, haggard man who carries a heavy club with which he despatches his victims. No one is spared, of course. Death is, after all, inevitable. Perhaps that is why Jacob Kehinde Olupona observes: “Not a day goes by when speakers of the Yoruba language do not make mention of death as both a phenomenon and a certainty.”

But, according to Yorùbá beliefs, rebirth is inevitable too. One of the dancers soon takes to her feet, spinning on the spot, swinging her pink braids round and round again, until they’re circling her head like the rotary wings of a helicopter. Circles certainly abound in “Re:INCARNATION”.

A lone female dancer wearing a tutu puffs up her tail feathers at the back of the stage like a bird of paradise. She is a sight to behold as she promenades on a diagonal, wafting her wings in slow motion and ruffling her breast feathers with the utmost belief, it seems, in her own beauty. Here, as in the rest of the piece, costume designer Wack Ng, whose necklaces (captured in the photograph) are as much a source of movement for the piece as the dancer’s own bodies, deserves a special mention. It is certainly a sight to see them worn by the whole cast, as they moved vibrantly in unison, feet flat on the floor, knees bent, bodies bouncing to the ever-buoyant beat.

Their vocal cords are, too, a source of movement. The dancers intermittently holler or howl, adding yet more syncopation to an already dissonant beat. Indeed, Onikeku’s troupe of dancers perform as much with their voice boxes as they do their buttocks — twerking included. Now their singing begins to resemble mantras as they close in on something unknown. It is as though they are willing something on with their voices, collectively beckoning it into being…

Then there’s one lone woman again, beneath a spotlight and in front of a microphone. She’s delivering a monologue that seems to me, above all, to be about the cyclic nature of life. It is a cycle which is determined by a person’s destiny or, indeed, that of a community’s or an entire nation — what goes around comes around, haven’t you heard? As she speaks, other members of the cast begin to slather her body with a thick, inky mud, until she is covered from head to toe in jet black soil. Then they turn to each other, slapping it on, until the entire cast is caked in mud. As I watch this image, I wonder if, as far as the Yorùbá belief system goes, being reborn in life is about coming back down to earth and, perhaps fundamentally, being one with the earth.

Death, then, is perhaps less a closed door at the end of life, and more of an opportunity to do it all over again — only with more connection to nature and to each other. And, as far as the dancers’ smiles were concerned, with more joy. The impression I was left with from QDance Company’s take on “Re:INCARNATION” was simple: Enjoy the ride.

“Re:INCARNATION” by The QDance Company was shown on 14 & 15 May 2022 at Hans Otto Theater in the frame of Potsdamer Tanztage. Potsdamer Tanztage 2022 – International Festival for Contemporary Dance is still running until 22 May 2022, find the full programme at fabrikpotsdam.de and as pdf here.