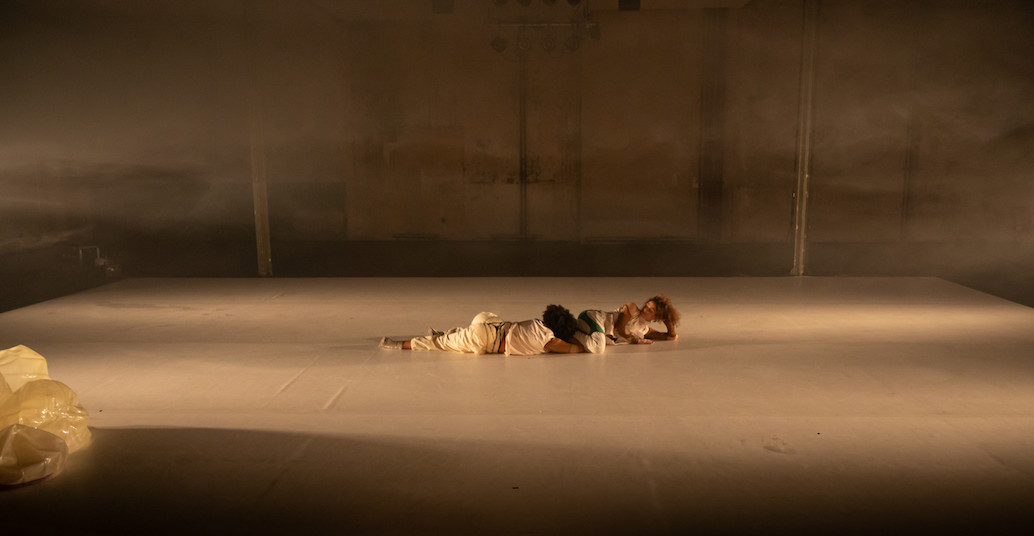 “Lounge” begins in haze. The audience enters with thick theatrical smoke in the air, two barely-perceptible figures lying languidly, approximately centre-stage. As the haze dissipates among soft blue light, mumbling voices on the soundtrack – relaxed to the point of unintelligibility – begin to appear and disappear in a kind of elusive echo. The female-identifying dancers, wearing relaxed white clothes mixed with some mesh touches (costumes: Nani Bazar) shift position absently, as though waking up from sleep or occupying some half-dormant state. The light (Thais Nepomuceno Veiga) shapes itself into a kind of cocoon, a protective shell from the pressures of the world, where this monument to rest can play out over the next 45 minutes.

At some point, one body begins to twitch, as the other watches – and we enter a playful space of voyeurism and display that defines “Lounge”. Working along lines of research that concern intimacy and sexuality, Marga Alfeirão and the collaborators (including dancer Mariana Benengue, with Myriam Lucas and Cajsa Godée on choreography), have created a kind of ode to human sexual exchange in its purest form, stripped somehow of expectation, refined to the pleasures of giving and receiving. As audience, we are only nominally present as the exchange takes place: A butt or lower back is isolated into a micro-twerk (Alfeirão calls this “invisible lap dance”) and presented to the other, who inevitably responds with a pleasurable, wistful smile. It’s a platform that continues through various formations and movements to the backing of Shaka Lion’s mix of pounding rhythms and sublime chorals – suggesting the erotic pulse ticking beneath the surface.

In exploring the positions in a spirit of openness and play, “Lounge” manages to straddle the line between explicit and gentle. At times, a dancer executes such a tiny, tender movement (a wobble, a shiver, a twitch of the finger, eventually a spit) that you wonder if it exists only in your hazy imagination – and yet, their dance partner often confirms it with a slight nod or other affirming acknowledgement. It’s a deep, internal picture of the erotic: two figures immersed in worlds that are at once separate, and yet carefully overlap, intruding on each other with sensual, warm suggestions.

Some careful dramaturgical interventions (dramaturgical support: Jette Büchsenschütz) round out the piece as it enters a third phase marked by blissful sublime and golden light – in particular, the full force of an audience light both punishes us gently for our voyeurism, and suddenly plummets the stage into a space of privacy. “Lounge” sits inside a niche but expanding movement towards relaxed and unimpressive performance styles that address the audience disengaged way, sometimes almost ignoring them. Perhaps born of a mix of slacker culture and other forms of resistance to intense pressures of capitalism, endless cycles of crisis, active relaxation acts as a type of resistance or even a way out. Here, resting is proposed as a pre-requisite to sex, complicity marking the blurring of bodies as they relax into each other, in a performance of powerful womanhood that asserts its demands of comfort with patient force.

“Lounge” was an opening performance of Tanztage 2023, together with “Bang Bang Bodies”, and seemed certainly to the taste of the Berlin dance world, who ambled out into their night’s activities with a palpable, satisfied energy.