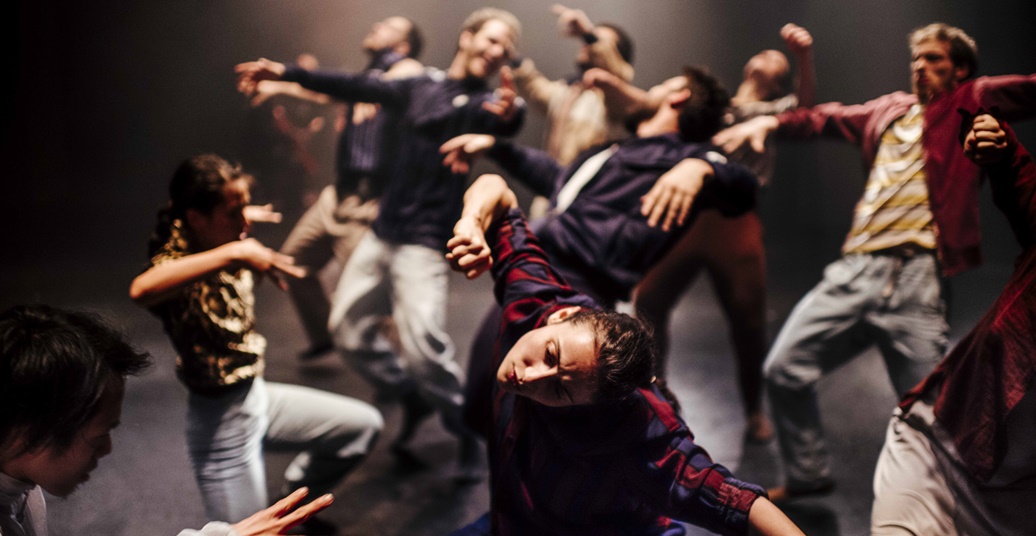 Israeli choreographer Hofesh Shechter is something of an international superstar in the world of contemporary dance. One whose pieces have been successfully touring the world for years. He is now a guest at the Haus der Berliner Festspiele with his piece “Grand Finale”.

Israeli choreographer Hofesh Shechter is something of an international superstar in the world of contemporary dance. One whose pieces have been successfully touring the world for years. He is now a guest at the Haus der Berliner Festspiele with his piece “Grand Finale”.

Hofesh Shechter stands for a type of dance untypical in Berlin. A dance that operates nearly like a spectacle, made for large stages and a sizable audience. So, characteristics that aren’t per se the norm for the Berlin dance scene, in which virtuoso dancers’ bodies are frequently deconstructed and circumvented from a post-modern perspective. In which artistic works are often closely tied to theoretical discourses and societal issues, and, like the fine arts, are often dominated by conceptual approaches and a higher degree of abstraction.

At the same time, dance enthusiasts flock to these kinds of guest performances, which one seeks in vain at locales dedicated to the independent scene (so-called Freie Szene) like Uferstudios. People, who jump to their feet for standing ovations at the end of a performance, who can get enthusiastic about dancing bodies, even when there is no theoretical superstructure. Dancers who have learned a craft, for whom dance is associated with physical effort. Those who were probably cast aside over the last ten years in Berlin.

This reputed imbalance between people inside the scene, between spectacle and art, virtuosity and understatement, dance-dance and conceptual dance, state theater and ‘Freie Szene’ , and perhaps between Berlin as a dance bubble and the rest of the world is what followed me the whole evening.

In any case, any hopes for spectacular dance-art in the sense of virtuoso movement were certainly fulfilled. The nine exceptional dancers wore themselves out in rough, powerful, dangerously fast movement sequences, which sometimes recalled primitive tribal dances, sometimes hip-hop, and as such always exuded virtuosic excellence and at the same time crude resistance. The trademark of Hofesh Shechter’s choreography: dancing brilliance meets punk. There is often dancing in “sloppy” unison, synchronized but with individualized anomalies (everyone flinging their arms however they want): the hard thumping musical rhythms flow into techno sounds, they penetrate right into the audience’s bodies creating a kind of pull together with the crude, highly-explosive movement quality that is almost impossible to physically escape. It is this virtuosity in combination with this rough style of movement and music that is so fascinating and physically captivating for the audience.

Even more confusing is the other images produced on stage: female dancers suddenly collapsing only to be taken into the arms of male dancers and manipulated (tossed about) in a sequence lasting several minutes – certainly a subject for debate from a gender politics perspective.
Like a flash, disjointed narratives pop up conveying an impression of complete arbitrariness: expressive gestures like wide-opened mouths and military greetings, impromptu love scenes and kisses, abrupt music shifts to French chansons or jazz result in a stringing together of scenes that alternately steer the whole thing towards slapstick or soppy kitsch. Aesthetically, it all threatens to tip into a mix between vaudeville and musical, which unfortunately gradually leaves a stale aftertaste regardless of how rousing the dance sequence might be.

There is actually no text about the piece in the program but instead only a quote from Shechter: that, in his opinion, what he wants to say with the piece does not matter, but rather what the audience experiences (which I agree with). Nevertheless, it seems as if these images, charged with meaning, have no purpose other than shallow entertainment. As if there were no further pursuit of anything and it might just be about nothing. As if more entertaining dance that appeals to the masses must automatically be less artistically relevant.

Consequently, the second part following the intermission is one single finale, which continues swinging towards its climax with driving choreography and stage effects only to end with a gentle love scene as its outro – by now at least it is obvious that we’re at a musical. A place where punk can’t believably exist in bodily form since it is canceled out by slick showy dramaturgy.