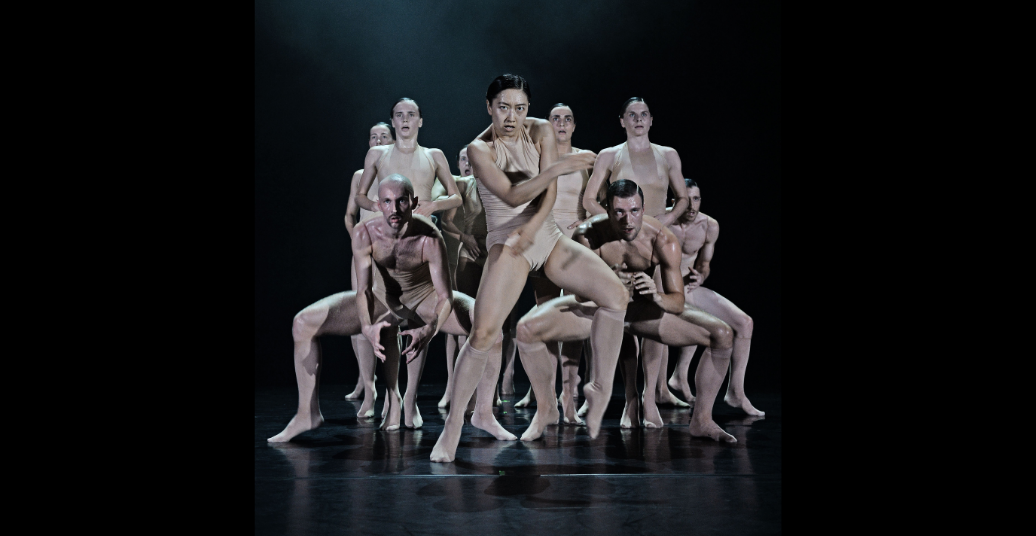 LAS (Light Art Space) is presenting This is Not a Love Show, a series of dance performances at Kraftwerk Berlin by choreographers Sharon Eyal & Gai Behar. The six performances run between December 2021 and January 2022 and include the Berlin-premiere of “Soul Chain” and “Promise” performed by tanzmainz, “Half Life” performed by the Staatsballet Berlin (2018), and L-E-V Dance Company will present the trilogy “LOV3” from its repertoire in their first Berlin appearance. “Soul Chain”, created for and performed by tanzmainz dance company, opened the series last weekend featuring a choreography explicitly engaged with techno and a corporeal understanding of multidirectional bodies.

“Soul Chain” was the winner of Der Faust prize for choreography in 2018, and, on its first Berlin showing, immediately resonates with the city and its inhabitants. Like a blast from the near past, but lived today with the ferocity of our present pandemic time, choreographer Sharon Eyal and co-creator Gai Behar envision and forge a choreography through the human form that expands one’s expectations of what it means to see a dance performance. In “Soul Chain” everything is already right there, on stage, together with the audience. This is a recognisable choreographic signature of Eyal’s work and in tune with Behar’s contribution, who is a former party producer and multidisciplinary art events curator in Tel Aviv. There are no props, no theatrical narratives, no descriptive elements, and nor are there appealing and cute costumes. Nevertheless, the vision that emerges is compelling, to such an extent that I can’t take off my eyes from the performance, and I feel my body vibrating together with those of the performers. Eyal writes: ‘I believe in the story that comes from inside the body’ (Eyal in Bogdan 2021), and these multifaceted stories take my breath away as I feel myself resonating with such eloquent bodies and movement dynamics.

Showing these works by Eyal and Behar at Kraftwerk Berlin adds an essential element to the presentation, not just for the fact that it is an unconventional theatrical space – a feature in line with the creative path pursued for a number of years by Eyal and Behar – but also because this specific location represents a direct connection to the city of Berlin itself. Kraftwerk Berlin is a vast and iconic industrial space which hosts several music and art events (for instance Berlin Atonal), and, just downstairs, is home to the famous Tresor club. At present, the huge second-floor space hosts an installation by Robert Irwin, also curated Light Art Space. Eyal and Behar’s performance takes place within a square lit by neon lights between the concrete columns of the ground floor. The audience is positioned on three sides of the performing space, and on all sides the landscape is composed of rows of columns. From the beginning of the piece, I am aware that my gaze will be partially obstructed by these columns. The neon lights seem to create a barrier. The music is loud. Two dancers in pale leotards and long pale socks enter on half-point with their hands on their hips. They lean backwards. A series of duets and trios follow until the entire corps du ballet is on the stage. The dancers keep changing the position of their arms and hands, shifting them from their ribcages, to their hips, down to their genitals, and then occasionally bending their elbows upwards.

As a spectator, I feel I am being observed by the dancers, while, at the same time, their synchronicity and pace resembles a video-game, or perhaps as if they are readying themselves to go into battle. Even though the score, composed by Eyal and Behar’s long-term collaborator Ori Lichtik, maintains a techno beat, it shifts through genres by adding in elements of pop and cool tango before returning to techno. The choreography too makes references to tango and samba, de-structuring their basic steps and then reassembling them into an abstract dance. The result is a continuous wave of group movement, where each dancer keeps their own identity as soloists frequently emerge at the side or back of the stage.

From the half-point to a grand plié à la seconde (a kind of squat with open legs), and a new rhythmic section starts. The visual alters dramatically with the performers unexpectedly forming a large circle, in stark contrast to the group choreographies that came before it. The dancers lift their hands to the ceiling, while before, they had remained almost constantly in contact with their bodies. They gather together into a tight accumulation of bodies, snake-like in shape. Their hands shift over their necks and their bellies. This seemingly never-ending wave of bodies pushes against the floor until the end of the performance. The light fades and the dancers retreat to the back of the stage where most of them remain, motionless. Two or three dancers keep moving, repeating the same movement patterns.

Defined as a ‘marriage between dance and electronic music’ in the programme notes, “Soul Chain” presents love as a multi-individual production, where many disciplined dancers’ bodies move through an apparently undisciplined choreographic frame. In this indiscipline, love could be interpreted as an instinctual pulse, able to dismantle and then reconstruct a collection of forms in movement.

In an email exchange with Bettina Kames, director of LAS and Amira Gad, the organisation’s head of programmes, they tell me about their desire to experiment with ‘formats, combining and mixing genres, offering a multiplicity of experiences as well as working with artists to expand the scope of their interdisciplinary practice.’ In this light, they describe the presentation of the work of Eyal and Behar as being ‘experimental and interdisciplinary, which felt very attuned to LAS’s mission’ and, evidently, also in tune with Eyal and Behar’s intention to present their work in unconventional venues. This impulse is also present Lichtik’s music, where, continues Gad, the ‘… energy of the pieces comes from exactly this integrative approach.’ Berlin responded to the dance series enthusiastically and sold out in just a few days, which was, according to Gad, a ‘testament to Eyal & Behar’s work.’ At the same time, Gad highlights the strong desire that allowed the shows to take place ‘together against all odds’ during the current pandemic situation.

‘I don’t want to see the choreography, I want to see the magic.’ These words are written in the programme and also displayed in hall of Kraftwerk. Written by Eyal, it is a sentence which sounds both like a prediction of what is happening on stage, and also a manifesto for times (and loves) to come.

Reference: Bogdan, Ana (2021), Sharon Eyal “The Story Comes from Inside the Body”, available at https://the-talks.com/interview/sharon-eyal/?fbclid=IwAR1l8XbZtuVd4uq_-Ije6suwlmhaqp6hFsOjDuv4sDzVdDaLtY53MMwNWVY.

More information about this, and the upcoming shows of This is Not a Love Show. A Series of Dance Performances at Kraftwerk Berlin by Sharon Eyal & Gai Behar (11 December 2021 — 15 January 2022) is available under LAS: lightartspace.org.