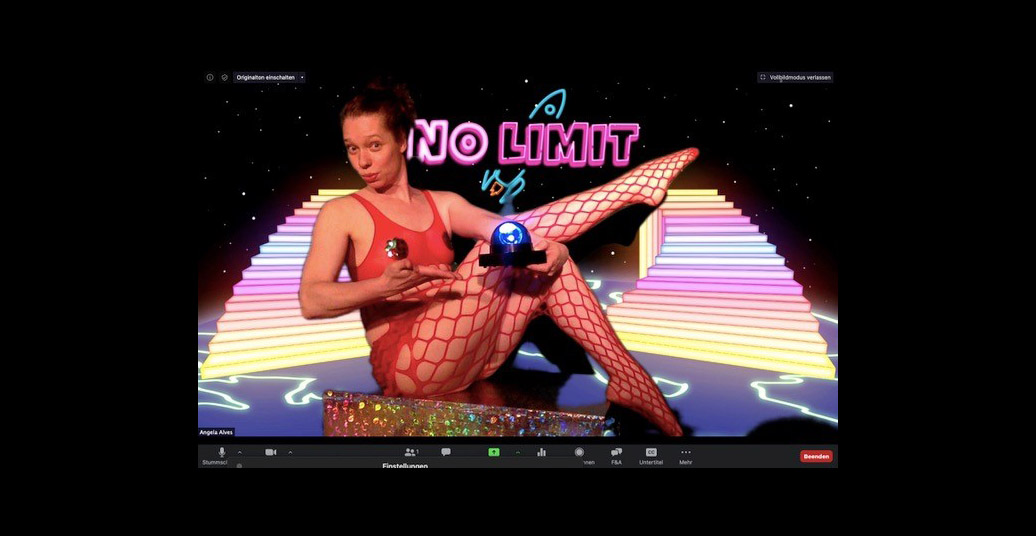 In a garish tutti frutti aesthetic, Angela Alves’ “NO LIMIT” (Zoom premiere 16 June 2020 at Sophiensæle) stages a distorted world in which the handicapped make up the normative majority and the unhandicapped suffer from syndromes like CCD (Can’t Calm Down) and KNL (Knows No Limits). The game show provides us with a lesson in accessibility without lecturing us.

Pre corona days, I wouldn’t have watched “NO LIMIT”. I would’ve been home in bed with a freshly operated on, swollen knee that I couldn’t bend and that had to be cooled and elevated – and I would’ve watched something uninspired on Netflix. I wouldn’t have subjected myself to the  effort of hobbling to the Sophiensæle and having to sit still for an hour with a constant twitch in my knee.

For a while now, the Sophiensæle has been offering so-called “Relaxed Performances”, which are intended to offer greater inclusivity in a casual atmosphere. You’re allowed to go in and out, to talk quietly, and to move around. That would make Angela Alves’ “NO LIMIT” a hyper-relaxed performance since the show wasn’t performed live as planned, but rather in the virtual realm with the help of Zoom. And it is precisely this aspect of the digital that permitted me – temporarily immobilized – access.

As the cool pack rests on my elevated knee, “NO LIMIT” begins. The show, staged in a garish nineties aesthetic, aims to create the greatest possible level of accessibility for viewers. Its rhythm is determined by translation aids,  arranged in parallel,  in the form of audio descriptions, sign language, subtitles and the option to have the descriptions read out loud in a chat room by a screen reader. The pauses that arise, translation cuts and duplications and the resulting decelerated tempo, sometimes make those of us unhandicapped, with our efficiency thinking, impatient.  And they make quite clear that our expectations of how best to use time productively and efficiently are extremely questionable and egocentric. That is why all the performers leave plenty of time for their introductions. The sign language translator, Gal, the deaf moderator, Athina, the narrator, Simone, the dancer (and artistic director of the show), Angela, the musician, Christoph all describe in great detail how they look and their settings. Their garishly colored retro costumes, starry-sky backdrop, and the rainbow stairs are obviously invoking the parody RTL show “Tutti Frutti”from the early 90s – and “Tutti Frutti for All” is what today’s invitation to “NO LIMIT” promises. It takes on an interactive show element; a questionnaire where we can share – but are not obligated to – whether we have e.g. a disability, whether we’re part of the norm, or whether we know what a crip is  – namely, a community of people that feels like it belongs to a discriminated minority.

The actual main part of the show clarifies what it’s all about. During a talk show sequence in which Angela Alves, the personified representative of the minority of unhandicapped people, is interviewed by Athina, we discover: people without disabilities would have a harder time here if we didn’t join in solidarity to ensure their inclusion. Because it’s the handicapped community that defines the norms here. But Angela doesn’t want to be included. She calls for empathy, the recognition of her unique individual maladies (CCD, KNL), and needs. She immediately gets sympathy for her lamentable minority status: Athina refers to it as “diversity aid”. And how does she dance despite her lack of handicap? But then Angela gets cut off… No one really wants to know the answer.

Towards the end of the show, as  Angela, Athina, and Gal perform a kind of senseless sign language choreography in three Zoom windows, a choreography that becomes evermore chaotic, Simone’s linguistic translation reaches its limits. And it hits me: this is not about me –handicapped or unhandicapped – being able to follow everything. Instead it’s about a dedicated serenity that cares less about definitions of inclusion and more about a constant renegotiation of our social norms. Especially now.

“NO LIMIT” by Angela Alves will be performed once again tonight, 18 June 2020, at 8pm in the Sophiensæle. Duration: 75 minutes. Participation via Zoom. You can get a personalized access link to the webinar with pre-registration (ticket price: 5 euros).