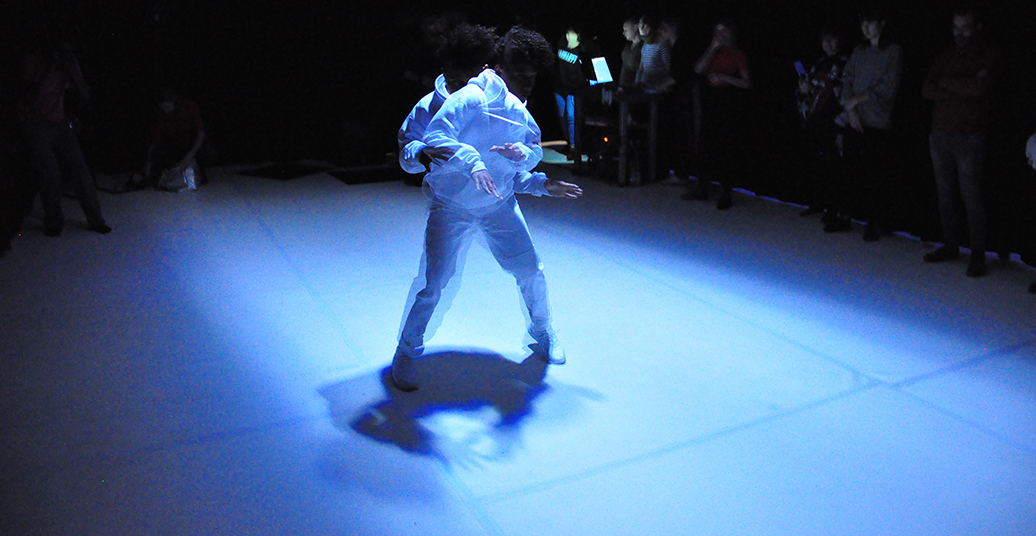 Upstairs in the gallery of Ballhaus Naunynstrasse, Colombian performer and choreographer, Jao Moon, manages to permeate through identities, boundaries, memories and aesthetics in his solo “Memory of Dislocation – Exactly the Same in the Opposite Direction”, showing from 7 – 10 December.

The techno beat is pumping as I walk up the stairs, along a narrow corridor, and into a blackness broken apart by intense strobe lights. The entrance to the performance feels exactly like entering a club, so I’m actually surprised to see only one person dancing in a spotlight. Was I subconsciously envisioning a room packed with writhing, sweaty bodies? I quickly switch from club mode to performance mode (the buttons are very close to each other) as I adjust to the flashing strobe. In the middle of the room, Jao Moon is dressed in a white tracksuit, feet planted on the floor with his arms outstretched in front of him, as his body rocks to the rhythm, dancing in that almost meditative style of someone who is going to be on the dance floor for a very long time.

We were told before the performance that we are free to move around the space. So I take a few steps closer, taking the chance to really look at someone dancing in strobe light. I stare long and hard at the way in which the brutal yet brief blasts of light cut up his figure and his motion. The strobe makes his body seem flat and two-dimensional, and almost absent – a semi-presence – as though the other half of him is elsewhere. After a while, he almost starts to look like a hologram. I’m absorbed in thinking about the word ‘dislocation’ in the title, and just as it gets interesting – the strobe and the music stop.

What? No! Too soon! In the sudden silence, Moon walks across the smallish room, towards the wall and a kind of installation of metal frames and coloured fluorescent lights. The high performativity of the dance club drops into something more mundane as he switches on each fluorescent tube in turn, cautiously stepping around and through the frames. Moon’s negotiation through this fixed structure gradually transforms into a negotiation through the audience as he crosses the room again, dancing through us, fixing us with a curious gaze that is very gently confronting and almost flirtatious. His movements make me think of the beautiful child that Vogue and Butoh could make.

This sequence is the first of a series of carefully crafted vignettes in which Moon uses an interplay of lights, movement, story, and gesture to speak to the way in which the body is not fixed, but continually transforming, simultaneously responding to and creating its environs. His use of space and lighting is simple, yet incredibly effective. Throughout the work he reveals and enshrouds different parts of the room according to the tale he is weaving about boundaries, and the ability of the body to transcend them.

In this shifting landscape, Moon’s body remains the centrepiece, holding my attention firmly, and directing our gaze with his. His arms and hands skilfully evoke a myriad of associations – the violent stance of a certain kind of masculinity, and the way a gun is held with that cinematic tilt of the head – but then these same hands glimmer, and become the holy gestures of Mary, Jesus, and a whole gang of Catholic icons. In the next moment, these sanctified postures speed up and transform into those of a Divine Queen, voguing for her life on the dance floor. Moon approaches these themes with nuance and courage, refined by his unique performance quality. I couldn’t help but wish, however, that he had taken more time, interrogated more, trusted more, and stayed with each scene for longer. The images he created were strong, but all too often they felt rushed. Almost before I had the chance to immerse myself in it, the piece was over. It couldn’t have lasted more than 35 minutes.

On the way home, the piece is still with me and I re-read the programme and its references to ‘the Colombian champeta’. As I absorb the too-short Wikipedia entry on my phone about this style of music and dance, which originated with enslaved peoples brought from Africa to the Atlantic coast of Colombia, I imagine a vital embodied practice of sustenance, resistance, and self-reclamation. These politics echo within Jao Moon’s work. I reflect on his question in the programme: Can ‘his body can become a space where all these boundaries dissolve’? Considering how I first engaged with Moon’s work by finding myself in a Berlin club, and now I leave listening to champeta, I feel convinced that the answer is ‘yes’.