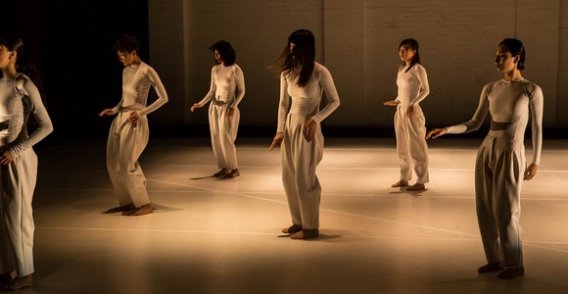 This year’s Potsdamer Tanztage brings together another unabashedly diverse programme. While German, Belgian, and Canadian components are heaviest (this year celebrates the fifth anniversary of the frabrik’s residency exchange with Quebec), works range from Yasmin Godder (Israel), Delavallet Bidiefono/Compagnie Baninga (Brazzaville/Paris), and Zsuzsa Rózsavölgyi (Budapest), as well as the HZT, who finds its place here with a selection of Masters student works in the late evening.

It is rare to find a festival with such breadth and with such a strong web of community support. Yet with a curatorial focus that is neither resolutely political nor pointedly aesthetic, Potsdamer Tanztage does what few others do: line up, side by side, radically different approaches to space, time, authorship, history, and aesthetics.

Two such examples are Gent-based Louis Vanhaverbeke’s “Multiverse”, a veritable smattering of plastic matter, sound, and gesture pulled together with creative transformations and humour, and Seoul-based Bora Kim, who offers a set of serious, philosophical, and dramatic studies on themes of language, communication, and nature.

Shown thrice over the weekend and advertised with the catchy phrase “choosing is losing”, Louis Vanhaverbeke’s piece begins with the careful placement of a small white box, a stack of books, and a record player, setting himself up off centre for his first gesture of the evening, viz. to sit atop the white box, play beats, and read rhythmically But the key thing here is perhaps not the story itself (indeed the reverb is strong and the words consequently muddy) but the provocation he sets out between chance (how, rifling through the pages, he appears to read) and construction (as the translation via projection of what he reads suggests), and the relationality between objects and the human form.

So “Multiverse” begins, and, prologue complete, Vanhaverbeke introduces us to his collection of objects, their use, potentiality, and cuteness. While his body remains resolutely pedestrian, occasionally some transformation—such as Vanhaverbeke’s emergence from behind an umbrella nearly nude but for a hard plastic box around his pelvis, a milk crate X loin cloth X chastity belt—is strange enough to move beyond caricature and give a glimmer of another universe, in which things evolved just ever so slightly differently. In these moments there is a tremendous and weird and uncanny beauty.

Most of the time, however, the scope of perspective shrinks back to our world, and, perhaps because of this, we seem to nearly all find a great deal of humour in it. Equipped with a wonderful and genuine creativity and inventiveness, Vanhaverbeke builds a stage within the stage (formed from festive triangle flag banners) in which he delivers perhaps his ultimate moment in the show: the deliberate cooking of a crepe in a frying pan, and its singular and solemn flip. Everyone cheers! Everyone whoops! Vanhaverbeke exposes and acknowledges our daily tasks in all their physical skill, emotional risk, and circus seriousness. We all relate; we feel together.

The persistent beats that play throughout are catchy but hammering, sometimes failing to boost the energy but rather highlighting the gap between what we could be feeling and the repetitiveness of the act on stage (e.g. running in a circle); and yet, opportunities to really push against or question the beat seldom occur. The retention of caricature narrows imaginative possibilities, and, perhaps more importantly, pulls our focus toward the human figure and its agency. Combined with relatively short dialogues between the various objects, we see a figure manipulating the world, rather than releasing the objects to discover their own destinies – they ultimately get put back in their place.

Toward the end, under the starlight of a disco ball, a constructed spaceship sails through the stage seas: he we are pulled out far into the galaxy, peering down at the lego marvels – cities, buildings, states, and systems – we humans create. Perhaps all of the unfinished gestures through the piece (choosing is losing, choosing is losing) only reveal the moments of virtuosity more startlingly. At least, together, we can stare bleakly and cosily at our beautiful, bright, plastic wreck of a world.

A change of gears is needed for the next evening of work, a double bill from young Korean choreographer Bora Kim. Reflecting on the difficulty of expression, personal biography, and the self-imposition of limits, Kim opens the evening with “A Long Talk with Oneself”. From the back of the space a figure, gooey and moist, draped in a filmy, embryonic gauze and the play of shadows, stammers toward a microphone at the front and centre of the stage, always approaching, never succeeding in her goal of speech. As her limbs twist, tight and constrained, the lights dim and a video emerges: black and white images, earnest pop-classical tones, the story of a tiny baby, a grandmother, of traumatic loss. With a message that the choreographer has shed the limits she has imposed on herself, we shift our focus back to the figure at front: the juxtaposition in style between the heartfelt video and the extreme performativity of the body on stage is startling. We see her shake and tremble before a dark hooded figure approaches, takes off his jacket, wiping the drool from her mouth, the sweat between her legs, the floor beneath, lifts her stiff body, and exits. An immense feeling of helplessness presides; there is a feeling of ambiguity as to whether this removal, this shedding is a loss, or a relief, or both. We – and it – remain foreign, if moved.

After a short intermission, we return to a very different picture: white floors, tape, tissue, fabric, white, white, white. In “Tail Language”, the second half of Kim’s evening, we encounter a white world inhabited by arcing, twisting, bending creatures who brim with effervescence on the border between the recognisable and habitable, and the acrobatic and unfamiliar. Eight performers teeter on this uncanny edge resisting full circus explosion: backs bend, splits are stood in, and feet and ribs run separate ways, yet each virtuosic suggestion is but a means to a greater sensibility. Each flick of the neck or whip of the toe is slightly different and distinct: each figure pulls us like little black holes into the stickiness of their own space-time while pushing against this individuality to create a common mode of temporality thick enough to let us enter.

A certain hybrid emerges before us as the sounds of birds bleed into the sounds of a modem – which is which, what is where? We see the sincerity of the technological exactitude in these bodes combined with the organic mush of their torsos and the drips of their long black hair, and glimpse the body here as the site of future nature.

An outsider emerges, he struggles with how to perform his task. His walk is unsubtle, heavy, relaxed. As he reconfigures the space with this different sense of time and weight, as well as practical interventions in the stage space, is he our set designer, our choreographer, our architect, or our mad scientist? But despite protestations that he is not a he, but a creature first and only, and that this part has elsewhere been played by a female body, his externally directed actions engender a cold cut through our shared temporality.

The music is relentless and surely moments would be equally if not more interesting with less sonic drive. Dance in unison comes upon us suddenly and without apparent necessity, and it would be gratifying to see the connection between the performers blossom with time. Something remains ultimately very distant. Yet the textures and set are careful, thoughtful, tape peeled from the floor with teeth and tongue creating tonged diagonals.

We leave Kim’s show with memories of twisted snowflakes, silent animals, and human hybrids. While Vanhaverbeke engages us in vivid detail and consequent possibilities, Kim illuminates a frosty, nearly magical world. Vanhaverbeke charms; Kim enchants. His world is bright, wistful, and absurd; hers both dangerous and full of potential. Visually, they could not be further apart; brought together they allow us to appreciate the scope of contemporary dance at this moment and the context that allows for such different visions of the world.